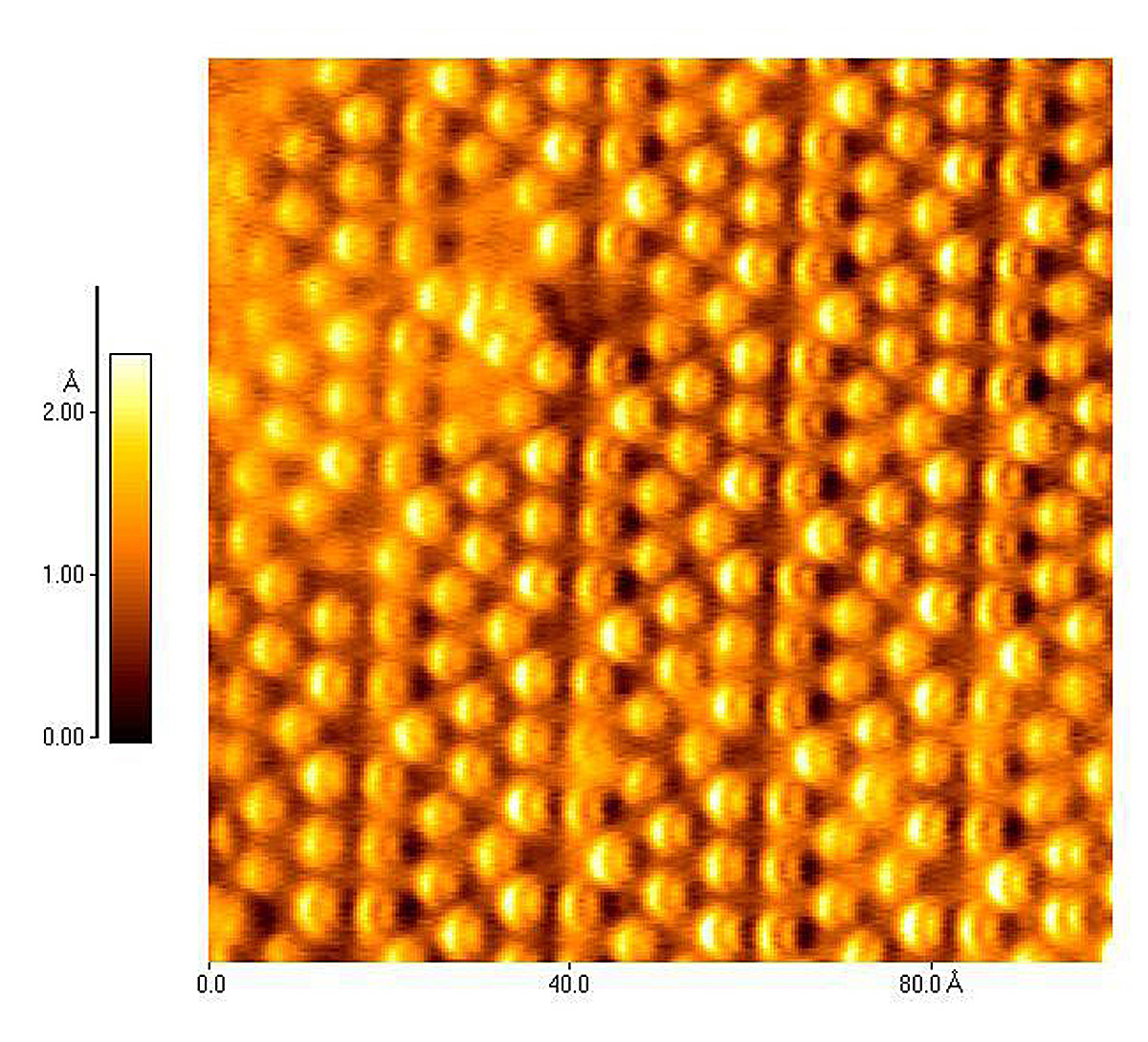 June 2, 2003 — By crunching numbers on a supercomputer for six months, University of Utah researchers showed it is possible for an atomic force microscope to make images of the wing-shaped paths of minuscule electrons as they orbit atoms.

The new study – led by Feng Liu, a professor of materials science and engineering – supports a controversial 2000 study by German physicist Franz Giessibl, who claimed he was able to use an atomic force microscope to detect subatomic structures in silicon atoms.

An atom is made of a core or nucleus surrounded by rapidly orbiting electrons. Depending on an atom’s size, the electrons’ orbital paths – called atomic orbitals – have different geometries, often shaped like figure-eights so they point out in different directions like atomic “wings.”

Liu says his extensive computations at the University of Utah’s Center for High Performance Computing “demonstrated the feasibility of seeing not only the atom but also the atomic orbitals when imaging the [silicon] surface with atomic force microscopy.”

The study has been accepted for publication in the journal Physical Review Letters. Liu conducted the study with graduate student Minghuang Huang and with Martin Cuma, a computational chemist at the Center for High Performance Computing.

The researchers conclude it is feasible to “see” the orbitals by sensing the forces created by the electrons as they whip around an atom.

The supercomputer calculations showed that to detect an atom’s orbitals, the atomic force microscope’s tip needs to be within 2 to 3 angstroms of the atoms being scanned – less than the diameter of an atom. At that distance, the microscope tip becomes sensitive to forces exerted by wing-like orbitals extending at angles from the silicon atom being scanned.

(An angstrom is one 10-billionth of a meter, or one-tenth of a nanometer. An atom is about 3 angstroms wide. A piece of paper is about 1 million angstroms thick.)

An atomic force microscope has a vibrating tip that narrows to one or two atoms, usually silicon or tungsten. The tip almost touches the surface it is scanning. The microscope measures the chemical bonding force between the tip and the atoms in the scanned surface. The force is stronger if the tip is above an atom and weaker if it is above a space between atoms. An image of the surface is created as the tip scans the surface to make many such measurements.

“The Nobel Prize-winning invention of the scanning tunneling microscope (STM) and the atomic force microscope (AFM) have allowed us to directly see individual atoms on a solid surface,” Liu said. “However, atoms generally appear as a single protrusion or blur in STM and AFM images because the microscopes can’t resolve the details of atomic orbitals.”

Because a solid’s material properties depend on the structure of its surface, atomic force microscopes are used to determine what materials are suitable as semiconductors, to make electronic devices and to manipulate atoms into desired structures. Liu says practical uses of the microscopes will expand when they routinely make images of atomic orbitals:

— Some industrial chemical reactions are speeded or “catalyzed” when they occur on the surface of a piece of metal. If atomic force microscopes can make images of atomic orbitals on the metal surface, engineers will be able to “see much more detail of the atoms and the bonds between them,” helping industry design better metals and catalysts for a wide variety of manufacturing processes.

— An ability to “see” not only atoms but also the orbital paths of their electrons will aid the field of nanotechnology, which Liu defines as building materials or even machines “atom by atom.”

— Atomic force microscopes now can reveal defects in materials by showing where atoms are missing. If the microscopes can routinely “see” orbitals, that would reveal how the remaining atoms are bonding together around the defect.

Liu said his study involved using a supercomputer to simulate the use of an atomic force microscope to scan a surface of silicon atoms – the stuff of which computer semiconductor chips are made – using calculations that follow the rules of quantum mechanics, the theory that governs the motions of electrons.

“To run these calculations took a half a year on a parallel supercomputer,” he says.

He and his colleagues used 64 “nodes” or individual personal computers out of more than 300 PCs that comprise ICE Box, a “cluster” supercomputer made by assembling numerous off-the-shelf PCs. The individual PCs run together in “parallel” to perform complex computations. Some of the work also was conducted on a Cray supercomputer at a National Science Foundation supercomputer center in Pittsburgh.

One criticism of the 2000 study by Giessibl – a physicist at Germany’s University of Augsburg – was that the apparent image of orbitals on silicon atoms might be due to an imprecise mathematical description of the interaction between the atom on the tip of the atomic force microscope and the silicon atoms being scanned by the microscope.

Liu says he overcame that criticism because his calculations provided a very accurate simulation of how the microscope tip interacts with silicon atoms on the scanned surface.

Some scientists argued the crescent-shaped shadows on Giessibl’s silicon atoms were not orbitals but were artifacts, or non-natural images somehow introduced by the process of using the microscope. Liu says his study cannot directly address that criticism. But he adds that his study does prove the principle that atomic orbitals can be imaged, whether anyone has already seen them or not.

Reaction to the Utah Findings

Giessibl says that since his 2000 study, his laboratory has used atomic force microscopy many times to detect subatomic features on silicon and other materials.

“Experimental and theoretical work on subatomic resolution opens a new domain of probing matter on atomic and subatomic length scales – a sure boon to nanoscience, to which Prof. Liu’s work represents a highly important contribution,” Giessibl says.

University of Utah researchers who did not work on Liu’s study say they do not know whether Giessibl actually detected atomic orbitals, but they say Liu’s study shows an atomic force microscope theoretically could do so.

Physicist Julio Facelli, director of the Center for High Performance Computing, says he has “no doubt” Liu is correct in concluding it is possible to make images of orbitals, but that does not necessarily prove Giessibl’s image really shows them.

“In principle, it should be possible to see structure on the scale of orbitals,” says Clayton Williams, a professor of physics and an expert on atomic-scale imaging. “There is not a fundamental constraint saying it’s not possible.”

University of Utah physics Chair Z. Valy Vardeny notes: “People were skeptical historically about being able to see atoms. But it was proven to be right.”