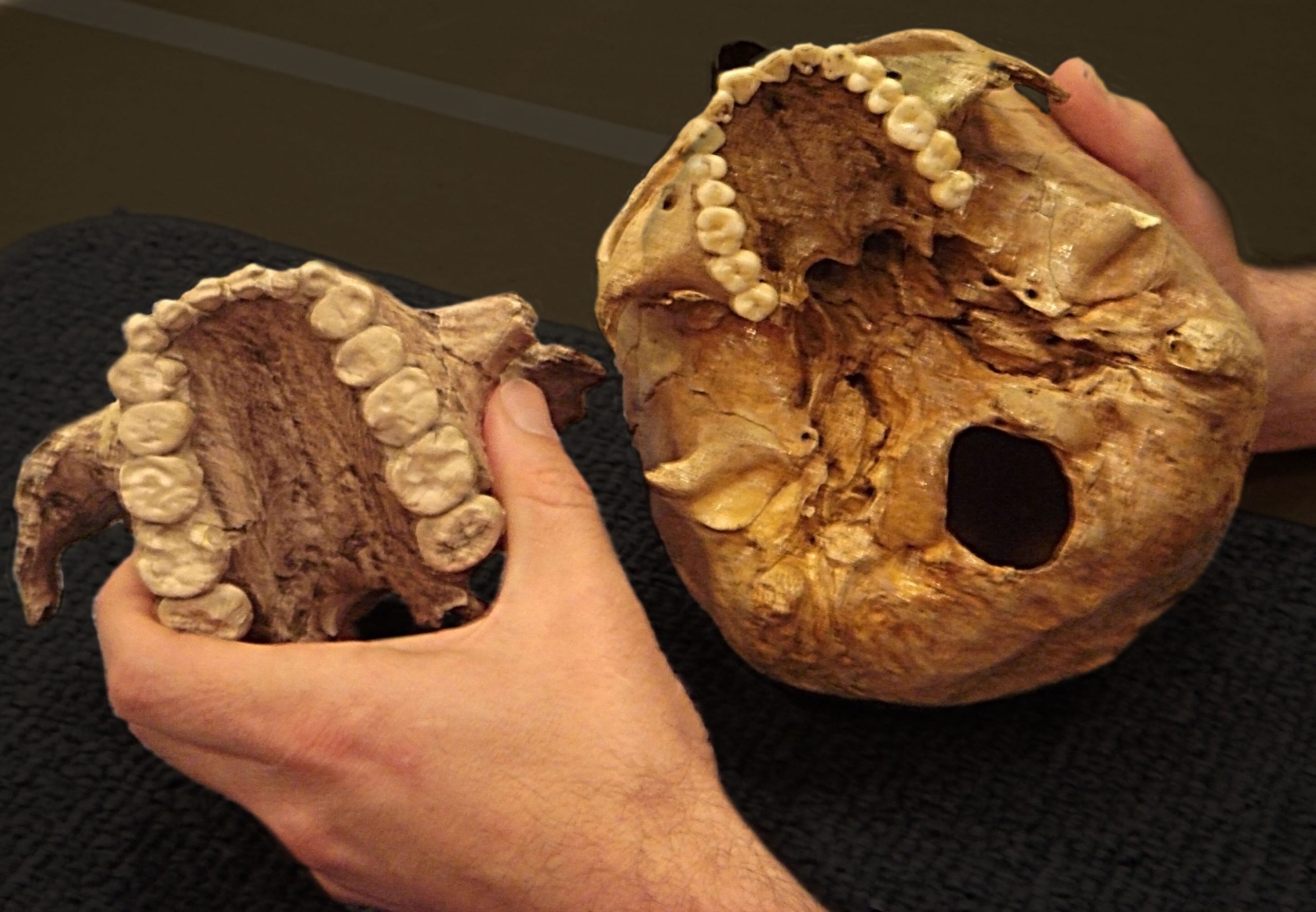 Embargoed by the journal Proceedings of the National Academy of Sciences for release at 1 p.m. MDT, Monday May 2, 2011

May 2, 2011 – For decades, a 2.3 million- to 1.2 million-year-old human relative named Paranthropus boisei has been nicknamed Nutcracker Man because of his big, flat molar teeth and thick, powerful jaw. But a definitive new University of Utah study shows that Nutcracker Man didn’t eat nuts, but instead chewed grasses and possibly sedges – a discovery that upsets conventional wisdom about early humanity’s diet.

“It most likely was eating grass, and most definitely was not cracking nuts,” says geochemist Thure Cerling, lead author of the study published in the May 2 online edition of the journal Proceedings of the National Academy of Sciences.

Study co-author Kevin Uno, a University of Utah Ph.D. student in geology, adds: “This study provides evidence that Paranthropus boisei was not cracking nuts, but was instead eating mainly tropical grasses or sedges. It was not competing for food with most other primates, who ate fruits, leaves and nuts; but with grazers – zebras’ ancestors, suids [ancestors of pigs and warthogs] and hippos.”

Cerling and colleagues determined the extinct, upright-walking Paranthropus boisei‘s diet by analyzing carbon isotope ratios in the tooth enamel of 24 teeth from 22 individuals who lived between 1.4 million and 1.9 million years ago and were closely related to and once thought part of the genus of human ancestors named Australopithecus. Both extinct Paranthropus ­­and the human genus Homo arose from Australopithecus.

Drilling for Evidence of Prehistoric Dinners

Cerling used a drill to pulverize some tooth enamel into powder, but only 2 milligrams per tooth and only from the broken surface of broken teeth, leaving the original surfaces intact for future study. Still, there was anticipation among officials at the National Museums of Kenya, where the teeth are housed.

“The sound of the drill may make a lot of paleontologists and museum staff cringe, but as the results of this study show, it provides new information that we can’t get at any other way,” Uno says. “And we’ve gotten very good at drilling.”

Carbon isotope ratios in tooth enamel can reveal whether ancient animals ate plants that used what is called C3 photosynthesis – trees (and the leaves, nuts and fruits they produce), shrubs, cool-season grasses, herbs and forbs – or plants such as warm-season or tropical grasses and sedges that use what is known as C4 photosynthesis. (Sedges vaguely resemble grasses, but their stems’ cross-sections usually are triangular, which means “sedges have edges” when rotated between thumb and finger.)

The study found that not only did the Nutcracker Man Paranthropus boisei not eat nuts or other C3 plant products, but dined more heavily on C4 plants like grasses than any other early human, human ancestor or human relative studied to date. Only an extinct species of grass-eating baboon had a diet so dominated by C4 plants.

Carbon isotopes showed the 22 individuals had diets averaging 77 percent C4 plants such as grasses, ranging from a low of 61 percent to a high of 91 percent.

That’s statistically indistinguishable from grass diets of grazing animals that lived at the same time: the ancestors of zebras, pigs and warthogs, and hippos, Cerling says.

“They were competing with them,” he adds. “They were eating at the same table.”

The researchers also analyzed oxygen isotope composition in the fossil teeth, which indicated Paranthropus boisei lived in semi-arid savannah with woodlands along rivers or lakes.

Research in 2008 on two teeth from Nutcracker Man in Tanzania also indicated the creatures ate a diet of grasses and perhaps sedges. But with teeth from 22 individuals, the new study shows the species was eating grass and other C4 plants over a much longer time period (from 1.4 million to 1.9 million years ago) and bigger geographic area (a 500-mile-wide swath of East Africa) than was known before.

“Wherever we find this creature, it is predominantly eating tropical grasses or perhaps sedges, which include papyrus,” Cerling says.

Rethinking the Diets of Early Human Ancestors and Relatives

The new study of Nutcracker Man may provoke a major change in how we view the diets of other early humans and human relatives.

“Much of the previous work has been on the size and shape of the teeth, along with microwear analysis,” Cerling says. “Our results [on Paranthropus boisei] are completely different than the conclusions based on 50-plus years of research along those lines. It stands to reason that other conclusions about other species also will require revision. P. boisei greatly extends the range of potential diets for early human lineages.”

Specifically, scientists have believed human ancestors in the genus Australopithecus – which gave rise to now-extinct Paranthropus and to Homo or early humans – also had head and tooth features suggesting they ate hard objects like nuts.

Cerling says carbon isotope ratios in australopiths’ teeth now should be studied, since the Paranthropus findings bring in to question interpretations that are made without isotopic information on diets.

“The high proportion of C4 vegetation in the diet of Paranthropus boisei makes it different from any other hominin to date, even its closest relative, Paranthropus robustus from southern Africa,” Uno says. “The results make an excellent case for isotope analysis of teeth from other members of our family tree, especially from East Africa.”

A Brief Biography of ‘Nutcracker Man’

The cranium of the extinct early human relative now known as Paranthropus boisei was discovered by Meave Leakey’s in-laws, Mary and Louis Leakey, in 1959 at Olduvai Gorge in Tanzania, and helped put the Leakeys on the world stage.

Dated at 1.75 million years old, it initially was known as Zinjanthropus boisei (zinj for an African religion named Zanj, anthropus for ape-human and boisei after expedition benefactor Charles Boise) and later as Australopithecus boisei, before scientists decided it deserved a separate genus, making it Paranthropus boisei.

The discovery of other P. boisei fossils revealed the species lived in East Africa (including Kenya and Ethiopia) from 2.3 million years ago to 1.2 million years ago. The short creatures had big, flat premolars and molars; thick tooth enamel; muscle-attachment surfaces for large chewing muscles; and powerful jaws. Those characteristics earned Paranthropus boisei the nickname Nutcracker Man – a name that has been attributed to South African paleoanthropologist Phillip Tobias, a colleague of the Leakeys.

According to Dale Peterson’s biography of anthropologist Jane Goodall, the Leakeys took privately to calling the Zinj skull “Dear Boy,” and that it was Tobias who convinced them to switch the genus to Australopithecus and who also suggested that the thick molars made the skull look like a children’s wooden toy named Nutcracker Man.

“So while the rather obscure and academic debates about naming and grouping the skull kept all the specialists entertained, for the public at large, this same fossil became simply Nutcracker Man,” Peterson wrote.

“Nutcracker Man never has been used in the scientific literature, but that’s the common name,” Cerling says.