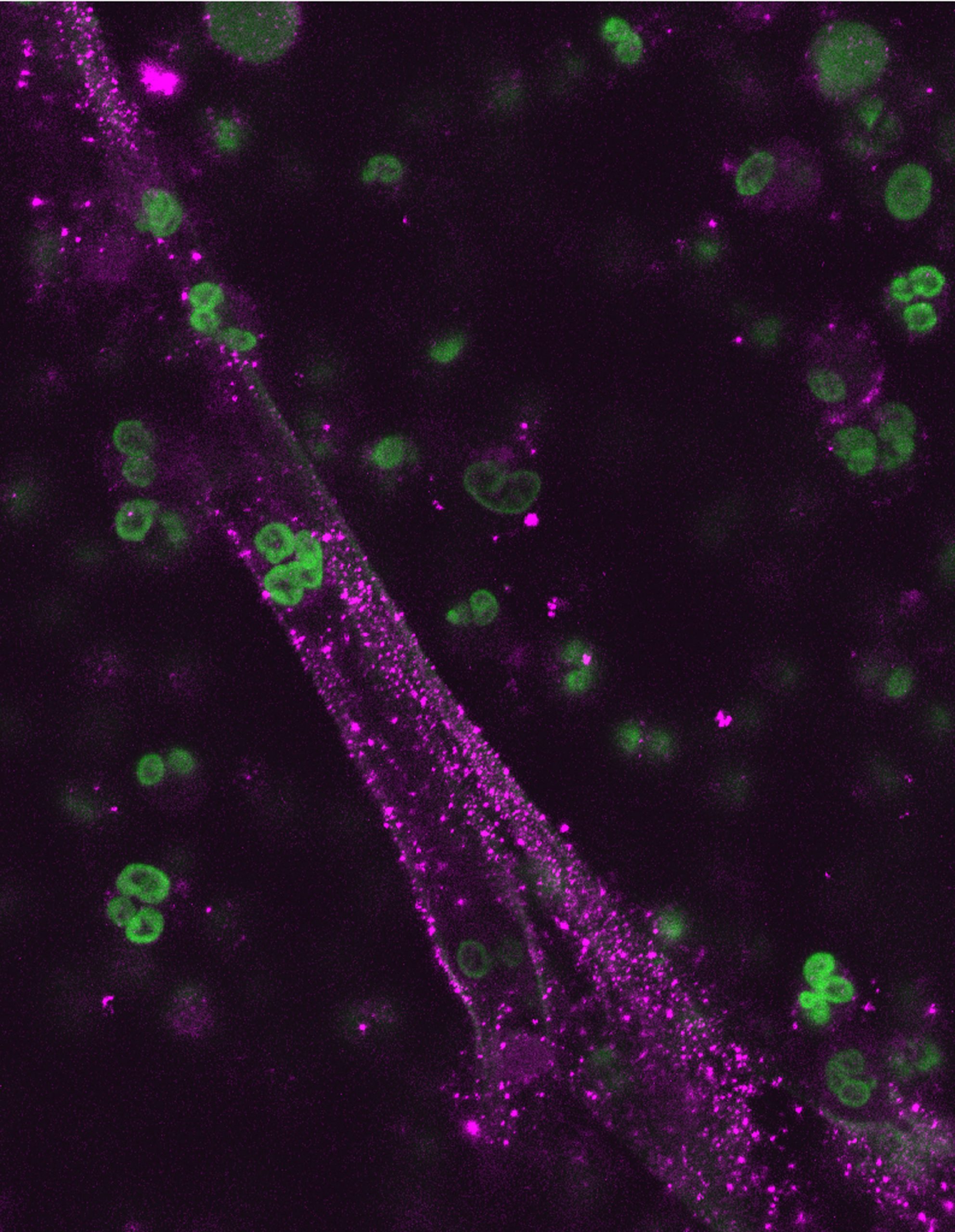 March 9, 2009 — When locked in mortal combat with infection, some mature white blood cells have a formidable weapon: they literally cast a DNA net-called a neutrophil extracellular trap (NET)-that captures and kills bacteria that invade the human body. But the ability to form this “death” NET is missing in the white blood cells of newborn infants, born either at term or prematurely, and that may explain why millions of newborns worldwide are at higher risk for a potentially deadly blood infection, University of Utah medical researchers have discovered.

The finding, published online in the journal Blood, is important because it provides insight into defects in the body’s defense against sepsis, a blood infection that poses a major risk for preterm and full-term babies and occurs in up to 25 percent of newborns in some areas of the world. “Neonatal neutrophil dysfunction-a term for these white blood cell abnormalities-affects many infants, because there are so many premature births across the globe,” said Christian C. Yost, M.D., assistant professor of pediatrics and the study’s lead author. “It’s a huge public health issue.”

The defect in NET formation also may contribute to other serious infections that plague neonates, such as pneumonia and meningitis, and its identification could generate leads to new drugs for treatment of severe infections in newborn infants.

White blood cells are one of the body’s primary weapons to fight infection. When an infection arises, white blood cells called neutrophils are dispatched as part of the first line of defense. Neutrophils live only a few hours, and previously it was thought that when they die in combat with bacterial invaders their defensive mission was over. Recently, however, it was discovered that in the death throes of fighting infection, neutrophils from adults eject a protein mixture of nuclear material and antibacterial proteins that forms a NET-like structure that captures and kills bacteria even as the blood cell dies.

But that doesn’t hold true for the neutraphils in newborn babies. Yost, a neonatal intensive care physician, and his colleagues collected small amounts of umbilical cord blood from 16 premature babies treated at Primary Children’s Medical Center in Salt Lake City. He found that the infants’ neutrophils didn’t eject the nuclear mixture and, subsequently, couldn’t form the death NET to kill bacteria. “There was no evidence at all that infant neutralphils make the NETs,” Yost said. “Certainly, neutraphils from premature babies don’t make them.”

Yost and the study’s senior author, Guy A. Zimmerman, M.D., professor of internal medicine and director of the University’s program in Human Molecular Biology and Genetics, suspect this may be an important reason why preterm and full-term newborns are at a higher risk for severe infections such as sepsis and have such fragile immune systems.

Zimmerman compares the neutrophils’ death NETS to those used as weapons by gladiators in ancient Rome. “We don’t know what causes the defect that prevents neutrophils in preterm babies from forming the NET,” said Zimmerman. “That regulation process really is unknown.”

He and Yost suspect the NET formation defect may stem from deficiency of one or more key factors in the regulatory mechanisms that govern the NET-generating process, and that these factors have not had time to develop in the neutrophils of newborn infants-particularly premature infants. Previously, a group of European investigators, who studied only adult neutrophils, published evidence that molecules called reactive oxygen species (ROS) trigger formation of NETs by these white blood cells. ROS are produced by neutrophils in response to stress and infection. Yost’s experiments unequivocally demonstrated that ROS are not sufficient to alone induce NET formation by neonatal neutrophils, however, indicating that other essential regulatory molecules are lacking.

It’s possible that defining which molecules are missing could lead to approaches to hasten their development or to replace them, according to Yost. “Since our discovery of deficient NET formation by neutrophils from premature babies, a list of at least three or four candidate molecules to test has emerged from ongoing studies,” he said.

Because there is no “knockout” mouse model for neonatal neutrophil dysfunction, Yost had to conduct his research with the blood of human infants. This kind of work is a prime example of translational research, in which relevance to human disease is directly examined.

Preterm births, typically defined as births occurring at 37 weeks or earlier, have increased 20 percent in the United States since 1990, according to a recent Institute of Medicine report. Preterm births in Utah went up 24 percent from 1995 to 2005, the March of Dimes said last November in a report that gave the state and nation “D” grades in how they’re addressing the problem of preterm births.