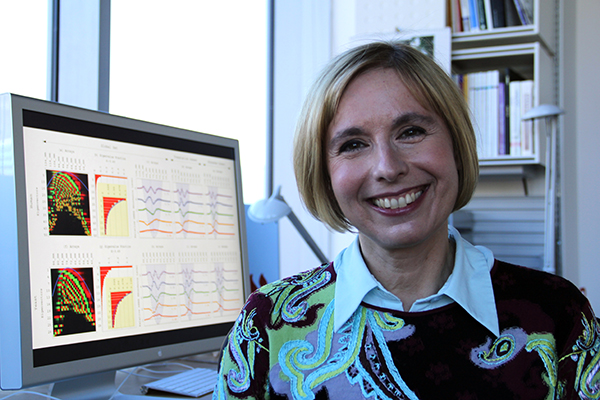 April 15, 2015 – Nearly anyone touched by ovarian cancer will tell you: it’s devastating. It’s bad enough that cancer in almost 80 percent of patients reaches advanced stages before diagnosis, and that most patients are expected to die within five years. But just as painfully, roughly one quarter of women diagnosed have no warning that they are resistant to platinum-based chemotherapy, the main line of defense, nor that they will likely have 18 months to live.

Frustratingly, the diagnosis, prognosis, and even treatment of ovarian cancer have remained largely unchanged for 30 years. Until now, the best indicator for how a woman will fare, and how her cancer should be treated, has been the tumor’s stage at diagnosis.

Now, University of Utah scientists have uncovered patterns of DNA anomalies that predict a woman’s outcome significantly better than tumor stage. In addition, these patterns are the first known indicator of how well a woman will respond to platinum therapy. Published in the journal PLOS ONE, the patterns were discovered by using a new mathematical technique in the analysis of DNA profiles from the Cancer Genome Atlas, a national database containing data from hundreds of ovarian cancer patients.

“We believe this is a first step toward bringing ovarian cancer into the age of precision medicine,” says team leader Orly Alter, Ph.D., USTAR associate professor of bioengineering, adjunct associate professor of human genetics, and faculty member of the Scientific Computing and Imaging Institute. Pending experimental revalidation in the clinic, the patterns could be the basis of a personalized prognostic and diagnostic laboratory test. This test would predict both the patient’s survival and the tumor’s sensitivity to platinum-based chemotherapy, and doctors could tailor treatment accordingly.