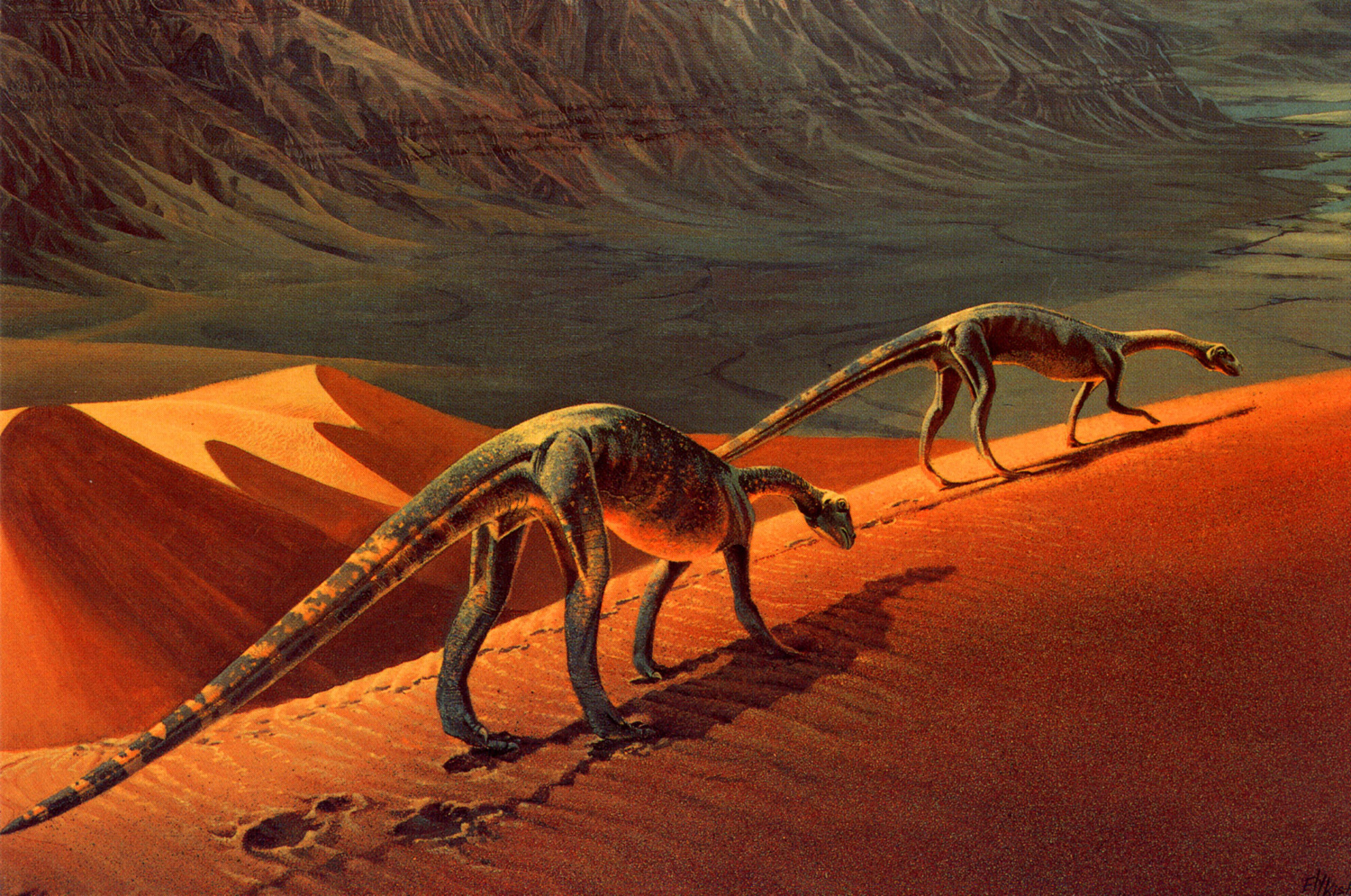 March 23, 2010 — Utah’s red rocks – world-famous attractions at numerous national parks, monuments and state parks – have yielded a rare skeleton of a new species of plant-eating dinosaur that lived 185 million years ago and may have been buried alive by a collapsing sand dune. The discovery confirms the widespread success of sauropodomorph dinosaurs during the Early Jurassic Period.

Until now, Utah’s red rocks were known only for a few scattered bones and dinosaur footprints. However, discovery of a remarkably preserved partial skeleton is being published in the March 24 edition of PLoS ONE, the online open-access journal produced by the Public Library of Science.

The study was conducted by Joseph Sertich, a former University of Utah master’s student and current Stony Brook University Ph.D. student, and Mark Loewen, a paleontologist at the Utah Museum of Natural History and instructor in the Department of Geology and Geophysics at the University of Utah.

The new dinosaur species is named Seitaad ruessi (SAY-eet-AWD ROO-ess-EYE), which is derived from the Navajo word, “Seit’aad,” a sand-desert monster from the Navajo (Diné) creation legend that swallowed its victims in sand dunes (the skeleton of Seitaad had been “swallowed” in a fossilized sand dune when it was discovered); and Ruess, after the artist, poet, naturalist and explorer Everett Ruess who mysteriously disappeared in the red rock country of southern Utah in 1934 at age 20.

Seitaad ruessi is part of a group of dinosaurs known as sauropodomorphs. Sauropodomorphs were distributed across the globe during the Early Jurassic, when all of the continents were still together in the supercontinent named Pangaea. Millions of years later, sauropodomorphs evolved into gigantic sauropods, long-necked plant eaters whose fossils are well known from elsewhere in Utah, including Dinosaur National Monument.

A Dinosaur Buried by the Dunes

The skeleton of Seitaad was discovered protruding from the multicolored cliffs of Navajo Sandstone in 2004 by local historian and artist, Joe Pachak, while hiking in the Comb Ridge area near Bluff, Utah. His discovery, located just below an ancestral Puebloan (Anasazi) cliff-dwelling, was subsequently reported to the federal Bureau of Land Management (BLM) and the Utah Museum of Natural History. Museum paleontologists and crews excavated and collected the specimen in 2005.

The beautifully preserved specimen includes most bones of the skeleton, except for the head, and parts of the neck and tail. Seitaad was found in fossilized sand dunes that were part of a vast desert that covered the region nearly 185 million years ago during the Jurassic Period. Research suggests that the animal was buried in a suddenly collapsing sand dune that engulfed the remains and stood them on their head. The missing parts of the skeleton were lost to erosion over the past thousand years, but were almost certainly visible when Native Americans lived on the cliff just above the skeleton.

In life, the animal would have stood about 3 to 4 feet (about 1 meter) tall at the hips and was 10 to 15 feet (3 to 4.5 meters) long. It would have weighed approximately 150 to 200 pounds (70 to 90 kilograms), and could walk on two or four legs. Like its later gigantic relatives, Seitaad most likely ate plants.

Early sauropodomorphs, including Seitaad, had long necks and tails with small heads and leaf-shaped teeth, suggesting that they were specialized for an herbivorous (plant-eating) diet. These same traits were carried on in their much larger descendents, the sauropods. “Although Seitaad was preserved in a sand dune, this ancient desert must have included wetter areas with enough plants to support these smaller dinosaurs and other animals,” said Sertich. “Just like in deserts today, life would have been difficult in Utah’s ancient ‘sand sea.'”

According to Loewen, “We know from geologic evidence that seasonal rainstorms like today’s summer monsoons provided much of the moisture in this sand sea filling ponds and other low spots between the sand dunes.”

The closest relatives of Seitaad are known from similar-aged rocks in South America and southern Africa. Other, less complete, fossils from northern Arizona hinted at the presence of sauropodomorphs like Seitaad, but none were complete enough to understand exactly what species was living in the American Southwest. The discovery of Seitaad confirms that this group of dinosaurs was extremely widespread and successful during the Early Jurassic, approximately 175 million to 200 million years ago.

Although the Navajo Sandstone is exposed all over Utah and Arizona, fossils are extremely rare and we have not yet learned much about the animals that lived in this giant desert. Other animals that lived in the Navajo Sandstone were all relatively small animals, including a carnivorous dinosaur, crocodile relatives and proto-mammals called tritylodonts. Even though Seitaad was quite small, it was likely the largest herbivore during this time period in southern Utah. “This new find suggests that there may be more dinosaurs yet to be discovered in these rocks,” said Sertich.

The Study DOES NOT say that…