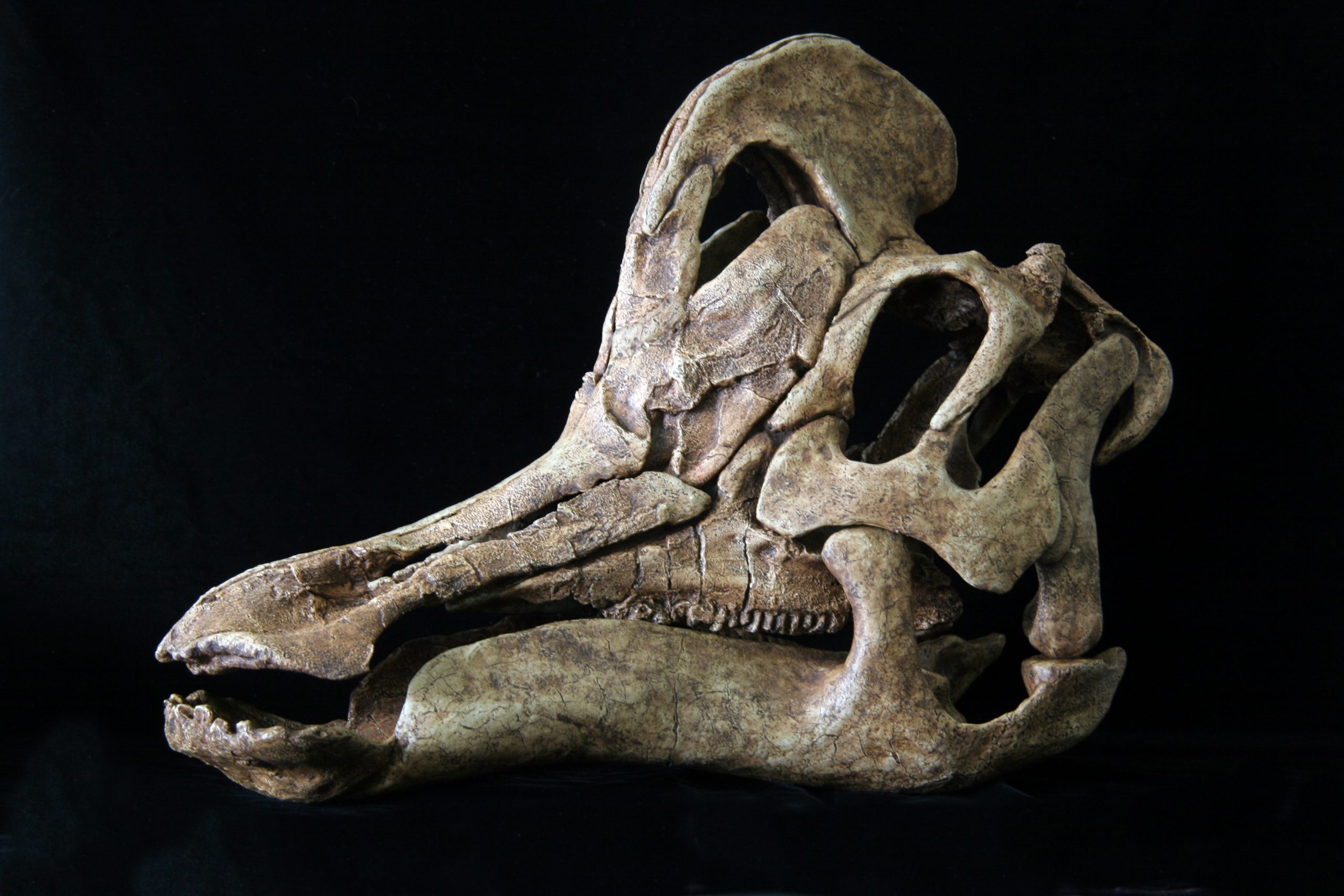 Feb. 12, 2008 – A new species of dinosaur unearthed in Mexico is giving scientists fresh insights into the ancient history of western North America, according to an international research team led by scientists from the Utah Museum of Natural History at the University of Utah.

“To date, the dinosaur record from Mexico has been sparse,” said Terry Gates, a paleontologist with the Utah Museum of Natural History, Utah’s designated natural history museum.

The new creature – aptly dubbed Velafrons coahuilensis – was a massive plant-eater belonging to a group of duck-billed dinosaurs, or hadrosaurs. “Velafrons is a combination of Latin and Spanish meaning “sailed forehead,” in reference to the large sail-like crest that grew atop the dinosaur’s head,” said Rosario Gomez, director of the paleontology program in Coahuila, Mexico. “The second part of the name honors the state of Coahuila in north-central Mexico, where the specimen was found,” said Gomez.

Utah Museum of Natural History paleontologists teamed up with researchers from the Utah Geological Survey; Coordinacion de Paleontologia, Secretaria de Educacion y Cultura de Coahuila the Museo del Desierto, in Saltillo, Coahuila, Mexico; and the Royal Tyrrell Museum, in Drumheller, Alberta, Canada, to excavate and study the 72-million-year-old specimen. The species was announced in the December edition of the Journal of Vertebrate Paleontology.

Mexico’s arid climate poses challenges for dinosaur hunters, Gates explained. With little rainfall, there is minimal erosion, which means fewer fossils ever see daylight. Yet the fossils emerging from Coahuila turn out to be a vital part of the North American story for the latter part of the Age of Dinosaurs.

For most of the Late Cretaceous, high global sea levels resulted in flooding of the central, low-lying portion of North America. As a result, a warm, shallow sea extended from the Arctic Ocean to the Gulf of Mexico, splitting the continent in two. Dinosaurs living on the long, narrow, peninsula-like western landmass – known as Laramidia, or more simply, “West America,” – occupied only a narrow belt of plains that were sandwiched between the seaway to the east and rising mountains to the west. Central America had not formed at the time, which made Mexico the southern tip of the continent.

In many ways, the Late Cretaceous is the best-understood time during the Age of Dinosaurs, thanks in large part to over 120 years of dinosaur hunting in Canada, Montana, and the Dakotas. “Yet the dinosaurs from Mexico have remained a mystery,” noted Scott Sampson, a Utah Museum of Natural History paleontologist and co-author of the study.

Gates described the arid, desert terrain where the dinosaur was recovered as nothing like Mexico during the Late Cretaceous. About 72 million years ago, this region was a humid estuary near the southernmost tip of West America, an area where salt water from the ocean mixed with fresh water from rivers. Many of the dinosaur bones are covered with fossilized snails and marine clams, indicating that these animals inhabited environments near the shore.

In addition to isolated skeletons, the researchers found large bonebeds of jumbled duck-bill and horned dinosaur skeletons. These sites appear to represent mass death events, perhaps associated with powerful storms like those that are known to occur around the southern tips of Africa and South America today.

Until recent years, there have been few large-scale paleontological projects in Mexico focused on the Age of Dinosaurs. Velafrons stands as one of the first dinosaurs to be named from Mexico.

The creature comes from a rock unit known as the Cerro del Pueblo Formation, which dates to around 71.5 million to 72.5 million years ago. The skeleton was discovered in the early 1990s on the outskirts of a small town called Rincon Colorado, about 27 miles west of the city of Saltillo.

The skeleton was found by Martha Carolina Aguillon, and excavated over the course of several seasons by members of the Coordinacion de Paleontologia de la Secretaria de Educacion y Cultura de Coahuila under the direction of Jim Kirkland, of the Utah Geological Survey, and Rene Hernandez-Rivera, Instituto de Geología, Universidad Nacional Autónoma de México. Much of the excavation work was completed by volunteers as a participant-funded research project organized by the Dinamation International Society and the staff of the Museo del Desierto.

On becoming Utah’s state paleontologist, Kirkland encouraged Scott Sampson and his students to take over his role on the Coahuila Paleontological research project.

Then, in 2002, Sampson spearheaded the first of two paleontological expeditions to Coahuila, by securing funds from the University of Utah and National Geographic Society. The Utah Museum of Natural History crew, along with other researchers from Mexico, Canada, and the U.S., undertook the daunting task of completing the hadrosaur excavation, in addition to locating several other sites that contain new dinosaur species.

Armed with a jackhammer and shovels, the crew returned to the Rincon Colorado dig site, where they labored for two weeks through 12 feet of overburden, eventually uncovering the ancient skull. Upon its arrival at the Utah Museum of Natural History, the skull then required another two years of meticulous preparation by Jerry Golden, a skilled volunteer at the museum.

Based on the development of several bony features on the skull and skeleton, the scientists believe that this animal was still a youngster at the time of death. Nevertheless, although not yet fully grown, Velafrons would have been on the order of 25 feet long, suggesting an impressive adult size of 30 feet to 35 feet.

Gates explained that Velafrons represents the first occurrence of a crested duck-billed dinosaur in this region of North America. “The crested duck-billed dinosaurs are an extraordinary example of vertebrate evolution,” he said. Unlike other animals where the nose bone lies in front of their eyes, these dinosaurs transformed their skulls so that the nose rested atop their skull. The snout extended backward, up their face, in order to fill the gap left by the relocated nose bone.

Interestingly, breathing was not straight-forward for Velafrons and its kin. Air flowed through a series of passages from the snout, into their crest, and finally inserting through a hole above their eyes. Scientists are uncertain what Velafrons‘ fan-shaped crest would have been used for, but a leading hypothesis suggests mate attraction, which explains the complex nasal passages as a possible musical instrument.

In addition to Velafrons, the most recent expeditions recovered remains of a second kind of duck-bill dinosaur, as well as a plant-eating horned dinosaur. Like its famous cousin, Triceratops, the new Coahuila horned dinosaur bore a massive horn over each eye and a long bony frill projecting rearward. The Cerro del Pueblo Formation has also yielded remains of large and small carnivores, including large tyrannosaurs (though smaller, older relatives of T. rex), and more diminutive Velociraptor-like predators armed with sickle-claws on their feet. As well as an abundance of fossilized bones, researchers discovered the largest assemblage of dinosaur track ways known from Mexico, a large area crisscrossed with the tracks of different kinds of dinosaurs. In all, the emerging picture is one of a diverse group of dinosaurs, perhaps representing an entirely new set of species.

Gates noted that this project is about much more than naming new dinosaurs. Each new species represents another vital piece of the puzzle as we attempt to comprehend the world of dinosaurs.

As might be suspected, paleontologists are excited about the future paleontological potential of this area.

“I am amazed at how prolific this region is,” Gates said of the amount of material waiting to be collected. “Given the large number of fossils, the high quality preservation, and the great research team that is working this area, more spectacular discoveries are just around the corner.”

“Dinosaurs from this particular period are important because this is a time that is relatively poorly understood,” said Don Brinkman, a project researcher from Canada’s Royal Tyrrell Museum of Paleontology, who along with Aguillon, is studying the non-dinosaur vertebrates found at the site, including turtles, fish, and lizards. “The locality in Mexico goes a long way to filling in a gap in our knowledge of the record of changes in dinosaur assemblages throughout the Late Cretaceous era.”

Few dinosaurs from this time period are known in North America outside the Drumheller region of Alberta, which is where the Royal Tyrrell Museum is located. Brinkman explained that researchers now have two points of comparison to examine not only different dinosaurs, but also different ecologies.

Research teams want to find examples of plant life and smaller animals that co-existed with these dinosaurs. This information can be compared with collections made in other parts of North America to understand north-south variations in species and entire ecosystems.

Sampson added, “Now that we’ve cracked open this amazing window into the world of dinosaurs, we look forward to future expeditions that will undoubtedly reveal more of Mexico’s ancient past.”

In addition to advancing the field of paleontology, the researchers hope that this project in Coahuila may encourage more tourism to the area and bring attention to the Museo del Desierto, where the original specimen will be permanently housed.