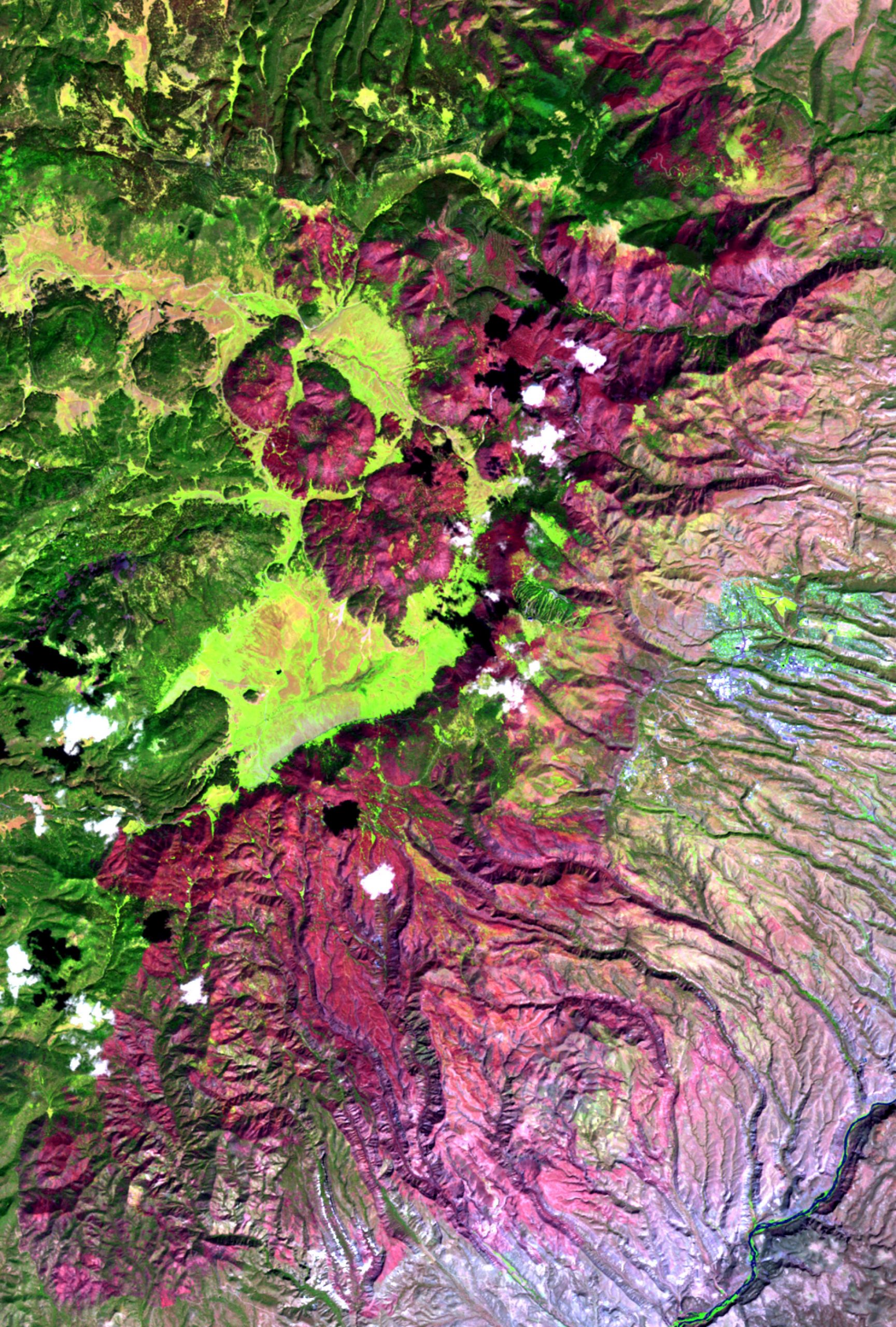 April 17, 2014 – A new study showing a 30-year trend of worsening wildfires in the western United States was led by Philip Dennison, a geographer at the University of Utah.

Below is a news release on the study issued today by the American Geophysical Union, which is publishing the study in one of its journals.

WASHINGTON – Wildfires across the western United States have been getting bigger and more frequent over the last 30 years – a trend that could continue as climate change causes temperatures to rise and drought to become more severe in the coming decades, according to new research.

The number of wildfires over 1,000 acres in size in the region stretching from Nebraska to California increased by a rate of seven fires a year from 1984 to 2011, according to a new study accepted for publication in Geophysical Research Letters, a journal published by the American Geophysical Union.

The total area these fires burned increased at a rate of nearly 90,000 acres a year – an area the size of Las Vegas, according to the study. Individually, the largest wildfires grew at a rate of 350 acres a year, the new research says.

“We looked at the probability that increases of this magnitude could be random, and in each case it was less than 1 percent,” said Philip Dennison, an associate professor of geography at the University of Utah in Salt Lake City and lead author of the paper.

The study’s authors used satellite data to measure areas burned by large fires since 1984, and then looked at climate variables, like seasonal temperature and rainfall, during the same time.

The researchers found that most areas that saw increases in fire activity also experienced increases in drought severity during the same time period. They also saw an increase in both fire activity and drought over a range of different ecosystems across the region.

“Twenty eight years is a pretty short period of record, and yet we are seeing statistically significant trends in different wildfire variables – it is striking,” said Max Moritz, a co-author of the study and a fire specialist at the University of California-Berkeley Cooperative Extension.

These trends suggest that large-scale climate changes, rather than local factors, could be driving increases in fire activity, the scientists report. The study stops short of linking the rise in number and size of fires directly to human-caused climate change. However, it says the observed changes in fire activity are in line with long-term, global fire patterns that climate models have projected will occur as temperatures increase and droughts become more severe in the coming decades due to global warming.

“Most of these trends show strong correlations with drought-related conditions which, to a large degree, agree with what we expect from climate change projections,” said Moritz.

A research ecologist not connected to the study, Jeremy Littell of the U.S. Geological Survey (USGS) at the Alaska Climate Science Center in Anchorage, Alaska, said the trends in fire activity reported in the paper resemble what would be expected from rising temperatures caused by climate change. Other factors, including invasion of non-native species and past fire management practices, are also likely contributing to the observed changes in fire activity, according to the study. Littell and Moritz said increases in fire activity in forested areas could be at least a partial response to decades of fire suppression.

“It could be that our past fire suppression has caught up with us, and an increased area burned is a response of more continuous fuel sources,” Littell said. “It could also be a response to changes in climate, or both.”

To study wildfires across the western U.S., the researchers used data from the Monitoring Trends in Burn Severity Project (MTBS). The project, supported by the U.S. Forest Service and USGS, uses satellite data to measure fires that burned more than 1,000 acres.

While other studies have looked at wildfire records over longer time periods, this is the first study to use high-resolution satellite data to examine wildfire trends over a broad range of landscapes, explained Littell. The researchers divided the region into nine distinct “ecoregions,” areas that had similar climate and vegetation. The ecoregions ranged from forested mountains to warm deserts and grasslands.

Looking at the ecoregions more closely, the authors found that the rise in fire activitywas the strongest in certain regions of the United States: across the Rocky Mountains, Sierra Nevada and Arizona- New Mexico mountains; the southwest desert in California, Nevada, Arizona, New Mexico and parts of Texas; and the southern plains across western Texas, Oklahoma, Kansas and eastern Colorado. These are the same regions that would be expected to be most severely affected by changes in climate, said Dennison.

Journalists and public information officers (PIOs) of educational and scientific institutions who have registered with AGU can download a PDF copy of this article by clicking here.

Or, you may order a copy of the final paper by emailing your request to Alexandra Branscombe. Please provide your name, the name of your publication, and your phone number.

Neither the paper nor this press release is under embargo.