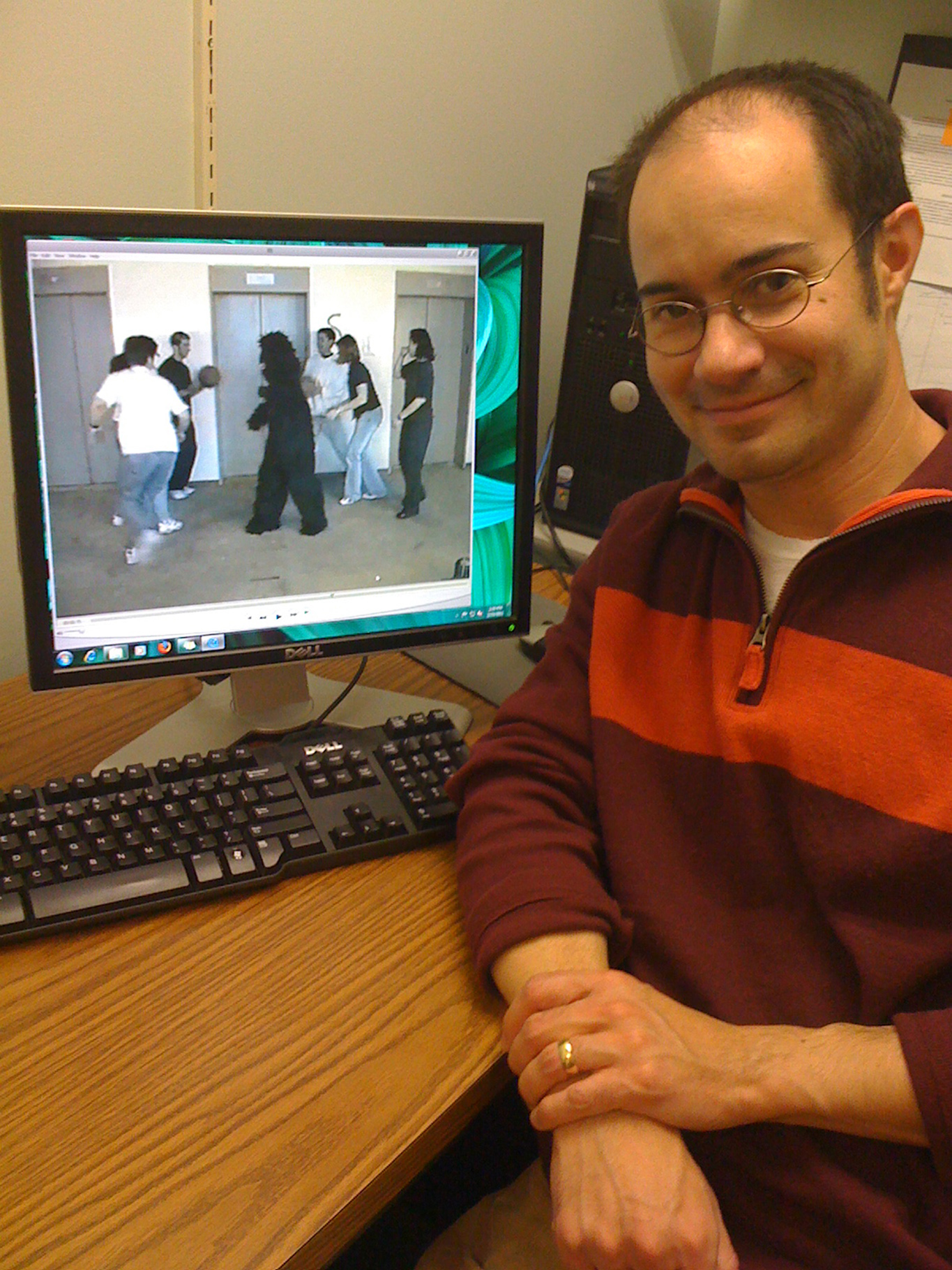 April 18, 2011 – University of Utah psychologists have learned why many people experience “inattention blindness” – the phenomenon that leaves drivers on cell phones prone to traffic accidents and makes a gorilla invisible to viewers of a famous video.

The answer: People who fail to see something right in front of them while they are focusing on something else have lower “working memory capacity” – a measure of “attentional control,” or the ability to focus attention when and where needed, and on more than one thing at a time.

“Because people are different in how well they can focus their attention, this may influence whether you’ll see something you’re not expecting, in this case, a person in a gorilla suit walking across the computer screen,” says the study’s first author, Janelle Seegmiller, a psychology doctoral student.

The study – explaining why some people are susceptible to inattention blindness and others are not – will be published in the May issue of The Journal of Experimental Psychology: Learning, Memory and Cognition.

Seegmiller conducted the research with two psychology faculty members – Jason Watson, an assistant professor, and David Strayer, a professor and leader of several studies about cell phone use and distracted driving.

“We found that people who notice the gorilla are better able to focus attention,” says Watson, also an assistant investigator with the university’s Brain Institute.

The new study used a video made famous by earlier “inattention blindness” research featured in the 2010 book “The Invisible Gorilla,” by Christopher Chabris, a psychologist at Union College in Schenectady, N.Y., and Daniel Simons, a psychologist at the University of Illinois at Urbana-Champaign.

The video depicts six actors passing a basketball. Viewers are asked to count the number of passes. Many people are so intent on counting that they fail to see a person in a gorilla suit stroll across the scene, stop briefly to thump their chest, and then walk off.

Seegmiller, Watson and Strayer did a new version of the older experiments, designed to determine the reason some people see the gorilla and others miss it.

Why are the results important?

“You can imagine that if you’re driving and road conditions aren’t very good, unexpected things can happen, and individuals with better control over attention would be more likely to notice those unexpected events without having to be explicitly told to watch for them,” Seegmiller says.

Watson adds: “The potential implications are that if we are all paying attention as we are driving, some individuals may have enough extra flexibility in their attention to notice distractions that could cause accidents. That doesn’t mean people ought to be self-distracting by talking on a cell phone while driving – even if they have better control over their attention. Our prior research has shown that very few individuals [only 2.5 percent] are capable of handling driving and talking on a cell phone without impairment. ”

Strayer has conducted studies showing that inattention blindness explains why motorists can fail to see something right in front of them – like a stop light turning green – because they are distracted by the conversation, and how motorists using cell phones impede traffic and increase their risk of traffic accidents.

The new study indicates the latter is true.

“We may be the first researchers to offer an explanation for why some people notice the gorilla and some people don’t,” Watson says.

Working memory capacity “is how much you can process in your working memory at once,” Seegmiller says. “Working memory is the stuff you are dealing with right at that moment, like trying to solve a math problem or remember your grocery list. It’s not long-term memory like remembering facts, dates and stuff you learned in school.”

The researchers studied working memory capacity because it “is a way that we measure how some people can be better than other people at focusing their attention on what they’re supposed to,” she adds.

The Utah study began with 306 psychology students who were tested with the gorilla video, but about one-third then were excluded because they had prior knowledge of the video. That left 197 students, ages 18 to 35, whose test results were analyzed.

First, the psychologists measured working memory capacity using what is known as an “operation span test.” Participants were given a set of math problems, each one of which was followed by a letter, such as “Is 8 divided by 4, then plus 3 equal to 4? A.”

Each participant was given a total of 75 of these equation-letter combinations, in sets of three to seven. For example, if a set of five equations ended with the letters A, C, D, G, P, the participant got five points for remembering ACDGP in that order. After each set of equations and letters, participants were asked to recall all the letters of each set. A few participants scored a perfect 75 score.

Participants had to get 80 percent of the math equations right to be included in the analysis. That was to ensure they focused on solving the math problems and not just on remembering the letters after the equations.

Next, the participants watched the 24-second Chabris-Simons gorilla video, which had two, three-member basketball teams (black shirts and white shirts) passing balls. Participants were asked to count bounce passes and aerial passes by the black team. Then they were asked for the two pass counts and whether they noticed anything unusual.

To remove a potential bias in the study, the researchers had to make sure the people who noticed the gorilla also were counting basketball passes; otherwise, people who weren’t counting passes would be more likely to notice the distraction. So only video viewers who were at least 80 percent accurate in counting passes were analyzed.

The Utah psychologists got results quite similar to those found by Simons and Chabris in their original study in 1999: of participants who were acceptably accurate in counting passes, 58 percent in the new study noticed the gorilla and 42 percent did not.

Put another way, they are better at multitasking.

Future studies should look for other possible explanations of why some people suffer inattention blindness and others do not, including differences in the speeds at which our brains process information, and differences in personality types, the Utah psychologists say.

For a link to the gorilla video, see: