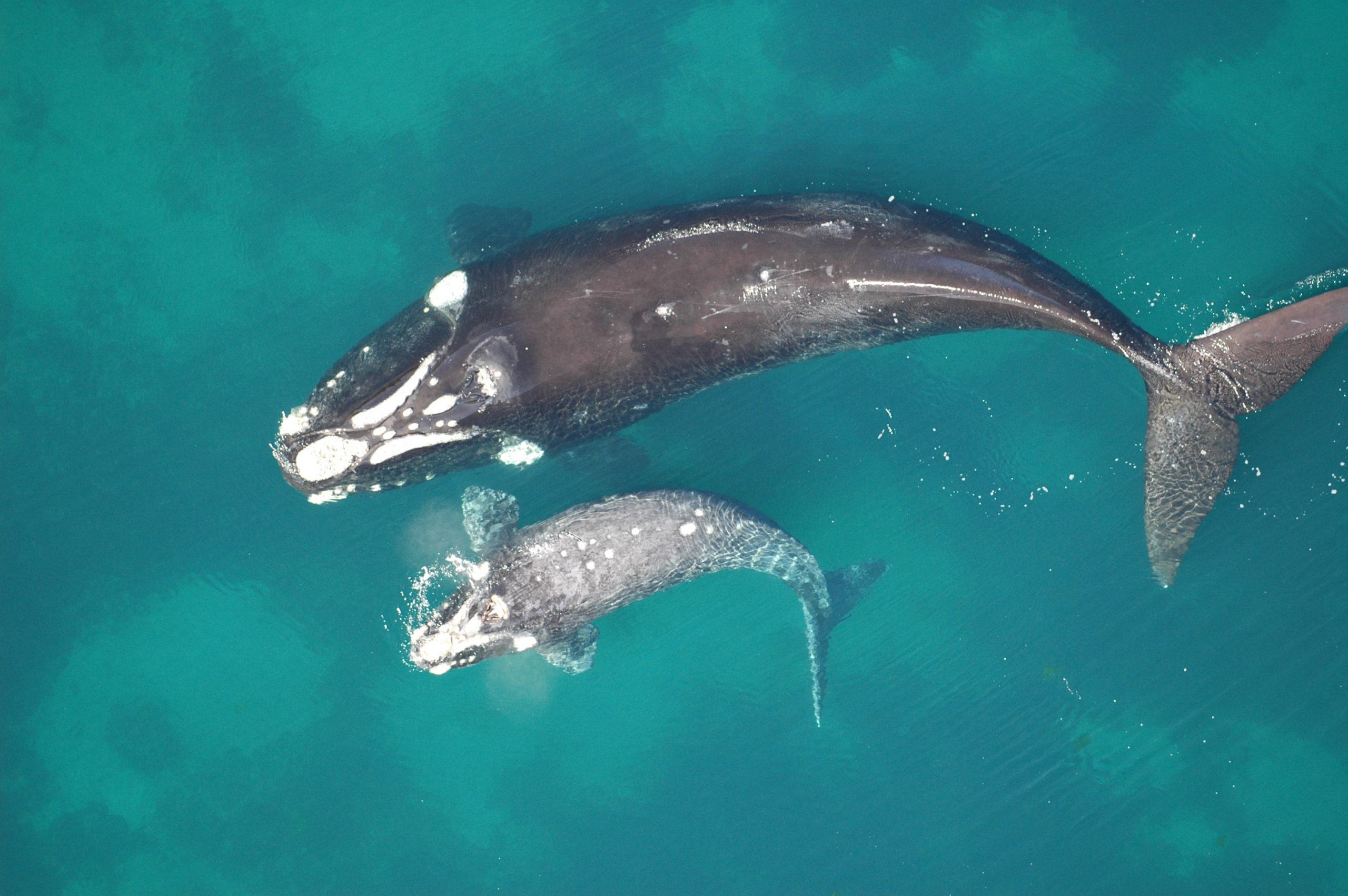 Feb. 9, 2009 – University of Utah biologists discovered that young “right whales” learn from their mothers where to eat, raising concern about their ability to find new places to feed if Earth’s changing climate disrupts their traditional dining areas.

“A primary concern is, what are whales going to do with global warming, which may change the location and abundance of their prey?” asks Vicky Rowntree, research associate professor of biology and a coauthor of the new study. “Can they adapt if they learn from their mother where to feed – or will they die?”

Previous research by Rowntree and colleagues showed that when climate oscillations increase sea temperatures, southern right whales give birth to fewer calves because the warm water reduces the abundance of krill, which are small, shrimp-like crustaceans eaten by the whales.

The new study – scheduled for publication in the Feb. 15 issue of the journal Molecular Ecology – used genetic and chemical isotope evidence to show that mothers teach their calves where to go for food.

“Southern right whales consume enormous amounts of food and have to travel vast distances to find adequate amounts of small prey,” says study coauthor Jon Seger, professor of biology at the University of Utah. “This study shows that mothers teach their babies in the first year of life where to go to feed in the immensity of the ocean.”

The study tracked how whales are related by analyzing maternal DNA, and then compared that with dietary information obtained by characterizing different forms or isotopes of chemical elements in their skin. The two techniques – which the researchers say they used together for the first time – allowed the scientists to determine that whale mothers, their offspring and other extended family members eat in the same place.

“North Atlantic right whales feed in similar patterns and scientists have access to their feeding areas, but we don’t know where South Atlantic whales are feeding, so we had to use a combination of techniques to track this down,” says Luciano Valenzuela, a postdoctoral researcher in biology who led the study as part of his doctoral thesis at Utah.

The study’s other coauthor was Mariano Sironi, scientific director of the Instituto de Conservación de Ballenas (Institute for the Conservation of Whales) in Argentina.

Related Whales ‘Chow Down’ Together

For 38 years, Rowntree and colleagues have followed a group of southern right whales that migrate for three months each year to their calving area at Argentina’s Península Valdés, “which is as far south of the equator as we are north of the equator here in Salt Lake City,” says Rowntree, who also directs the right whale program at the Ocean Alliance’s Whale Conservation Institute.

Adult southern right whales are up to 50 feet long, and their calves are about 20 feet long and weigh a ton at birth.

The whales migrate to their calving grounds in winter, when they fast, and give birth in early spring. Three months later, they travel long distances in the South Atlantic to feed for the remainder of the year on krill and on other crustaceans named copepods. Rowntree calls it “a huge chow down.”

Whaling records from the 1800s and 1900s suggested southern right whales had six main feeding areas in the South Atlantic. However, scientists do not know where most of the whales feed now.

Rather than searching for right whale feeding grounds visually – an enormous if not impossible task given the lack of ship traffic in the vast South Atlantic – the scientists took a novel approach. During September and October of 2003 through 2006, Valenzuela collected small skin samples using a punch device that doesn’t harm the animals.

“The skin sample is a little bigger than the size of a pencil eraser,” Rowntree says.

From the skin samples, Valenzuela analyzed mitochondrial DNA, which is inherited only from the mother. The DNA revealed family relationships among whales. The researchers were able to distinguish individual whales by the patterns of whitish, callous-like material on their heads.

The skin samples also were analyzed for different forms or isotopes of carbon and nitrogen. The isotopes, which are present in food, are deposited in different tissues of the body after consumption. Food from any given location has a unique isotope “signature.” That made it possible to determine which whales fed in the same place without actually knowing where the feeding areas were.

Together, the DNA and isotope data revealed which whales were related and where each animal fed.

“The main result is that individuals from particular families have very specific isotope pattern showing that animals from specific lineages feed in the same area,” Valenzuela says.

Because the DNA was mitochondrial, which is passed only from mothers to offspring, the findings indicate mother whales teach their calves where to feed.

The study was funded by Ocean Alliance’s Whale Conservation Institute and the Canadian Whale Institute.