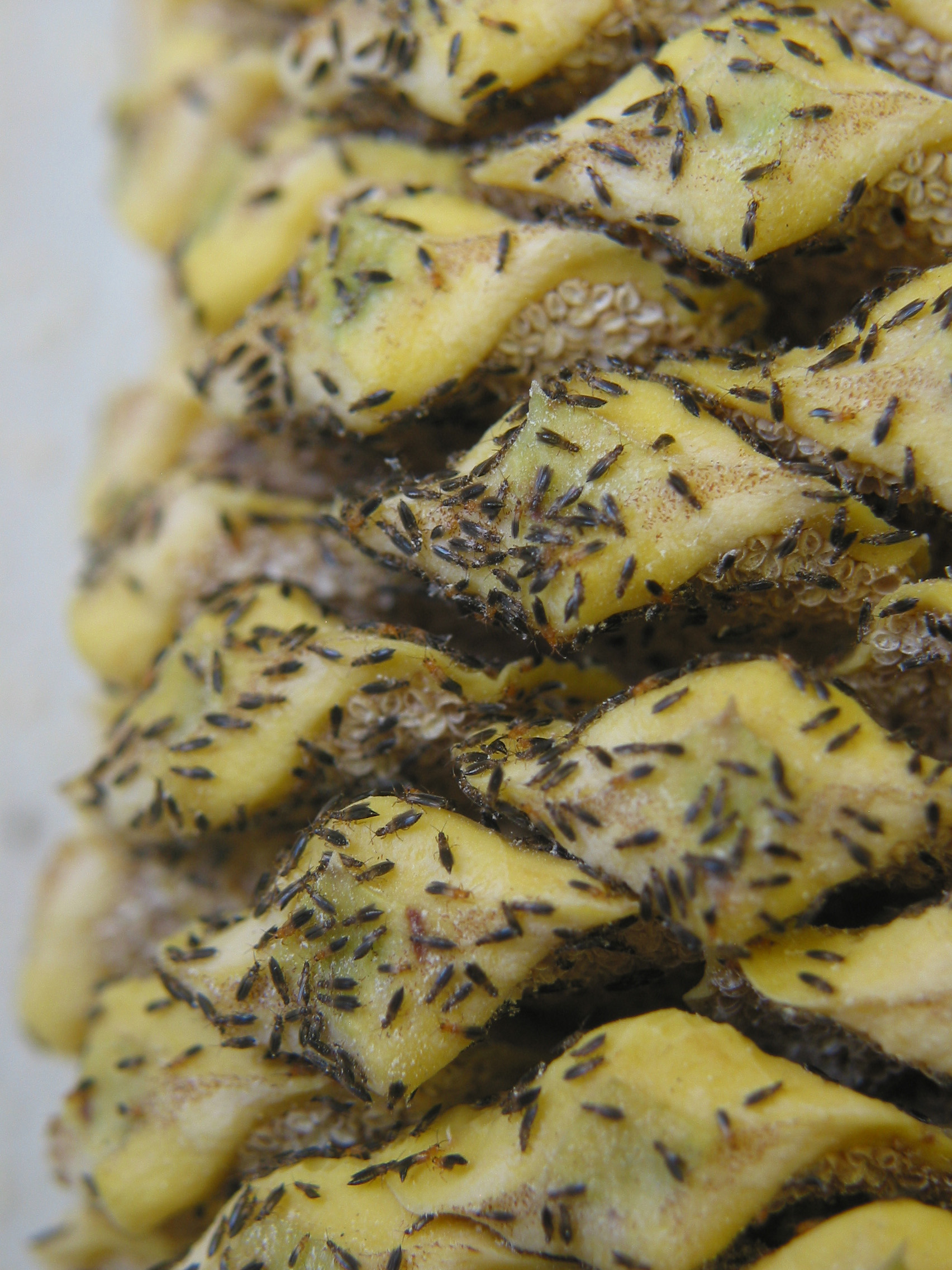 Oct. 4, 2007 – University of Utah scientists discovered a strange method of reproduction in primitive plants named cycads: The plants heat up and emit a toxic odor to drive pollen-covered insects out of male cycad cones, and then use a milder odor to draw the bugs into female cones so the plants are pollinated.

The unusual form of sexual reproduction used by some species of cycads – primeval plants known as “living fossils” – may represent an intermediate step in the evolution of plant pollination, the researchers report in the Friday, Oct. 5 issue of the journal Science.

“People think of plants as just sitting there and looking pretty and sending out some odors to attract pollinators, but these cycads have a specific sexual behavior tuned to repel, attract and deceive the thrips [small flying insects] that pollinate them,” says Irene Terry, research associate professor of biology at the University of Utah and principal author of the study.

The thrips enter male cycad cones to eat the pollen, and get covered by it in the process. The “push-pull pollination” method used by some cycads makes the adult thrips fly away, and then lures them back so that some pollen-laden thrips enter female cycad cones and pollinate them.

“They [cycads] are trading food for sex,” says study co-author Robert Roemer, who is Terry’s husband and a professor of mechanical engineering at the University of Utah. “Pollen is the only thing these thrips eat, so they totally rely on the plants. And the thrips are the only animals that pollinate the plants.”

As a mechanical engineer, Roemer studies heat transfer within the cycad cones.

Terry and Roemer conducted the study of tropical and subtropical cycads and thrips in Australia with three scientists from the University of Queensland: evolutionary biologist Gimme Walter, organic chemist Chris Moore and insect physiologist Craig Hull.

Sex and the Single Cycad

Unlike flowering plants, or angiosperms, cycads are gymnosperms – the group that also includes modern conifers such as pines and firs. Cycad plants are male or female. They look similar to palms or ferns, but are not related to either. Instead, cycads are a group of plants that the fossil record suggests have been around since the Permian Period roughly 290 million to 250 million years ago.

The cycad species in the study has most of its trunk underground. Leafy fronds stick up above ground and a single cone – male or female – grows in the middle of the fronds. The cone looks similar to a pine cone but is green at early stages, and then turns yellow. The scales of the cone normally are close together, but tiny spaces between the scales open slightly during the period when pollination occurs. The spaces provide a way for the insects to gain access to the pollen in male cones and the eggs in female cones.

It once was thought that pollination of cycads occurred randomly by wind blowing the pollen from male cones to nearby female cones. However, the eggs contained in the female cones of some species of cycads – including Macrozamia lucida, the species studied by Terry and colleagues – cannot be reached by wind-blown pollen because the cone scales are too tightly packed.

So there had to be another way for pollination to occur. In an earlier study, Terry showed that one species of thrips – Cycadothrips chadwicki – pollinates the Macrozamia lucida cycads.

In the new study, she discovered the hot, smelly details of how that happens.

An individual cycad plant has a pollination period – known as coning season – once a year to once every several years. That period lasts only four weeks or less. “Then they’re done and the cones disintegrate,” Terry says.

The cycad cones heat up by using the stockpile of sugars, starch and fats that normally would power everyday cell functions. Even when removed from the plant, cycad cones can go through daily heating cycles for as long as two weeks.

The increase in temperature is accompanied by a massive release of odors from the cones. One odor, a chemical named beta-myrcene, increases to toxic, lethal levels and drives the thrips out of male cones carrying small grains of pollen with them.

“These cycads heat up, and associated with that heating is a huge increase in volatile fragrances emitted by the cone,” Terry says. “It takes your breath away. It’s a harsh, overwhelming odor like nothing you ever smelled before.”

“Think of a guy with too much after shave,” Roemer says.

Beta-myrcene at low levels is attractive to thrips. So as the cycad plants cool down, the same odor that chases them out of the cones dissipates to the point that it – along with other odors – attracts the thrips back into the cones. Some pollen-covered thrips, seeking more pollen to eat, inadvertently are lured into female cycad cones and pollinate them.

“It’s totally unusual, like being in a room with one gardenia versus lots of them,” says Terry. “The female cones never have as strong an odor as the male cones, but they still attract a few of the flying thrips – enough to get pollinated.”

Roemer says the cycad females “attract the thrips because they fool the thrips into thinking they are males.”

The whole cycle starts again the next day “until the males wear out and the females are happily pollinated,” Terry says.

Plants are thought to have evolved chemical defenses to drive away creatures that would eat them. Modern flowering plants use fragrances and/or bright colors to attract insects to pollinate them.

“It is thought that early on, these odors were used as a defensive mechanism to repel plant eaters, and that some early pollination systems evolved with insects that used the odors to find the plant,” Terry says.

This news release and high-resolution photos can be downloaded from: