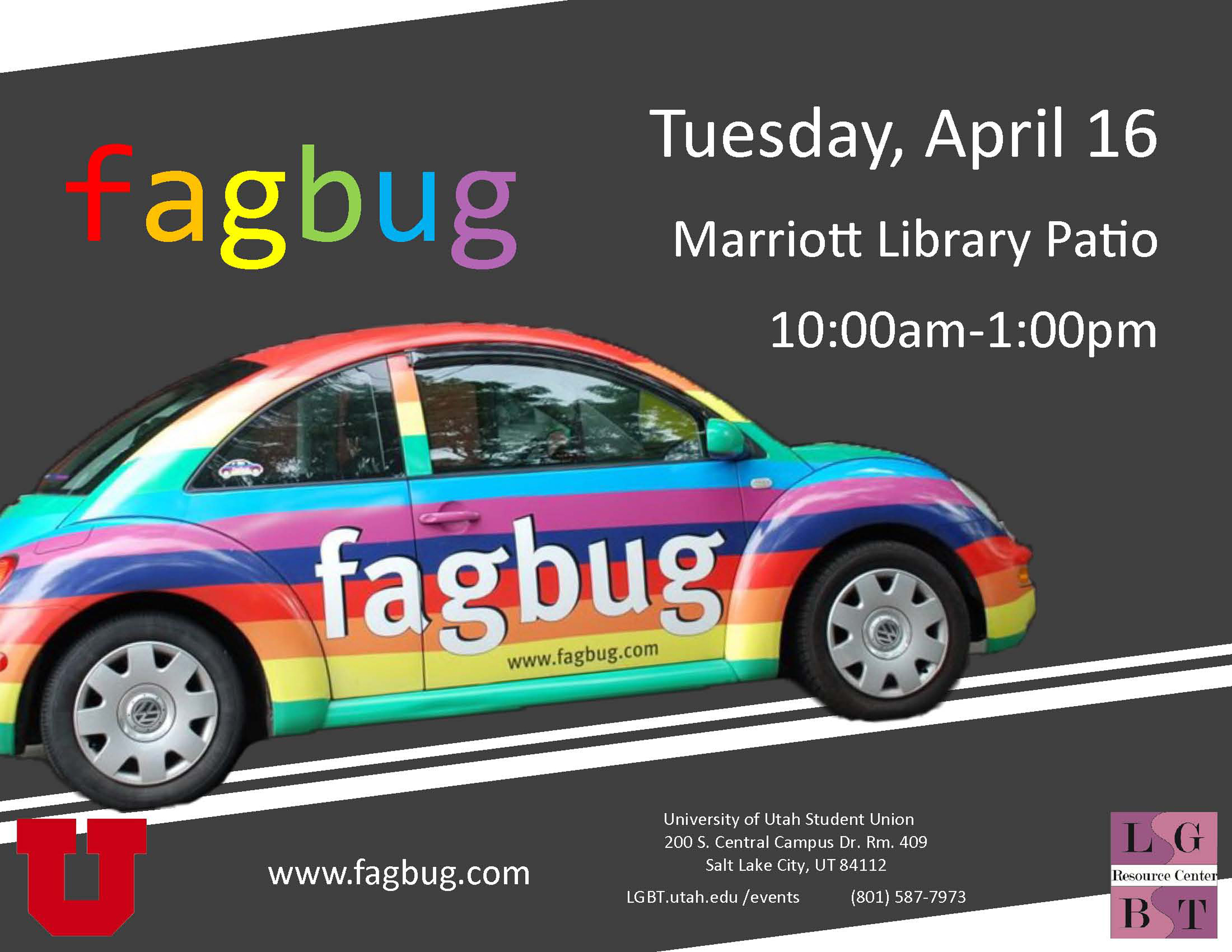 April 10, 2013 – The theme for this year’s Ally Awareness Week at the University of Utah (the U) will be “Stand. Speak. Act.” Organized annually by the LGBT Resource Center, activities will take place Monday, April 15 through Friday, April 19. Derived from the word ally – someone who advocates for and supports members of a community other than their own – the celebration honors those who reach across their differences to achieve mutual respect and inclusion. This year’s list of events will be highlighted by a screening of the documentary “Fagbug,” followed by a discussion with creator Erin Davies on Tuesday, April 16 from 10:00 a.m. to 1:00 p.m. at the J. Willard Marriott Library Plaza.

Erin Davies was victim to a hate crime due to sporting a rainbow sticker on her VW Beetle. Erin’s car was vandalized and left with the words “fag” and “u r gay” embroiled on the driver’s side window and hood of her car. Despite initial shock and embarrassment, Erin decided to embrace what happened by leaving the graffiti on her car. She drove her car, now known worldwide as the “fagbug” on a 58-day trip around the United States and Canada. Along the way, Erin discovered more serious hate crimes, had people attempt to remove the graffiti and experimented with having a man drive her car. The Beetle will be on display on the East Marriott Library Plaza from 10:00 a.m. to 1:00 p.m. on April 16.

“The University of Utah is honored to have Erin as a keynote for this year’s Ally Week,” says Enrique Alemán, Jr., assistant vice president for the Office for Student Equity and Diversity at the U. “On behalf of the University of Utah I would like to express our excitement over the week’s events and invite students, faculty and staff to come celebrate the contributions and spread awareness of issues that impact the LGBTQ community at the U and in Utah.”

“Ally Week at the University of Utah coincides with the National Day of Silence on April 19,” states Kai Medina-Martinez, director at the LGBT Resource Center at the U. “This week is a time to recognize the silence LGBTQ people are forced to remain in in order to be safe, and the important work LGBTQ allies do to bring awareness to the inequities and discrimination they face daily. It’s a week of awareness, community building and celebration.”

About the LGBT Resource Center