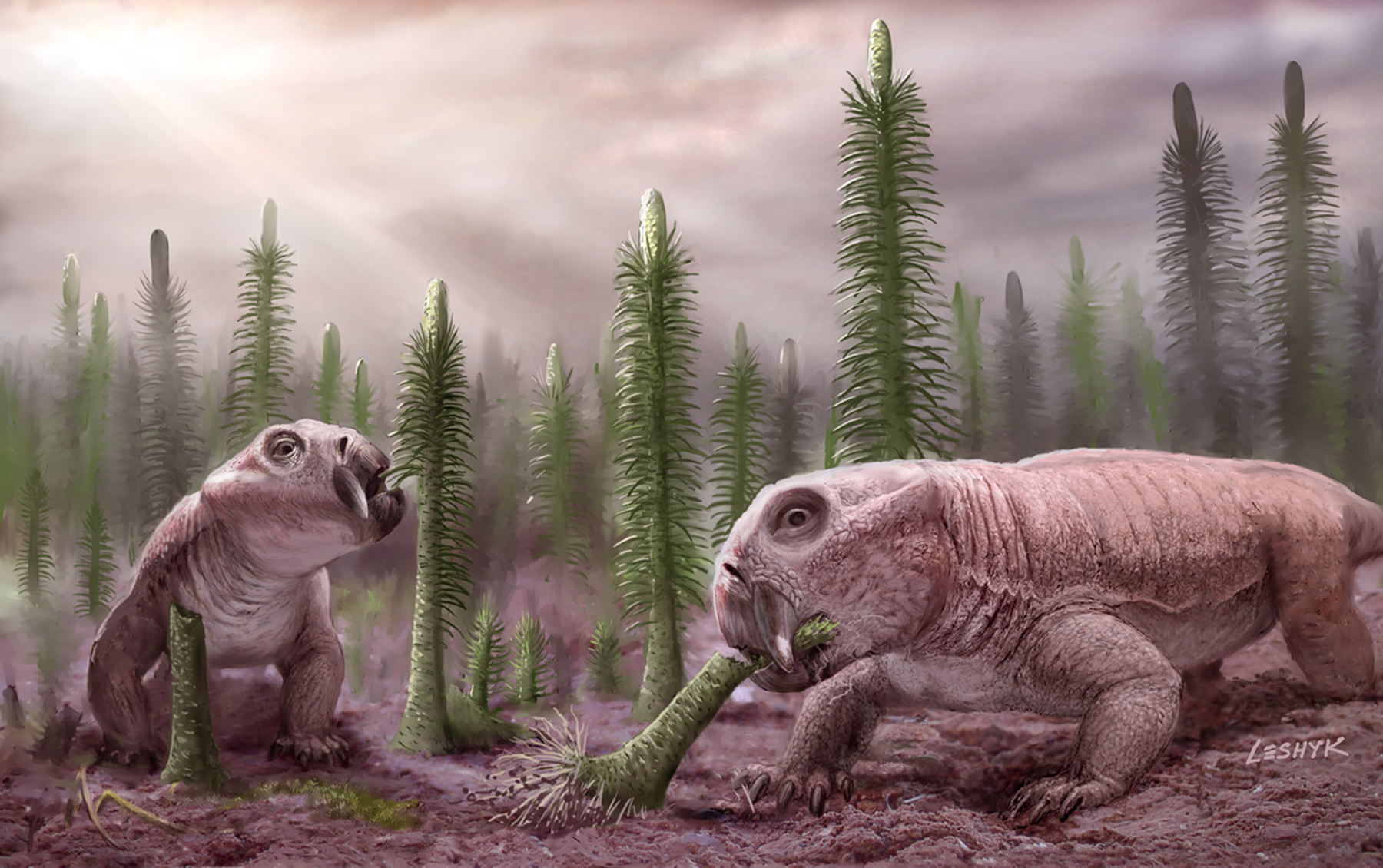 October 26, 2011 — Natural History Museum of Utah’s Paleontology Curator Randall Irmis, along with a researcher at Brown University, have evidence that mass extinction that ended the Permian Period was disastrous for land-based animals. In a specimen-by-specimen analysis, the scientists say species were reduced to a handful of forms, called disaster taxa. The low diversity of vertebrates meant that terrestrial ecosystems endured boom-and-bust cycles for up to 8 million years before finally stabilizing. Results appear in the journal Proceedings of the Royal Society B. Irmis is also an assistant professor of geology and geophysics at the University of Utah.

The cataclysmic events that marked the end of the Permian Period some 252 million years ago were a watershed moment in the history of life on Earth. As much as 90 percent of ocean organisms were extinguished, ushering in a new order of marine species, some of which we still see today. But while land dwellers certainly sustained major losses, the extent of extinction and the reshuffling afterward were less clear.

In a paper published in the journal Proceedings of the Royal Society B, Irmis and his co-author Jessica Whiteside from Brown University undertook an exhaustive specimen-by-specimen analysis to confirm that land-based vertebrates suffered catastrophic losses as the Permian drew to a close. From the ashes, the survivors, a handful of genera labeled “disaster taxa,” were free to roam more or less unimpeded, with few competitors in their respective ecological niches. This lack of competition, the researchers write, caused vicious boom-and-bust cycles in the ecosystems, as external forces wreaked magnified havoc on the tenuous links in the food web. As a result, the scientists conclude from the fossil record that terrestrial ecosystems took up to 8 million years to rebound fully from the mass extinction through incremental evolution and speciation.

Other studies have looked at species richness, “but we’re the first to look at species evenness and abundance,” said Irmis.  “The boom-and-bust cycles that marked land-based ecosystems’ erratic rebound were like “mini-extinction events and recoveries.”

“It means the (terrestrial ecosystems) were more subject to greater risk of collapse because there were fewer links” in the food web, said Jessica Whiteside, assistant professor of geological sciences at Brown University.

The hypothesis, in essence, places ecosystems’ recovery post-Permian squarely on the repopulation and diversification of species, rather than on an outside event, such as a smoothing out of climate. The analysis mirrors the conclusions reached by Whiteside in a paper published last year in Geology, in which she and a colleague argued that it took up to 10 million years after the end-Permian mass extinction for enough species to repopulate the ocean — restoring the food web — for the marine ecosystem to stabilize. “It really is the same pattern” with land-based ecosystems as marine environments, Whiteside said. The same seems to hold true for plants, she added.

Some studies have argued that continued volcanism following the end-Permian extinction kept ecosystems’ recovery at bay, but Irmis and Whiteside say there’s no physical evidence of such activity.

The researchers examined nearly 8,600 specimens, from near the end of the Permian to the middle Triassic, roughly 260 million to 242 million years ago. The fossils came from sites in the southern Ural Mountains of Russia and from the Karoo Basin in South Africa. The specimen count and analysis indicated that approximately 78 percent of land-based vertebrate genera perished in the end-Permian mass extinction. Out of the rubble emerged just a few species, the disaster taxa. One of these was Lystrosaurus, a dicynodont synapsid (related to mammals) about the size of a German shepherd. This creature barely registered during the Permian but dominated the ecosystem following the end-Permian extinction, the fossil record showed. Why Lystrosaurus survived the cataclysm when most others did not is a mystery, perhaps a combination of luck and not being picky about what it ate or where it lived. Similarly, a reptilian taxon, procolophonids, were mostly absent leading to the end-Permian extinction, yet exploded onto the scene afterward.

“Comparison with previous food-web modeling studies suggests this low diversity and prevalence of just a few taxa meant that links in the food web were few, causing instability in the ecosystem and making it susceptible to boom-bust cycles and further extinction,” Irmis said.

The ecosystems that emerged from the extinction had such low animal diversity that it was especially vulnerable to crashes spawned by environmental and other changes, the authors write. Only after species richness and evenness had been re-established, restoring enough population numbers and redundancy to the food web, did the terrestrial ecosystem fully recover. At that point, the carbon cycle, a broad indicator of life and death as well as the effect of outside influences, stabilized, the researchers note, using data from previous studies of carbon isotopes spanning the Permian and Triassic periods.

“These results are consistent with the idea that the fluctuating carbon cycle reflects the unstable ecosystems in the aftermath of the extinction event,” Whiteside said.