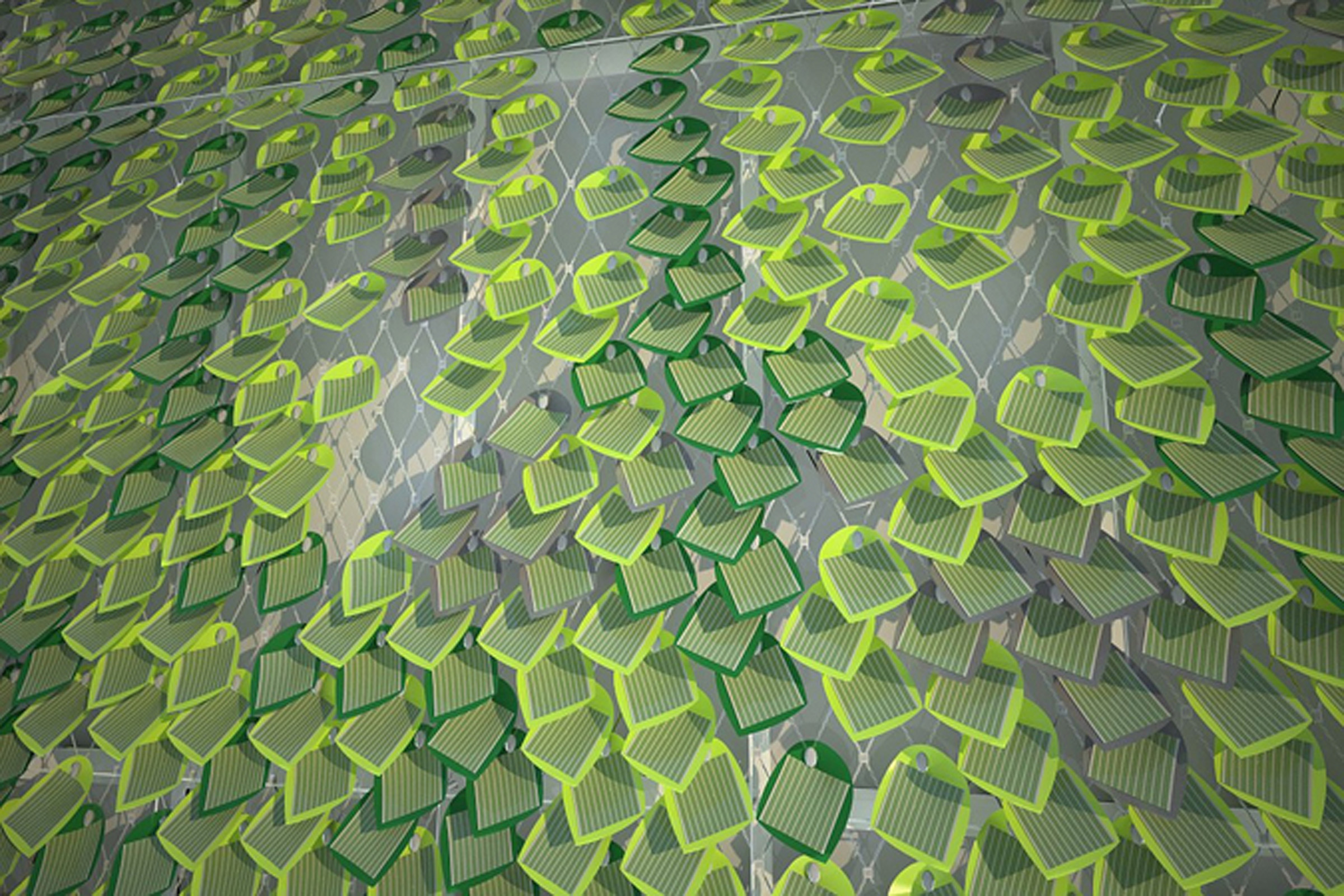 July 7, 2011 – Solar-generated electricity is taking a new form – that of solar panels shaped like artistically fashioned ivy leaves decorating a wall’s surface. The first location in the United States to apply this colorful array is the University of Utah (the U) in Salt Lake City.  This new product called Solar Ivy was developed by Sustainably Minded Interactive Technology (SMIT), a company in New York.

The idea to have SMIT install Solar Ivy on the U’s campus and most of the cash for the project comes from the U’s student-led Sustainable Campus Initiative Fund (SCIF), which is funded by student contributions. Each year, students compete for grants to finance projects that have a positive environmental impact and help educate the campus community about developing earth-conscious habits.

Bringing Solar Ivy to the U was spearheaded by Tom Melburn, an environmental studies major.  His project was awarded a grant for roughly two-thirds of the $42,000 cost of the project. The remaining third will be raised from the campus community in a drive being announced today to generate funds and awareness of the many ‘green’ efforts taking place all over campus.

“Students are becoming so engaged in creating a sustainable campus that we could only partially fund all the projects submitted this year,” says Whitney Williams, SCIF coordinator.  “So, we’re turning to others in our community to partner on this one. By buying a leaf on the array, donors will make possible not only a novel energy-saving device, but also a highly visible reminder on campus to conserve electricity.”

Donations to the project can be made online at http://tiny.utah.edu/solarU

Solar Ivy is a composition of small photovoltaic panels shaped so that they can be installed in an attractive arrangement, much like ivy growing over a building’s surface.  The panels generate electricity that is used by the building, offsetting the amount of power the building buys from the utility company. Panels can be shaped and colored to suit the installation.

“We’re considering Orson Spencer Hall for the array because of its solar exposure and its visibility,” says Melburn, who is coordinating the project with campus facilities managers.  “The south-facing brick façade receives high levels of unobstructed sun all year. Its location at the center of campus means high levels of traffic.”   SCIF and Project Manager Archie Phillips also are considering the south façade of the Olpin Student Union building, which also receives significant solar exposure.  The decision as to which building to use will be decided during the design phase of the project over the coming weeks.

The installation of the prefabricated panels is expected to begin late this fall and projected to take a few weeks to complete.

SCIF is a student-led enterprise directed by the Office of Sustainability.  The fund provides financial support for real-world projects that improve the University of Utah’s environmental quality and make the campus more sustainable. SCIF allocated $171,000 to 14 projects for the 2011 school year.  For more information, explore the SCIF website at www.sustainability.utah.edu/SCIF.

Solar Ivy (www.solarivy.com) is a product of the Brooklyn, N.Y. firm SMIT that has been challenging accepted notions about solar power collection throughout the world.