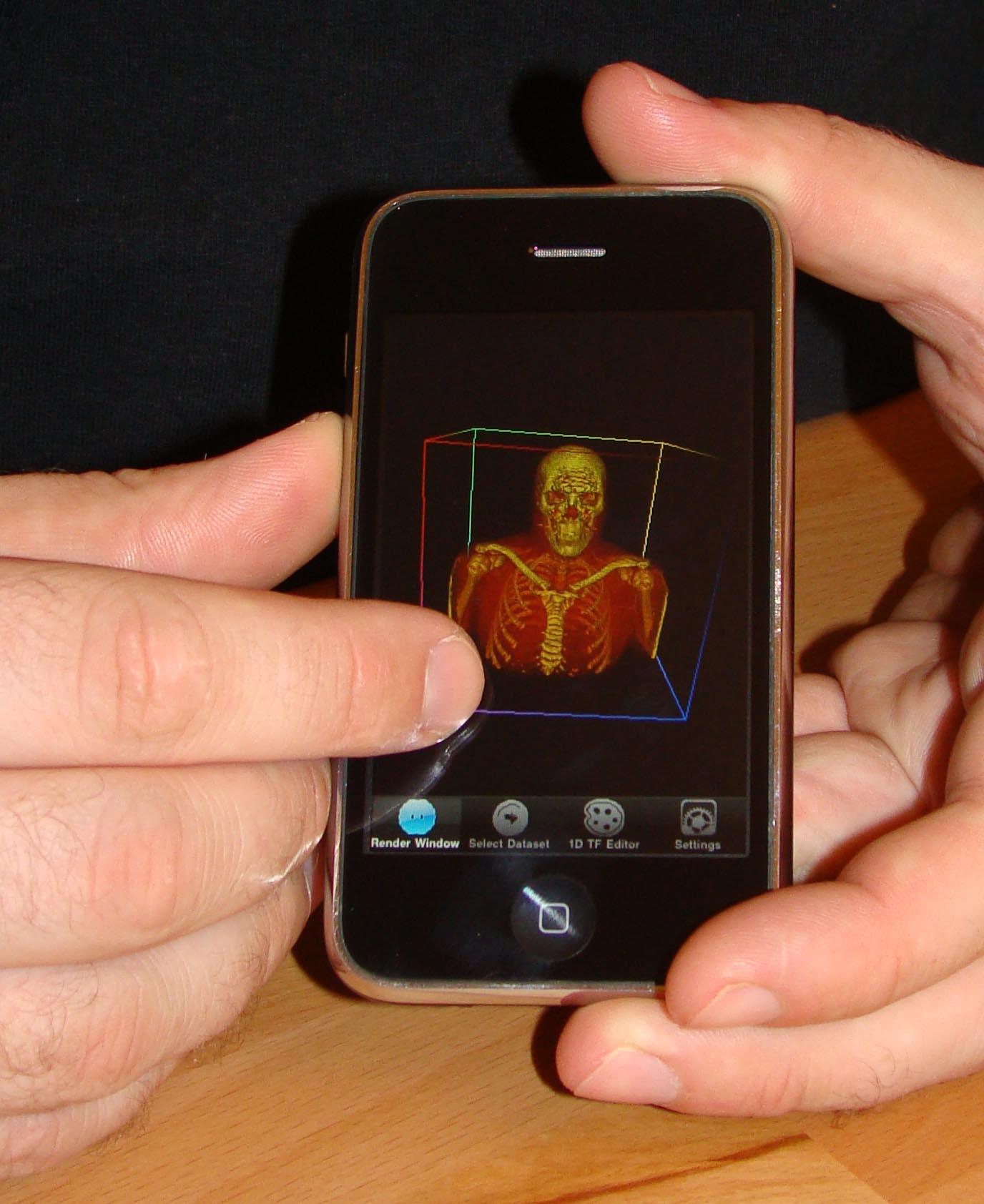 Another iPhone app from the SCI Institute is in development. Named ViSUS, it now allows users of desktop and laptop computers – and soon iPhones – to quickly and easily analyze and edit massive image files containing hundreds of gigabytes of data.

Nielsen says AnatomyLab is meant for students and teachers, but “a lot of medical professionals are buying it because they can show it to their patients on the spot and clarify injuries or problems they are discussing with them about their body.”

Johnson says doctors can use ImageVis3D Mobile the same way, but with images from patients’ own CT or MRI scans.

“We assume the doctor already has looked at and analyzed the image data on a larger display device,” Johnson says. “Now he goes back to the patient and can display that visualization interactively on a mobile device like the iPhone without having to go back to a computer screen somewhere else.”

ImageVis3D Mobile is based on similar software for desktop and laptop computers. It performs “3-D volume visualization” or “volume rendering,” which means “it makes realistic 3-D pictures from medical image data and other scientific and engineering data,” Johnson says.

The ability for the public to do 3-D visualization of large data sets is a fairly recent development, he adds. “It was not very long ago you could only do this on high-end graphics workstations,” says Johnson. “We created the software that enabled 3-D visualizations to be done on laptops and desktops – and now even on the iPhone.”

ImageVis3D Mobile became available via Apple’s iPhone App Store in mid-September. More than 500 copies were downloaded in the first 11 days.

The original ImageVis3D was written by Jens Krueger, a German computer scientist and adjunct faculty member at the SCI Institute, and Tom Fogal, a software developer at the institute, as part of a biomedical computing project funded by the National Institutes of Health. The iPhone version then was developed by Krueger, who now is at the German Institute for Artificial Intelligence.

Fogal says the iPhone app was developed “to reach a wider audience. There may be a lot of people who are not computer savvy but love their iPhone, so getting it into the App Store allows it to be seen by a much larger market.”

AnatomyLab had its roots when Nielsen, who has worked at the university 24 years, coauthored an anatomy textbook. Nielsen and Shawn Miller, a University of Utah Ph.D. student in anthropology, then designed software on DVD named “Real Anatomy” to accompany the text. “It allows you to dissect a cadaver on a computer,” Nielsen says.

That software was based on 40 levels of dissection of a cadaver, starting with skin and proceeding through subcutaneous tissue, nerves, veins, muscles and so on. Nielsen and Miller did the dissection and all the photography.

The publisher of the text and DVD wasn’t interested in an iPhone app, but gave Nielsen permission. So Nielsen asked his son, Scott Nielsen, a physics major at the University of Utah, to write the iPhone code.

“He’s a bright guy, and I said, ‘Hey Scott, have you ever programmed for the iPhone?’ He hadn’t, but within a month he wrote the Anatomy Lab program.”

Since AnatomyLab went on sale in July, about 3,300 copies have been sold.

“It’s aimed at students who want to learn anatomy,” Nielsen says. “There’s no substitute for real dissection, but a lot of students in the undergraduate world don’t have access to cadavers in anatomy lab. So we tried to provide them with a realistic lab setting on their phone.”

MyBody – which Nielsen calls “a watered-down version of AnatomyLab for the general public” – went on sale in August.

Massive Images in the Palm of Your Hand

Meanwhile, the SCI Institute is proceeding with development of an iPhone version of ViSUS. The existing version for work stations, desktops and laptops is designed for easy, quick editing of large-scale photographs such as satellite images and mosaics made of scores to hundreds of smaller photos.

The iPhone app can be used by scientists, doctors, engineers or “anybody who needs to manipulate or view lots of high-resolution images, whether photographs, medical images like CT scans or geographic images like you would find in Google Earth satellite images,” says Johnson.

“We are able to view pieces of that interactively on the iPhone,” either looking at the entire image (at lower resolution) or zooming in and looking at parts of the image in high resolution – at a faster speed and with less processing than software such as Google Earth, Johnson says.

The images can be displayed, manipulated and analyzed on a PC or laptop – and soon on an iPhone – even though the image data remain on a server.

“That’s the cool thing,” says Johnson. “You can have the data sitting elsewhere, yet you can still view it, display it and manipulate it on your iPhone,” even though “the data set size can be much, much larger than the memory on the iPhone.”

The original ViSUS software was developed by Valerio Pascucci – a SCI Institute faculty member and associate professor of computer science at the University of Utah – with funding from the U.S. Department of Energy.

The Apple App Store is at http://www.apple.com/iphone/iphone-3gs/app-store.html but iTunes software must be downloaded first to access the store.