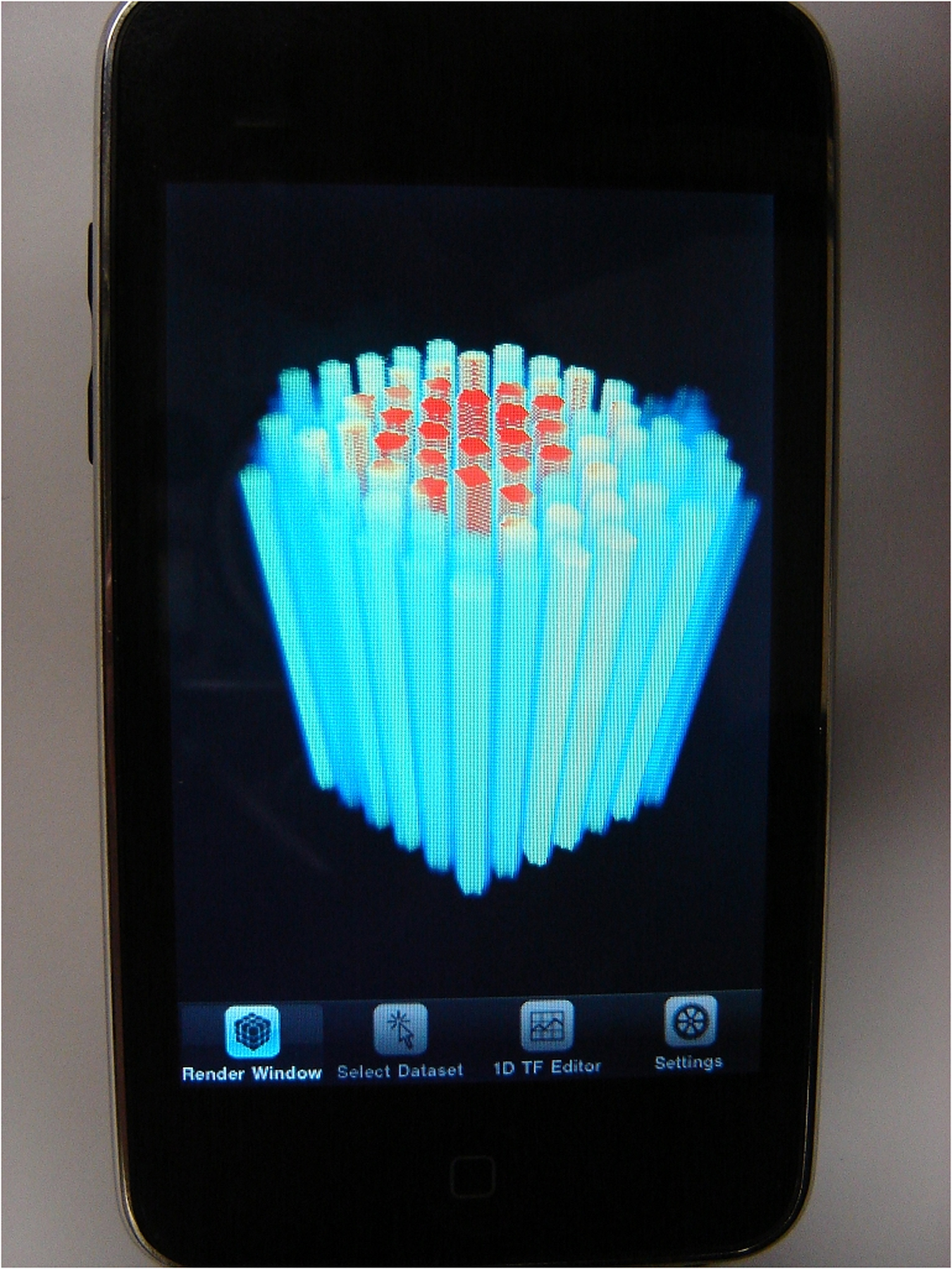 An iPhone “application” or software developed by the University of Utah’s Scientific Computing and Imaging (SCI) Institute to look at medical CT or MRI scans now is being used by the university’s nuclear engineering program to display simulations of a nuclear reactor’s core on an iPod, iPhone or iPad.

Not only is the iPhone reactor simulation “a phenomenal teaching tool,” but it allows researchers “to look at existing nuclear power plants and predict the performance if we want to increase the power or prolong their life,” says Tatjana Jevremovic, director of the Utah Nuclear Engineering Program at the University of Utah.

In addition, “with these modern and more detailed simulation tools, we can design new types of nuclear power plants in a faster fashion than 15 or 20 years ago,” adds Jevremovic, a professor of nuclear, chemical and civil engineering.

But you cannot do this at home. While the visualization software – an iPhone app named ImageVis3D Mobile – is online free of charge at the Apple App Store, the reactor simulation software and data are not commercially available.

Jevremovic, Shanjie Xiao, a postdoctoral fellow in nuclear engineering, and Xue Yang, a graduate student in nuclear engineering, designed an interface so ImageVis3D Mobile can be used to display the results of reactor simulation software named AGENT (Arbitrary Geometry Neutron Transport) on an iPhone, iPod, iPad and other computers.

Not only can researchers simulate the University of Utah’s small research reactor, “we can simulate any reactor with the simulation software package that we developed,” Xiao says. “We obtain information about the reactor core, such as the level of power being produced. We also can understand the distribution of reaction rates across the core, which gives us information about fuel use at any instant in time.”

Building a Future for Nuclear Engineering

Jevremovic, a native of Belgrade, Serbia, has worked in Japan and at Indiana’s Purdue University before joining the University of Utah faculty in August 2009 to revitalize its nuclear engineering education and research program.

The university’s TRIGA reactor – Training, Research, Isotopes and General Atomics – is among 13 of its type still operating at universities in the United States, Jevremovic says. It runs on a mixture of uranium-235 and uranium-238 fuel.

With concern over climate change due to emissions of carbon dioxide from the burning of coal, oil and other fossil fuels, “there is now an overall renaissance in nuclear engineering, not just in the United States but in the world,” despite the 1986 meltdown at the Soviet Union’s Chernobyl nuclear power plant, Jevremovic says.

“We certainly have to consider the environment for our children,” she adds. “The future is nuclear energy for many reasons. It’s safe and proven technology. We have more than 40 years experience in operating nuclear power plants.”

Jevremovic says reactor core simulations provide details about performance within a reactor, where the most intense fission reactions should be in the middle.

“We simulate everything now on a computer,” Jevremovic says. “Computer technology has developed rapidly, and we can do calculations and simulations we could just dream of five years ago.”

The iPhone app “can visualize a vast amount of data you create by using the software simulation packages,” she says. “Humans react much better to what they see than just looking at some numbers.”

Jevremovic says she plans to develop a secure way for nuclear engineers in academic settings to share simulation data with those at commercial power plants – something that “will speed up communication and the transfer of information in a very modern and advanced way.”

ImageVis3D Mobile, which became available last September, is based on similar software for desktops and laptops. It does “3-D volume visualization” or “volume rendering” to make realistic 3-D pictures from medical, scientific and engineering data.

ImageVis3D Mobile was developed so iPhone, iPod and iPad users can display, rotate and otherwise manipulate a wide range of 3-D scientific images. A few years ago, such visualizations could be displayed only on advanced graphics workstations.

The original ImageVis3D was written by Jens Krueger, a German computer scientist and adjunct faculty member at the University of Utah’s SCI Institute, and Tom Fogal, a software developer at the institute, as part of a biomedical computing project funded by the National Institutes of Health. The iPhone version then was developed by Krueger, who now is at the German Institute for Artificial Intelligence.

ImageVis3D Mobile is available from the Apple App Store at:

but iTunes software must be downloaded first to access the store.

This news release and photos of the reactor simulation on an iPhone are available at: