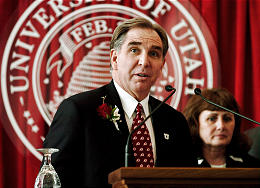 March 22, 2005 — A panoply of University of Utah events will take place the week prior and leading up to the inauguration of Michael K. Young as the University’s 14th president on Friday, April 15th, at 11 a.m., in Kingsbury Hall, located at 1395 E. Presidents Circle (180 S.) on the University of Utah campus. The event is free and open to the public on a first come, first served basis. A processional ticket is required for those participating in the academic procession, which will commence at the Park Building, at 10:45 a.m., and travel to Kingsbury Hall. Following the ceremony a reception will be held, weather permitting, on the Kingsbury Hall Plaza. In case of inclement weather, the reception will be held in the Gardner Hall atrium.

John Francis, associate vice president for academic affairs and undergraduate studies, notes, “The inauguration of a new president is not only a time of celebration, but it is also a time that we, as a university community, reaffirm our commitment to our educational mission. It is also a time for the new president to present his vision for our university’s future.”

Celebration activities surrounding the inauguration of Young will include two art exhibits, a cultural performance, an ice cream social for students and eight symposia, including a lecture by former Secretary of State James A. Baker III. The campus and greater community is invited to participate in these activities. Free tickets are required for the cultural performance, April 14, at 7:30 p.m., in Kingsbury Hall. Tickets may be obtained at the Kingsbury Hall ticket office, 1395 E. Presidents Circle. For more information on the event, call 801-581-7100.

President Michael K. Young began his tenure as president of the University of Utah on Aug. 1, 2004. Prior to his appointment by the Utah State Board of Regents, he was dean and Lobingier Professor of Comparative Law and Jurisprudence at the George Washington University Law School, from 1998 to 2004. From 1978 to 1998, he was the Fuyo Professor of Japanese Law and Legal Institutions and director of the Center for Japanese Legal Studies at Columbia University’s School of Law. During President George Bush’s administration, Young served as ambassador for Trade and Environmental Affairs (1992-93); deputy undersecretary for Economic and Agricultural Affairs (1991-93); and deputy legal adviser to the U.S. Department of State (1989-91). During the October 1977 term, he also served as a law clerk to the Honorable William H. Rehnquist, then Associate, now Chief Justice of the United States Supreme Court. Young is a graduate of Brigham Young University (B.A., 1973) and Harvard Law School (J.D., 1976). He and his wife, the former Suzan Stewart, a registered nurse, have been married for 32 years and have three children.

Inauguration programming, which follows, can also be found at http://www.inauguration.utah.edu/.

· April 11, 2-3 p.m.
“U.S. Policy in the Middle East: Where Do We Go From Here?”
Former Secretary of State James A. Baker III
Kingsbury Hall

INAUGURATION ARTS PERFORMANCE
Featuring ballet and modern dance performances by students, alumni, Ririe-Woodbury and Ballet West as well as music by the Utah Philharmonia, Utah Concert Chorale, University Singers and Lyric Opera Ensemble. A light reception, following the performance, will be held on the Balcony and Lower Lobby levels of Kingsbury Hall.

Free tickets are required and may be obtained by visiting the Kingsbury Hall ticket office, 1395 E. Presidents Circle. For more information, call 801-581-7100.