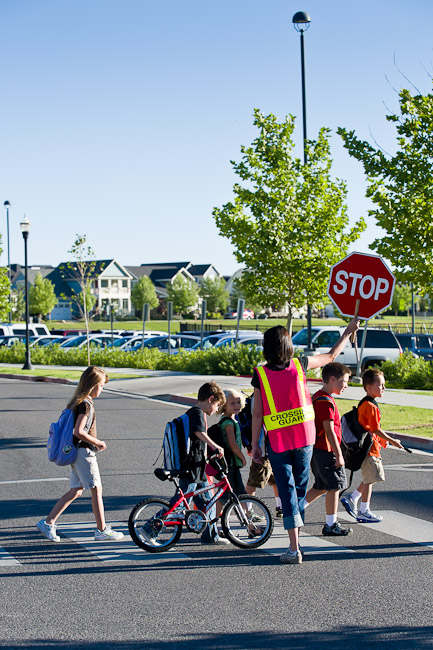 An individual’s decision to walk to school is actually quite complex. It is influenced-perhaps-by distance and an attractive walkable environment, but also by intertwined social, psychological and environmental perceptions that sometimes differ between parent and child.

Because walking has important health consequences, researchers at the University of Utah set out to learn how the interplay of factors can help reclaim the walk to school and promote a healthy physical and environmental lifestyle.

“In the last 50 years, the prevalence of youth obesity nationwide has tripled,” says Melissa Napier, the study’s lead author. “Coincidentally, the number of kids walking to school declined 68 percent from 1969 to 2001. We wanted to explore the confluence of psychology and design that keeps kids from engaging in an easy, social and healthy form of physical activity.”

What they learned from the study, to be published this fall in the Journal of Environmental Psychology, is that walkable design results in a vastly higher number of walks by students living in a master-planned community in South Jordan, Utah that was designed to be walkable, than in a community with a peripherally-sited school, a street system of cul-de-sacs and larger lots.

In the planned community, 88 percent of students reported walking to school in a week, compared to 17 percent in a similar, less walkable neighborhood.

In addition, the study shows other factors also influence the decision to walk or ride, which led researchers to conclude that understanding perceptions can be as important as designing walkable communities.

Researchers found that parents living in the less walkable community agreed that more barriers to walking existed than their own children did. These barriers included perceptions of unsafe traffic, street crossing danger and crime.

“Parents’ perceptions are key because it is they who decide how to get their kids to school,” says Napier. “Changing their perceptions-by mapping out walking routes, adding crosswalks and walking school buses for example-can go a long way in creating a supportive walking environment in any community.”

“Further, get children actively involved in making changes to their satisfaction. Children who perceive fewer barriers to walking-regardless of what their parents think-were more likely to walk to school in my study. Both children and parents have to agree that the environment supports walking in order to maximize the number of children who will walk to school,” Napier continues.

Researchers polled 193 fifth-graders in two schools in South Jordan, Utah. The study was designed to compare Daybreak, a neighborhood designed along “new urbanist” principles, with a standard suburban school. Daybreak’s design places the school in the heart of the community with well-connected streets, walking paths, sidewalks on both sides, small lots and multiple front porches, all of which have been shown to support greater pedestrian activity.

“This is an early indicator of success of the design goals at Daybreak,” says Stephen James, manager of planning and community design for Daybreak’s developer, Kennecott Land. “Daybreak villages are scaled to the human pace and provide a diverse set of every day destinations such as parks, schools, churches, shops, offices and community centers. The routes must be safe and direct, conveniently connecting everything via paths, trails and sidewalks that are buffered from traffic and shaded from the hot summer sun. At Daybreak the car is not central to experiencing life. It is just one of the many ways to get around,” James concludes.

The students in the study were divided into three groups. Students in the “walkable community” group lived within Daybreak and within a mile of school. The “mixed community” group attended the same school, but lived in an area with larger lots and cul-de-sacs. Three-quarters of the students still lived within a mile of school. The third, “less walkable community” group attended a different school in a nearby area. That school is on a busy street with a single sidewalk. The area, a more typical suburb, has houses on larger lots, many circuitous cul-de-sacs, and fewer walkable features. Over two-thirds of students lived farther than a mile from school.

The study was conducted by Melissa Napier for her master’s degree in the Department of Family and Consumer Studies at the University of Utah with funding from a University of Utah Synergy seed grant for interdisciplinary urban systems research.