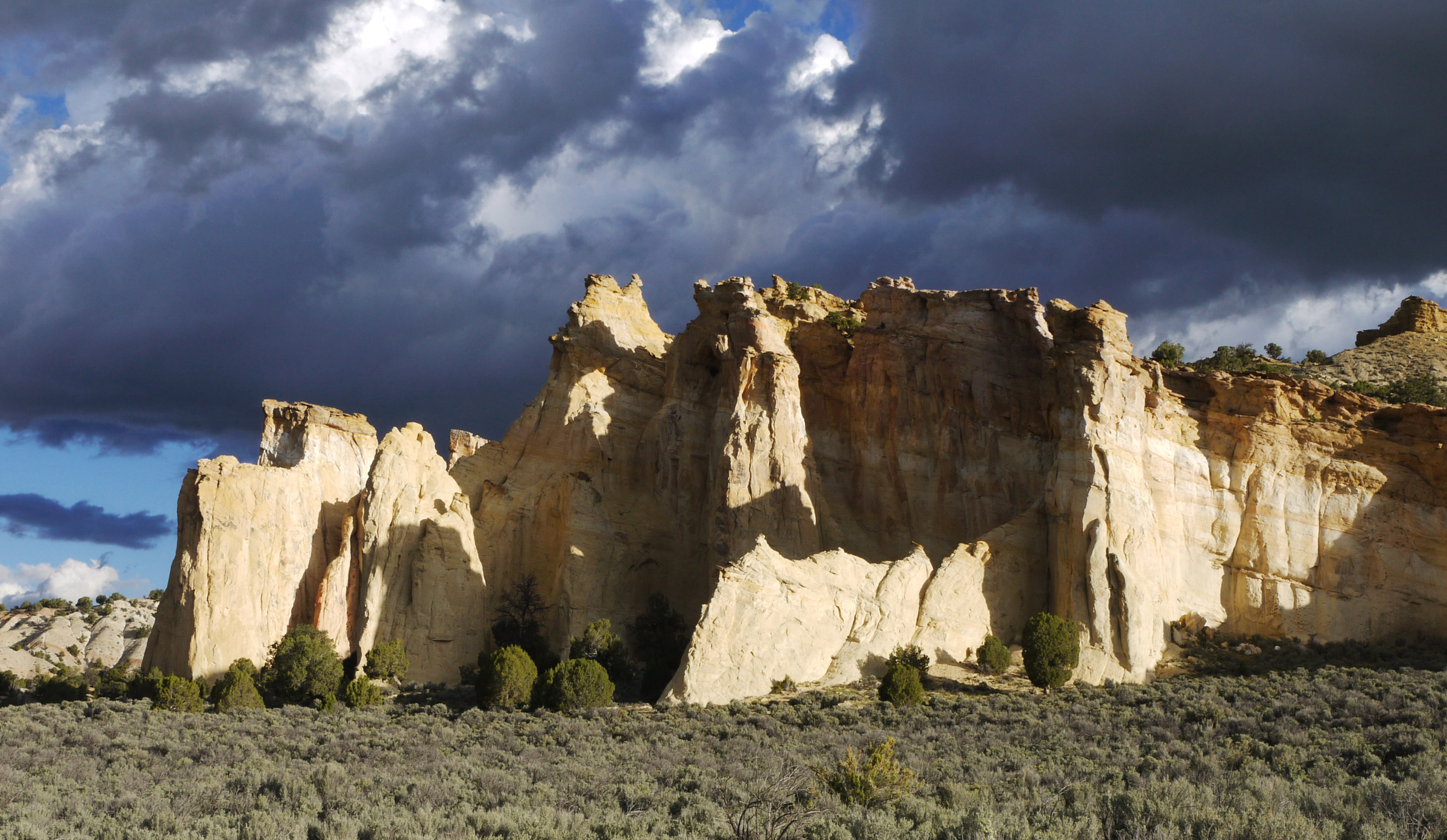 April 15, 2014 – Standing on a desert ridgeline in southern Utah with little vegetation visible for miles, one would be challenged to imagine the area under your feet as swampland.

More surprising yet – even for the researchers intimate with the region – is that most of the fossil animal and plant species discovered in the area known as Grand Staircase-Escalante National Monument are unique; not found anywhere else in North America.

It is not a new idea that Utah was once on the shore of warm, inland sea, part of an isolated island-continent known as Laramidia. But the dinosaurs and other animals and plants being found there – dating back 75 to 80 million years – have confirmed a new idea; that this lost ecosystem is distinct from those found farther north in rocks of the same age.

That is the topic for “Dino Hunters” – a feature article in the current issue of National Geographic Magazine.

The story traces the footsteps of paleontologists on the hunt for fossils in this remote part of southern Utah who were aided for the first time by helicopter support made possible by a grant from the National Geographic Committee for Research & Exploration. Researchers from the Natural History Museum of Utah, Denver Museum of Nature & Science, and the U.S. Bureau of Land Management have been working in the Monument for almost fifteen years, but have never before been able to access such remote parts of the Monument, where it is possible no other paleontologists have yet been able to reach, let alone with the equipment required to excavate their discoveries.

“For more than 14 years, the museum has been at work in Grand Staircase,” says Randy Irmis, curator of paleontology at the Natural History Museum of Utah and assistant professor at the University of Utah. “The discoveries there – nine new named dinosaur species and counting – have revealed a whole new ecosystem that existed 75 to 80 million years ago and tell a different story about the end of the age of dinosaurs in Utah.”

Rather than geographic or other physical barriers between regions, it is thought that the distinct northern and southern faunas evolved in response to repeated changes in sea level and latitudinally differentiated climate zones. Simply put: different climate conditions may have supported different plant ecosystems that in turn sustained different kinds of animal life.

Luckily for 21st century fossil enthusiasts without ready access to the now high-and-dry swamps of southern Utah, many of the dinosaur finds are on display at the Natural History Museum of Utah at the Rio Tinto Center at the University of Utah.

And the research is far from complete. Scott Sampson, vice president of research and collections at the Denver Museum of Nature & Science, states that, “Grand Staircase-Escalante National Monument is the last great, largely unexplored dinosaur boneyard in the lower 48 states. Many more amazing discoveries of dinosaurs and other Cretaceous creatures remain to be unearthed there.”

“It’s very exciting to see everyone else get the chance to find out what a select group of scientists have known for almost twenty years, that Grand Staircase has a world class paleontology resource and is producing cutting edge research,” says Alan Titus, paleontologist at the Monument. “We truly are advancing the boundaries of paleontology here.

Where the research was conducted

Grand Staircase-Escalante National Monument is a Bureau of Land Management-administered national monument comprising nearly 1.9 million acres of high desert terrain in south-central Utah.  It was established by executive order in 1996 to protect the vast geological, paleontological, biological and cultural scientific resources in this area.

How the research is funded

The 2013 fieldwork featured in the National Geographic article was funded by grant number EC0620-13 from the Committee for Research & Exploration of the National Geographic Society.  Fieldwork and research over the past 14 years have been funded by grants from the Bureau of Land Management and National Science Foundation, with additional funding from the University of Utah and Denver Museum of Nature & Science. All work was done under valid scientific permits issued by the Bureau of Land Management.

To request use of any images shown in the National Geographic article, please contact: