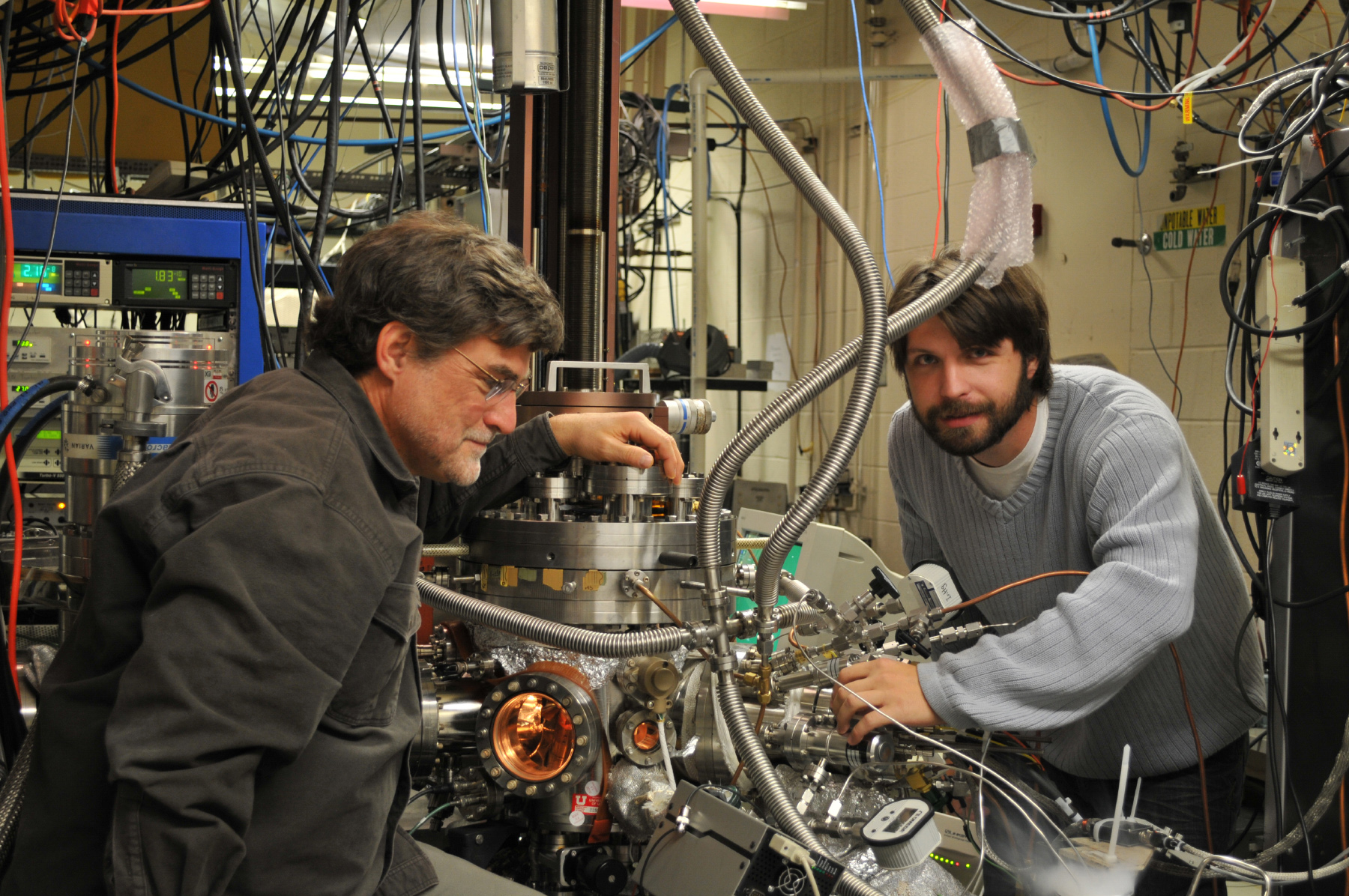 Nov. 5, 2009 – University of Utah chemists demonstrated the first conclusive link between the size of catalyst particles on a solid surface, their electronic properties and their ability to speed chemical reactions. The study is a step toward the goal of designing cheaper, more efficient catalysts to increase energy production, reduce Earth-warming gases and manufacture a wide variety of goods from medicines to gasoline.

Catalysts are substances that speed chemical reactions without being consumed by the reaction. They are used to manufacture most chemicals and many industrial products. The world’s economy depends on them.

“One of the big uncertainties in catalysis is that no one really understands what size particles of the catalyst actually make a chemical reaction happen,” says Scott Anderson, a University of Utah chemistry professor and senior author of the study in the Friday, Nov. 6 issue of the journal Science. “If we could understand what factors control activity in catalysts, then we could make better and less expensive catalysts.”

“Most catalysts are expensive noble metals like gold or palladium or platinum,” he adds. “Say in a gold catalyst, most of the metal is in the form of large particles, but those large particles are inactive and only nanoparticles with about 10 atoms are active. That means more than 90 percent of gold in the catalyst isn’t doing anything. If you could make a catalyst with only the right size particles, you could save 90 percent of the cost or more.”

In addition, “there’s a huge amount of interest in learning how to make catalysts out of much less expensive base metals like copper, nickel and zinc,” Anderson says. “And the way you are going to do that is by ‘tuning’ their chemical properties, which means tuning the electronic properties because the electrons control the chemistry.”

In the new study, Anderson and his students took a step toward “tuning” catalysts to have desired properties by demonstrating, for the first time, that the size of metal catalyst “nanoparticles” deposited on a surface affects not only the catalyst’s level of activity, but the particles’ electronic properties.

The Economy Depends on Catalysts

“Catalysts are a huge part of the economy,” Anderson says. “Catalysts are used for practically every industrial process, from making gasoline and polymers to pollution remediation and rocket thrusters.”

Catalysts are used in 90 percent of U.S. chemical manufacturing processes and to make more than 20 percent of all industrial products, and those processes consume large amounts of energy, according to the U.S. Department of Energy (DOE).

Thus, improving the efficiency of catalysts is “the key to both energy savings and carbon dioxide emissions reductions,” the agency says.

The North American Catalysis Society says catalysts contribute 35 percent or more of global Gross Domestic Product. “The biggest part of this contribution comes from generation of high energy fuels (gasoline, diesel, hydrogen), which depend critically on the use of small amounts of catalysts in … petroleum refineries,” the group says.

“The development of inexpensive catalysts … is pivotal to energy capture, conversion and storage,” says Henry White, professor and chair of chemistry at the University of Utah. “This research is vital to the energy security of the nation.”

Catalyst Research: What Previous Studies and the New Study Showed

As the size of a catalyst metal particle is reduced into the nanoscale, its properties initially remain the same as a larger particle, Anderson says. But when the size is smaller than about 10 nanometers – containing about 10,000 atoms of catalyst – the movements of electrons in the metal are confined, so their inherent energies are increased.

When there are fewer than about 100 atoms in catalyst particles, the size variations also result in fluctuations in the electronic structure of the catalyst atoms. Those fluctuations strongly affect the particles’ ability to act as a catalyst, Anderson says.

Previous experiments documented that electronic and chemical properties of a catalyst are affected by the size of catalyst particles floating in a gas. But those isolated catalyst particles are quite different than catalysts that are mounted on a metal oxide surface – the way the catalyst metal is supported in real industrial catalysts.

Past experiments with catalysts mounted on a surface often included a wide variety of particle sizes. So those experiments failed to detect how the catalyst’s chemical activity and electronic properties vary depending with the size of individual particles.

The new study used palladium particles of specific sizes that were deposited on titanium dioxide and used to convert carbon monoxide into carbon dioxide.

The study not only showed how catalytic activity varies with catalyst particle size, “but we have been able to correlate that size dependence with observed electronic differences in the catalyst particles,” Kaden says. “People had speculated this should be happening, but no one has ever seen it.”

Anderson says it is the first demonstration of a strong correlation between the size and activity of a catalyst on a metal surface and electronic properties of the catalyst.

Using an elaborate apparatus in Anderson’s laboratory, the chemists aimed a laser beam to vaporize palladium, creating electrically charged, palladium nanoparticles in a vapor carried by a stream of helium gas.

Electromagnetic fields are used to capture the particles and send them through a mass spectrometer, which selects only the sizes of palladium particles Anderson and colleagues want to study. The desired particles then are deposited on a single crystal of titanium oxide that measures less than a half-inch on a side.