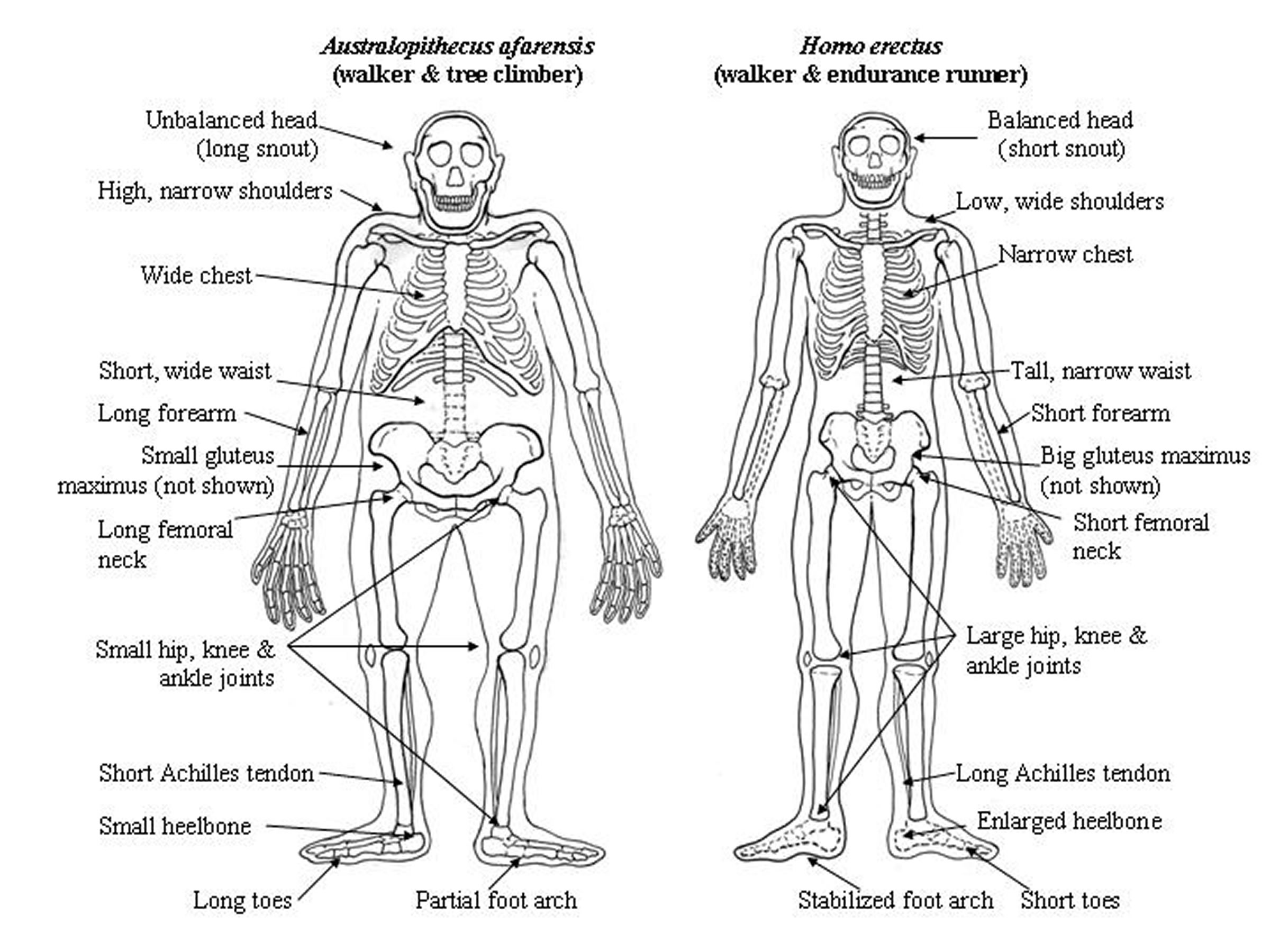 Nov. 17, 2004 – Humans evolved from ape-like ancestors because they needed to run long distances – perhaps to hunt animals or scavenge carcasses on Africa’s vast savannah – and the ability to run shaped our anatomy, making us look like we do today.

That is the conclusion of a study published in the Nov. 18 issue of the journal Nature by University of Utah biologist Dennis Bramble and Harvard University anthropologist Daniel Lieberman. The study is featured on Nature‘s cover.

Bramble and Lieberman argue that our genus, Homo, evolved from more ape-like human ancestors, Australopithecus, 2 million or more years ago because natural selection favored the survival of australopithecines that could run and, over time, favored the perpetuation of human anatomical features that made long-distance running possible.

“We are very confident that strong selection for running – which came at the expense of the historical ability to live in trees – was instrumental in the origin of the modern human body form,” says Bramble, a professor of biology. “Running has substantially shaped human evolution. Running made us human – at least in an anatomical sense. We think running is one of the most transforming events in human history. We are arguing the emergence of humans is tied to the evolution of running.”

That conclusion is contrary to the conventional theory that running simply was a byproduct of the human ability to walk. Bipedalism – the ability to walk upright on two legs – evolved in the ape-like Australopithecus at least 4.5 million years ago while they also retained the ability to travel through the trees. Yet Homo with its “radically transformed body” did not evolve for another 3 million or more years – Homo habilis, Homo erectus and, finally, our species, Homo sapiens – so the ability to walk cannot explain anatomy of the modern human body, Bramble says.

“There were 2.5 million to 3 million years of bipedal walking [by australopithecines] without ever looking like a human, so is walking going to be what suddenly transforms the hominid body?” he asks. “We’re saying, no, walking won’t do that, but running will.”

Walking cannot explain most of the changes in body form that distinguish Homo from Australopithecus, which – when compared with Homo – had short legs, long forearms, high permanently “shrugged” shoulders, ankles that were not visibly apparent and more muscles connecting the shoulders to the head and neck, Bramble says. If natural selection had not favored running, “we would still look a lot like apes,” he adds.

I Run, Therefore I Am

Bramble and Lieberman examined 26 traits of the human body – many also seen in fossils of Homo erectus and some in Homo habilis – that enhanced the ability to run. Only some of them were needed for walking. Traits that aided running include leg and foot tendons and ligaments that act like springs, foot and toe structure that allows efficient use of the feet to push off, shoulders that rotate independently of the head and neck to allow better balance, and skeletal and muscle features that make the human body stronger, more stable and able to run more efficiently without overheating.

“We explain the simultaneous emergence of a whole bunch of anatomical features, literally from head to toe,” Bramble says. “We have a hypothesis that gives a functional explanation for how these features are linked to the unique mechanical demands of running, how they work together and why they emerged at the same time.”

Humans are poor sprinters compared with other running animals, which is partly why many scientists have dismissed running as a factor in human evolution. Human endurance running ability has been inadequately appreciated because of a failure to recognize that “high speed is not always important,” Bramble says. “What is important is combining reasonable speed with exceptional endurance.”

Another reason is that “scientists are in developed societies that are highly dependent on technology and artificial means of transport,” he adds. “But if those scientists had been embedded in a hunter-gatherer society, they’d have a different view of human locomotor abilities, including running.

Why Did Humans Start Running?

The researchers do not know why natural selection favored human ancestors who could run long distances. For one possibility, they cite previous research by University of Utah biologist David Carrier, who hypothesized that endurance running evolved in human ancestors so they could pursue predators long before the development of bows, arrows, nets and spear-throwers reduced the need to run long distances.

Another possibility is that early humans and their immediate ancestors ran to scavenge carcasses of dead animals – maybe so they could beat hyenas or other scavengers to dinner, or maybe to “get to the leftovers soon enough,” Bramble says.

Scavenging “is a more reliable source of food” than hunting, he adds. “If you are out in the African savannah and see a column of vultures on the horizon, the chance of there being a fresh carcass underneath the vultures is about 100 percent. If you are going to hunt down something in the heat, that’s a lot more work and the payoffs are less reliable” because the animal you are hunting often is “faster than you are.”

Here are anatomical characteristics that are unique to humans and that play a role in helping people run, according to the study:

— Skull features that help prevent overheating during running. As sweat evaporates from the scalp, forehead and face, the evaporation cools blood draining from the head. Veins carrying that cooled blood pass near the carotid arteries, thus helping cool blood flowing through the carotids to the brain.

— A more balanced head with a flatter face, smaller teeth and short snout, compared with australopithecines. That “shifts the center of mass back so it’s easier to balance your head when you are bobbing up and down running,” Bramble says.

— A ligament that runs from the back of the skull and neck down to the thoracic vertebrae, and acts as a shock absorber and helps the arms and shoulders counterbalance the head during running.

— Unlike apes and australopithecines, the shoulders in early humans were “decoupled” from the head and neck, allowing the body to rotate while the head aims forward during running.

— The tall human body – with a narrow trunk, waist and pelvis – creates more skin surface for our size, permitting greater cooling during running. It also lets the upper and lower body move independently, “which allows you to use your upper body to counteract the twisting forces from your swinging legs,” Bramble says.

— Shorter forearms in humans make it easier for the upper body to counterbalance the lower body during running. They also reduce the amount of muscle power needed to keep the arms flexed when running.

— Human vertebrae and disks are larger in diameter relative to body mass than are those in apes or australopithecines. “This is related to shock absorption,” says Bramble. “It allows the back to take bigger loads when human runners hit the ground.”

— The connection between the pelvis and spine is stronger and larger relative to body size in humans than in their ancestors, providing more stability and shock absorption during running.

— Human buttocks “are huge,” says Bramble. “Have you ever looked at an ape? They have no buns.” He says human buttocks “are muscles critical for stabilization in running” because they connect the femur – the large bone in each upper leg – to the trunk. Because people lean forward at the hip during running, the buttocks “keep you from pitching over on your nose each time a foot hits the ground.”

— Long legs, which chimps and australopithecines lack, let humans to take huge strides when running, Bramble says. So do ligaments and tendons – including the long Achilles tendon – which act like springs that store and release mechanical energy during running. The tendons and ligaments also mean human lower legs that are less muscular and lighter, requiring less energy to move them during running.

— Larger surface areas in the hip, knee and ankle joints, for improved shock absorption during running by spreading out the forces.

— The arrangement of bones in the human foot creates a stable or stiff arch that makes the whole foot more rigid, so the human runner can push off the ground more efficiently and utilize ligaments on the bottom of the feet as springs.

— Humans also evolved with an enlarged heel bone for better shock absorption, as well as shorter toes and a big toe that is fully drawn in toward the other toes for better pushing off during running.

The study by Bramble and Lieberman concludes: “Today, endurance running is primarily a form of exercise and recreation, but its roots may be as ancient as the origin of the human genus, and its demands a major contributing factor to the human body form.”