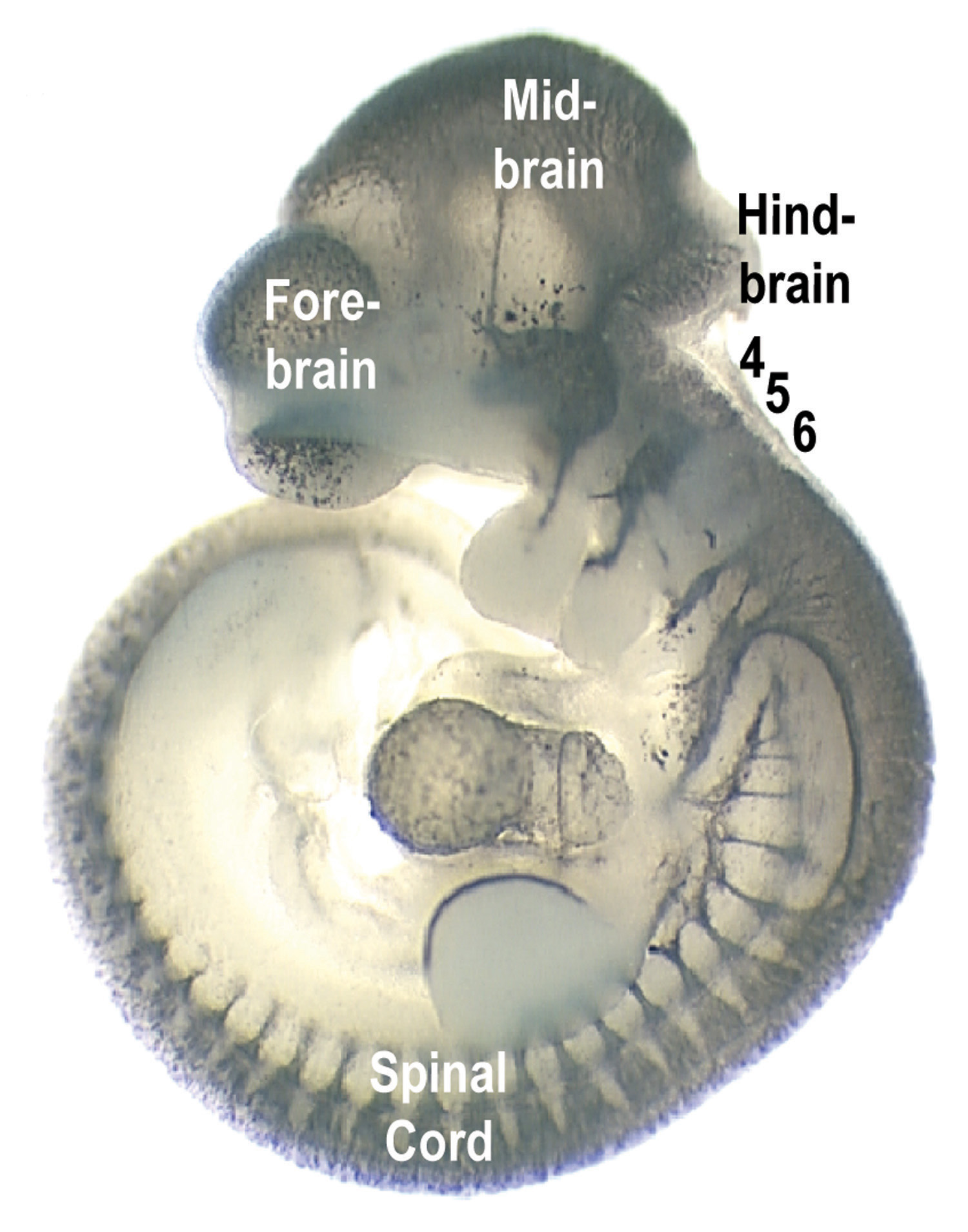 October 7, 2003 — University of Utah researchers have identified genes that ensure nerves develop in the correct part of the brain so mice can roll their eyeballs sideways, wiggle their whiskers, pull their ears back and blink their eyelids. The genes are common to all mammals, and so they likely help control human facial expressions such as smiles and frowns.

The findings will be published in the Nov. 1 issue of the journal Development. Capecchi conducted the research with Gary Gaufo, a postdoctoral fellow in human genetics and HHMI research associate, and geneticist Kirk Thomas, formerly of the University of Utah and Howard Hughes Medical Institute and now working at Hydra Biosciences in Boston.

The study used a method developed by Capecchi and for which he has won numerous awards. It is called gene targeting, and involves disabling or “knocking out” various genes in mice to see what goes wrong, thus learning what the genes normally do.

The researchers found that by crippling two genes, mice failed to develop nerves that normally connect to one of six sets of muscles controlling eyeball movements. Disabling other genes made mice develop an extra set of nerve fibers that control facial muscles.

The study deals with what are called homeobox or Hox genes, which are genes that orchestrate the actions of other genes to guide embryo development. The researchers looked specifically at how Hox genes direct development of the hindbrain, or rear part of the brain, so that nerve cells there extend cable-like fibers to control different parts of the body.

As an animal embryo develops, the hindbrain starts as a flat plate, then curls to form what is called the neural tube. The neural tube subdivides into seven or eight segments that ultimately become the hindbrain. The segmentation vanishes by the time the animal is born.

In one of the new study’s two main findings, Capecchi and colleagues showed that in segment 5 of the developing hindbrain, genes named Hoxa3 and Hoxb3 specify which neurons or nerve cells develop axons or nerve fibers to carry nerve impulses to muscles that control outward eye movements – the left eye looking left and the right eye looking right. When the two genes were disabled in mouse embryos, those nerve connections failed to form.

“Without these neurons controlling the eyes, you would have cross eyes,” Gaufo says.

This portion of the study demonstrated how Hox genes direct the formation of specific nerves that control muscles in specific parts of the body.

The mutant mice died before birth. Capecchi suspects the genetic mutations also leave the mice unable to breathe, possibly because Hox3 genes direct the formation of nerves that control breathing.

The study’s second main finding relates to the fact that even segments (2, 4, 6 and 8) of the hindbrain are more similar to each other than to the odd segments (1, 3, 5 and 7). The study showed how segments 4 and 6 become different from each other.

How? Capecchi and British researchers discovered in 1996 that the Hoxb1 gene orders the development of nerve cells in hindbrain segment 4 that send out nerve fibers to control facial muscles that let people smile, frown or pucker their lips, and that allow mice to wiggle their whiskers, pull back their ears and blink their eyes.

The new study found that the Hoxa3 and Hoxd3 genes normally suppress the Hoxb1 gene in segment 6 so that segment is different than segment 4. Segment 6 normally has nerves that control the throat and back of the tongue. But when the Hoxa3 gene and either Hoxb3 or Hoxd3 were crippled in mouse embryos, Hoxb1 became active in segment 6 of the hindbrain. So segment 6 started to develop the same kind of facial muscle-control nerves that normally are found only in segment 4 of the hindbrain. Thus, the Hox3 genes ensure that nerves controlling facial expressions form in the correct part of the brain.

These mutant mice also couldn’t breathe. If they had lived, two segments of the hindbrain would extend nerve fibers to the same part of the face, Gaufo says.

This portion of the study showed how Hox genes help turn a batch of identical cells into distinct segments of the developing hindbrain.

The power of Hox

The University of Utah study adds more information to the broader picture of how Hox genes operate to guide one of life’s most fundamental processes: embryo development.

As animal life evolved, spineless animals had up to 13 Hox genes. After backboned or vertebrate animals evolved from a common ancestor, each primitive Hox gene multiplied. When early mammals evolved, they had four sets of 13 Hox genes for a total of 52. Some mutated, allowing animals to evolve new and different body parts. Some Hox genes were redundant and vanished over the eons. So now, mice, people and other mammals have 13 groups of Hox genes, with two to four genes in each group, for a total of 39 Hox genes.

Gaufo says that in the new study, “we used the hindbrain to study the general function of Hox genes. In the hindbrain, like the rest of the body, the Hox genes provide information that makes each segment of the body develop unique from other segments.”

The study showed how the three Hox3 genes – Hoxa3, Hoxb3 and Hoxd3 – direct the development of some of the nerves that control muscles responsible for some eye and facial movements – and prevent such nerves from developing in the wrong part of the hindbrain.

“We’re beginning to outline the flow of information that makes specific nerve cells in a developing embryo,” says Gaufo. “By understanding this, we eventually may identify the causes of various diseases.”

Understanding how the nervous system develops is important because animals use it to sense and respond to their environment.

“If you don’t have that, you are a rock, you sit there and take whatever comes along,” Capecchi says. “So we are concerned with how the brain is put together and maintains a relationship between what we sense and how we react, how those two worlds have to keep in sync with each other, and how that process is accomplished.”

“Each set of Hox genes gives each segment of the hindbrain information so they each develop their own identity,” says Gaufo. “At the same time the Hox genes are also involved in telling a segment not to become like another segment. Although we used the hindbrain to observe this, it is likely occurring throughout the developing brain and spinal cord.”

Capecchi agrees: “The same principles are likely to apply to making nerves along the entire body.”

Capecchi has won numerous prizes for his role in developing gene targeting, including the National Medal of Science and the Albert Lasker Award for Basic Medical Research in 2001, the 2002-2003 Wolf Prize in Medicine and the 2003 Pezcoller Foundation-American Association for Cancer Research International Award for Cancer Research.