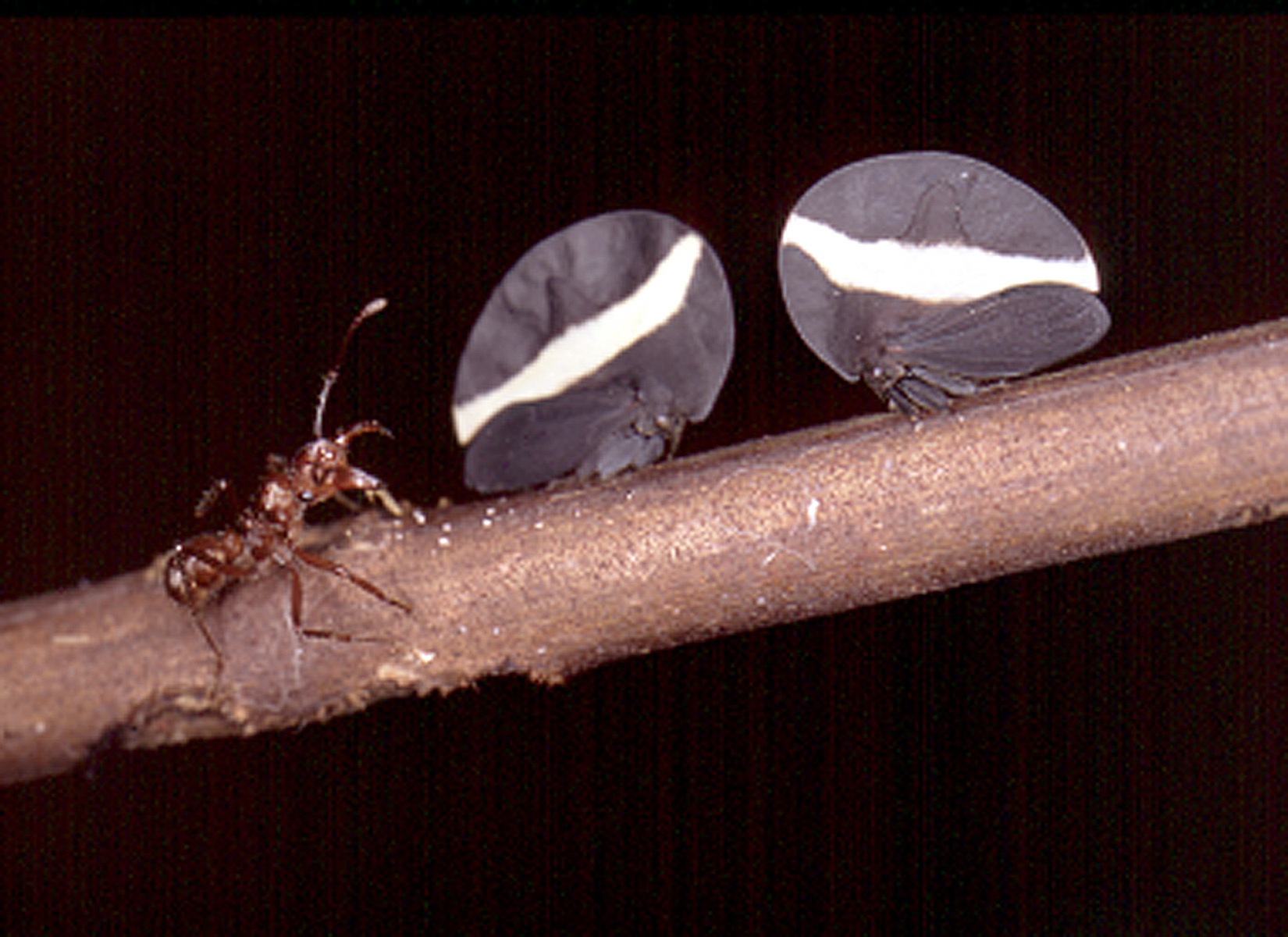 May 8, 2003 – Some tree-dwelling ants that were thought to eat other insects and animals actually look like plant-eaters when biologists analyzed nitrogen in their bodies. The study revealed the ants mostly eat plant nectar and the “honeydew” excreted by parasitic insects that suck sap from trees, suggesting the ants indirectly cause far more damage to tropical rainforests than previously believed.

The new study in the May 9 issue of the journal Science explains the mystery of why ants are so abundant in rainforest canopies. And it shows that “we have vastly underestimated the amount of resources that individual trees are losing to these ants and their sap-feeding associates,” known as scale insects and treehoppers, said Diane “Dinah” Davidson, principal author of the study and a professor of biology at the University of Utah.

“They [ants] are draining water, carbohydrates and amino acids – the building blocks of proteins – out of the plants. The plants don’t grow as much and they may die,” especially during droughts.

Global warming already threatens to retard plant growth in rainforests, but to fully understand the impact of climate change on shrinking tropical rainforests, “we have to understand all sources of plant loss, and this [plant damage by supposedly carnivorous ants] is a huge loss we haven’t recognized before,” Davidson says.

The research – which analyzed ratios of rare nitrogen-15 to common nitrogen-14 in ants, other insects and plants – provided some surprising answers to the question of who eats what and whom in tropical rainforests on opposite sides of the world in Peru and Brunei, a nation that shares the island of Borneo with portions of Malaysia and Indonesia.

Mass spectrometers weigh atoms, and can distinguish the rare isotope or form of nitrogen from the common form. The process by which organisms change living tissue into energy and waste creates a higher nitrogen-15-to-nitrogen-14 ratio the higher an organism is on the food chain. So plants have the lowest ratios, while predators have the highest ratios.

Yet Davidson and colleagues found the ratios were low in ants known as dolichoderines and formicines – both of which once were thought to get most of their nitrogen nutrients by preying on or scavenging other insects and animals. But their low ratios did not resemble the higher ratios of truly carnivorous ants that eat prey and scavenge dead animals. Instead, their nitrogen ratios were typical of leaf-chewing and sap-sucking insects and even plants themselves.

The study indicated the dolichoderine ants indirectly feed on trees and shrubs, even though they themselves do not eat plant leaves. Instead, they eat sugar-rich honeydew excreted by parasitic insects known as scale insects and treehoppers that are related to aphids and use needle-like mouth parts to suck sap from leaves and twigs. Scale insects resemble a small circular scar on a branch or leaf. Treehoppers often resemble a thorn on a plant. Others look somewhat like tiny sails.

“Plants have nasty chemicals to protect them against leaf-chewing herbivores like certain insects and monkeys,” says Davidson. “But the sap-suckers [treehoppers and scale insects] are unique because they bypass those chemical defenses. They have a little tiny soda straw for a mouth part and they use that to suck sap from plants.”

Birds, wasps and flies try to eat the sap-sucking treehoppers and scale insects, but dolichoderine ants protect them, and in exchange eat their honeydew, which is rich in sugar and amino acids. “That means the sap-suckers can become incredibly abundant,” Davidson says. “The sap-suckers that are tended by ants are among the most devastating herbivores of the rainforest. They can kill even large trees.”

Because abundant dolichoderine ants use this indirect method of extracting nutrients from trees and shrubs, it means ants damage or kill more rainforest plants than was believed.

“Tropical rainforests are the greatest repository of terrestrial biodiversity on Earth, and yet we are just beginning to unravel the secrets of their inaccessible canopies,” Davidson says. “Ants are a great example of this. Ants hold dominion over the canopy in terms of their numbers, biomass and, probably, functional significance. We have long assumed they fed as omnivores, obtaining much of their protein through hunting and scavenging of animal prey – i.e., though carnivory.”

Davidson says that for many years, scientists believed canopy ants primarily helped trees and shrubs by killing and eating leaf-chewing insects. In exchange, the plants secreted nectar and fat-rich “pearl bodies” to feed the ants.

But the study shows “we’ve assumed too much that ants are helpful to the trees and shrubs by killing and eating other insects that eat leaves,” she says. “There is some of that going on. But the vast majority of ants, the ones that are superabundant in the rainforest canopy, are tending sap-feeding insects [by eating their honeydew and protecting them]. The sap-feeding insects and the ants that tend them are parasites of those plants.”

Davidson, who is visiting Peru in May, says she has been doing research there for 20 years at the Cocha Cashu Biological Station. In areas with large colonies of particularly damaging ants, “you can just look around and see dead trees everywhere,” she says.

The study gave hints as to why some canopy-dwelling ants – known as formicines because they produce formic acid – also have nitrogen signatures characteristic of plant-eaters even though Davidson says they do protect trees from leaf-eating insects. These tree-helping ants feed on “extrafloral nectar” produced on leaves, fruits and the bases of flowers. Scientists assumed they also ate insects because the nectar is not rich enough in essential amino acids.

But Davidson speculates that many formicine ants get adequate nutrition because bacteria in their guts upgrade the nitrogen in nectar to essential amino acids that are missing in nectar but are needed for survival. She notes that bacteria in the guts of treehoppers and scale insects do the same thing, producing nutrient-rich honeydew for the dolichoderine ants.

While dolichoderine ants feed indirectly on trees by eating sap-sucker honeydew, the formicine ants eat nectar, so the trees lose resources even to their protectors.

“The total cost to the forest of herbivory is a lot larger than once thought because some of the plants are using a lot of resources [nectar] to feed ants that protect them from herbivores, and the others are losing a lot of resources to parasites [like scale insects and treehoppers] that are feeding ants,” Davidson says.

She says the presumption that tropical rainforest canopy ants were mainly carnivorous first was questioned in the early 1990s by a Harvard University student who noted how abundant ants were in rainforest canopies. Ants are far more abundant than any other insects in the rainforest canopy. That seemed to violate a general rule that populations of carnivores should not outnumber prey populations.

Davidson notes that weaver ants have been used in China for 1,700 years to suppress herbivores that feed on citrus trees. Because isotope studies of ants and other insects can reveal what species rank where in the food chain, the method shows “who is most predatory,” she says. “That’s the ant you want to transfer to your agricultural field.”

Biologists long have used mass spectrometers to analyze stable isotopes (which do not decay radioactively) and answer ecological questions such as those addressed in Davidson’s study. In the last few years, however, University of Utah biologist Jim Ehleringer has pioneered the use of stable isotope analysis to help federal agencies track the sources of counterfeit money, drugs like cocaine and heroin, explosives and biological warfare organisms. Davidson’s study used mass spectrometers in Ehleringer’s laboratory.