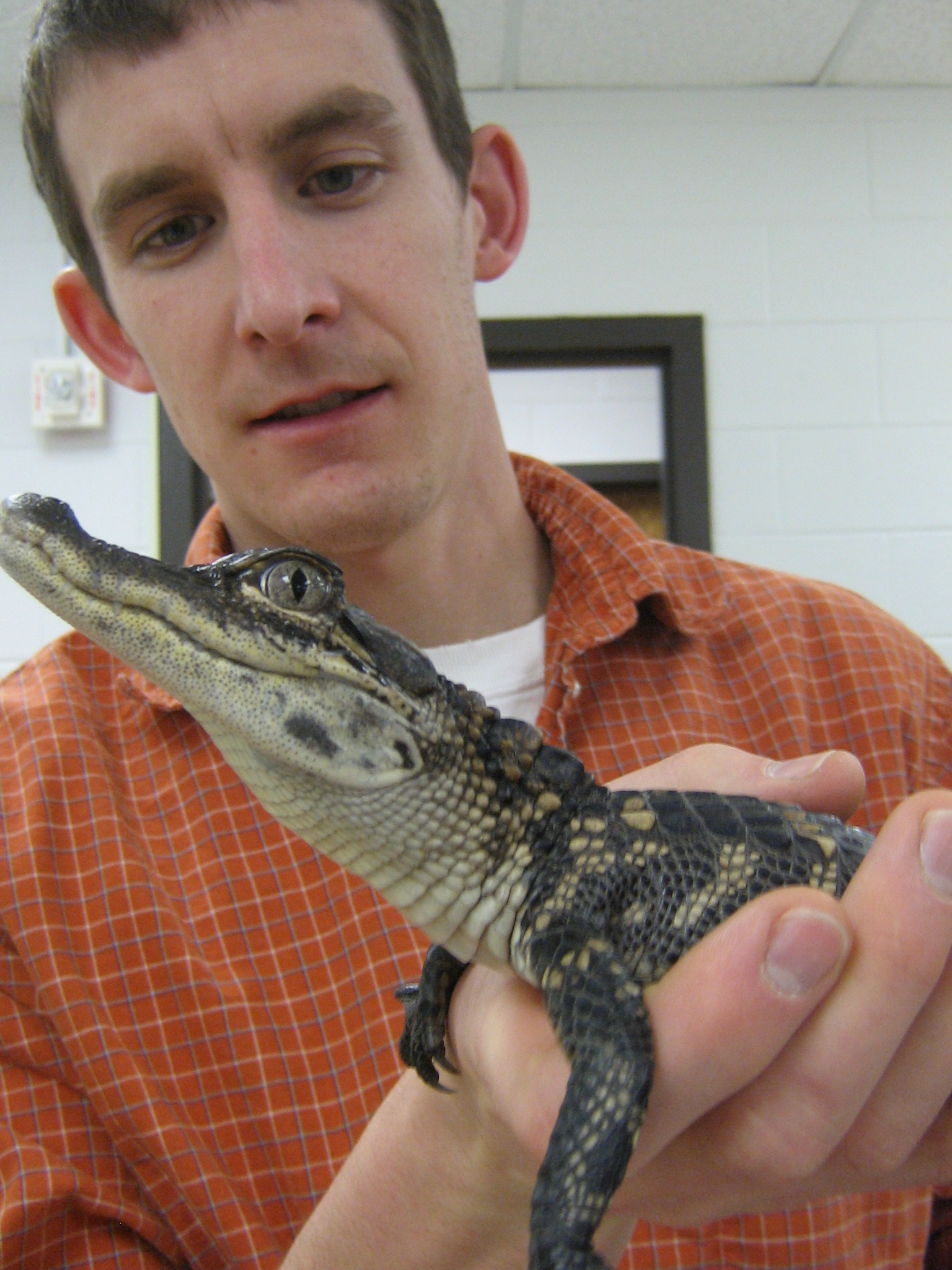 March 13, 2008 – Without a ripple in the water, alligators dive, surface or roll sideways, even though they lack flippers or fins. University of Utah biologists discovered gators maneuver silently by using their diaphragm, pelvic, abdominal and rib muscles to shift their lungs like internal floatation devices: toward the tail when they dive, toward the head when they surface and sideways when they roll.

“It allows them to navigate a watery environment without creating a lot of disturbance,” says doctoral student T.J. Uriona. “This is probably really important while they are trying to sneak up on an animal but don’t want to create ripples.”

The discovery in American alligators suggests “special muscles that manipulate the position of the lungs – and thus the center of buoyancy – may be an underappreciated but important means for other aquatic animals to maneuver in water without actively swimming,” says C.G. Farmer, an assistant professor of biology.

Those animals include crocodiles, African clawed frogs, some salamanders, turtles and manatees, she adds, noting that the use of muscles to move the lungs may be “incredibly important or you would not see it evolve repeatedly.

The study by Uriona and Farmer will be published in the April 2008 issue of The Journal of Experimental Biology, which is set for online publication Friday, March 14.

The researchers found that alligators are somewhat like pilots using controls to adjust an aircraft’s pitch and roll, except the reptiles’ controls are muscles that help them shift their lungs backward to dive, forward to surface or sideways to roll.

Farmer says the new study asked how gators “manage to maneuver so gracefully without the fins and flippers used by fish, seals and other adept swimmers.”

“The secret to their aquatic agility lies in the use of several muscles, such as the diaphragmatic muscle, to shift the position of their lungs. The gases in the lungs buoy up the animal, but if shifted forward and backward cause the animal to pivot in a seesaw motion. When the animals displace gases to the right or left side of the body, they roll.”

Uriona says that during the Triassic Period, which began 250 million years ago, the crocodilian ancestors of alligators were cat-sized animals that lived only on land.

“Until now, it was believed the diaphragmatic muscle evolved to help them breathe and run at the same time,” he says. “Showing they are actually using it to move around in water gives an alternative explanation for why the muscle evolved.”

It also suggests the muscle didn’t evolve until after crocodilians took to the water during the Cretaceous Period, which began 145 million years ago. During that time alligators’ ancestors also evolved a flattened skull, shorter limbs and a big tail.

The study involved five, 2-year-old American alligators (Alligator mississippiensis) from Louisiana’s Rockefeller Wildlife Refuge near Grand Chenier. The gators were only 15 inches to 20 inches long, compared with adults that can reach 15 feet.

Electrodes were implanted on five sets of muscles so their activity could be monitored while the alligators maneuvered in 100-gallon fish tanks. One set of muscles played no role in moving the lungs to help the gators dive and maneuver, but four did:

Of the muscles listed above, some are used for inhaling and some for exhaling. Yet the study found all four muscle types work together to help an alligator shift its lungs so it can rock downward to dive or roll side-to-side. The tail also helps gators roll.

“The muscles are on when they are diving, and the muscles shut off when they start returning to the surface,” Uriona says.

As part of the study, Uriona created small weights – equal to only 2.5 percent of each gator’s body weight – by wrapping buckshot pellets in duct tape.

When a weight was duct-taped to an alligator’s snout, it helped the alligator dive. As a result, the electrical recordings showed that there was reduced activity of muscles needed to help diving – muscles that pull the lungs backward to help lift the tail.

When a weight was duct-taped at the base of a gator’s tail, it made diving more difficult, and the biologists recorded increased activity of muscles needed to pull the lungs back to assist diving.

“We showed with the weights that they can adjust how much they activate those muscles to meet whatever conditions require,” Uriona says. In other words, the gators exert fine control over the muscles used to shift their lungs for aquatic maneuvers.

Gators on an Evolutionary Roll

“It may be that instead of these muscles arising for breathing, they arose for moving around in the water and later were co-opted for breathing,” Uriona says.

He says natural selection would favor the development of muscles to move the lungs for quiet maneuvers in water because animals with such ability can easily “move around in the water, either trying to sneak up and eat something, or avoid being eaten.”

Uriona says the diaphragmaticus likely began as part of the rectus abdominis muscle and evolved into a separate muscle.

If, instead, the diaphragmaticus first evolved to help ancient crocs maneuver in water, only the first step would have been required. When the diaphragm-like muscle and other muscles later evolved to assist breathing, then the second step was needed.

Uriona and Farmer say it is simpler evolutionarily for one step to occur at a time, making it more logical that the diaphragm evolved first when early crocodilians took to the water, and began to play a role in breathing only later.

To turn or otherwise maneuver in water or air, animals must generate lift or drag – and that requires speed, Farmer says. So the ability to move the lungs to maneuver “is probably key for slow swimmers,” she adds. “This mechanism allows these animals to manipulate their posture without generating lift or drag – without any swimming movement like the flick of a tail or swish of a fin.”

The study was funded by the National Science Foundation, the University of Utah and a private donor, Sharon Meyers of California.