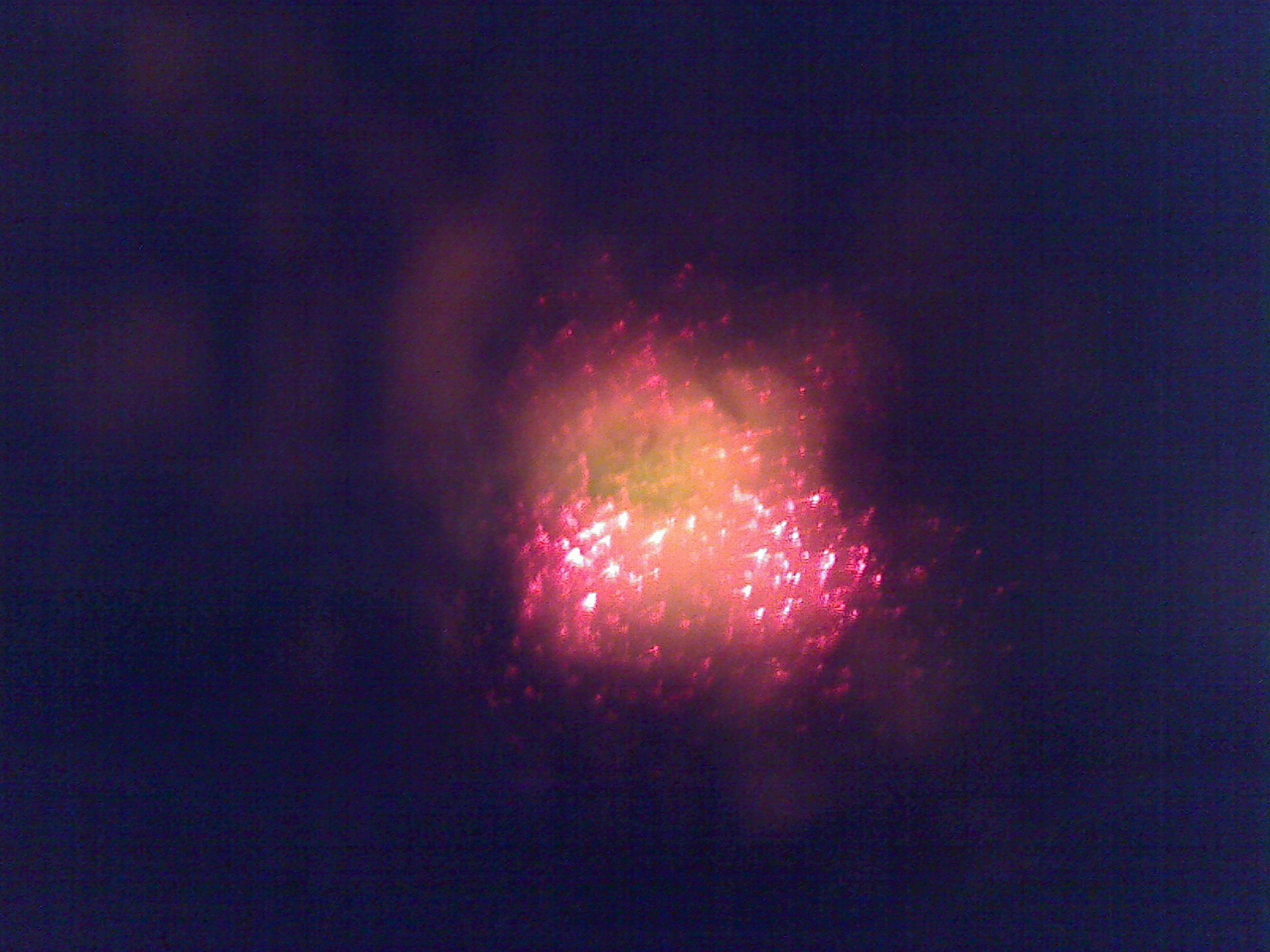 Jan. 24, 2010 – When University of Utah scientists discovered a new kind of laser that was generated by an electrically conducting plastic or polymer, no one could explain how it worked and some doubted it was real. Now, a decade later, the Utah researchers have found these “random lasers” occur because of natural, mirror-like cavities in the polymers, and they say such lasers may prove useful for diagnosing cancer.

“Nobody knew how it worked until now,” says Z. Valy Vardeny, a distinguished professor of physics and senior author of the new study, published online Sunday, Jan. 24 in the journal Nature Physics. “We succeeded in imaging the cavities. This is a big step in our understanding of this bizarre phenomenon, which not many people believed.”

Materials or “gain media” that generate conventional lasers are put in an ordered structure known as “lossless resonators” – often mirrors – that generate light without losing much of it. Random laser materials, in contrast, are disordered and lose some light.

Or as Vardeny puts it: “You can get lasing out of junky materials if they contain molecules that glow. Out of disorder comes perfect order.”

In the new study, Vardeny and colleagues created images to reveal the natural cavities within a “pi-conjugated polymer film,” which is a thin film of an organic polymer – named DOO-PPV – that conducts electricity even though it is a plastic-like material. (“Pi-conjugated” refers to the material’s electronic structure.)

The microscopic cavities – natural irregularities within the plastic – act together like the mirrors in regular resonators that help amplify the light in a conventional laser.

Lasers “are carefully designed and constructed to produce laser emission,” says study coauthor Randy Polson, a senior optical engineer at the University of Utah’s Dixon Laser Institute. “Surprisingly, there is a class of lasers where laser emission happens from materials that are literally shaken together. These are called random lasers since the emission happens from an uncontrolled configuration” – a disordered rather than crystal structure within the “lasing medium” – the material used to generate the laser.

“There has been some disagreement how random lasers operate. For an analogy, imagine you are outside a sports stadium and hear the roar of the crowd. Is the noise initiated throughout the stadium at the same time (led by cheerleaders shouting ‘Go! go!’), or are people yelling on their own (‘Great catch,’ ‘Yea!’)?”

“Our work has shown that the emission from random lasers happens with one emitter at a time, like individuals in the crowd yelling unconnected shouts,” Polson says.

Vardeny and Polson conducted the study with first author Abdullah Tulek, who now works in Turkey but was a University of Utah doctoral student at the time. The study was funded by the U.S. Department of Energy and the National Science Foundation.

Laser stands for Light Amplification by Stimulated Emission of Radiation. Unlike a bulb, which emits many wavelengths of light in all directions, conventional laser light has one wavelength and moves as a beam in one direction with light waves in lockstep.

Vardeny explains how a laser beam is emitted. First, “you excite a molecule or a chromophore” – a dye or other substance that emits light – using electricity or another source of light. The excited molecule emits a photon or light particle. The photons travel and stimulate other chromophore molecules to emit additional light.

As lasers were developed in the 1960s, researchers realized that if you put more chromophores together in a cavity in some crystalline material, the optical cavity would act like a mirror, amplifying (the “a” in laser) the stimulated emission of light.

Two other kinds of lasers have been demonstrated, but not used for practical purposes: superradiance and superfluorescence lasers, in which chromophores “feel” each other to act in concert and produce laser light without mirrors.

Pi-conjugated polymers luminesce when excited by electricity or a light source. They emit various colors, and are used to make light-emitting diodes (LEDs) that are increasingly common in everything from traffic signals to Christmas lights.

In 1999, Vardeny and colleagues published in the journal Physical Review B their discovery of a fifth kind of laser – the random laser. In a film of the polymer DOO-PPV, they produced laser light of multiple wavelengths within a narrow band of red.

It appeared to be a cavity laser because of the nature of its light emissions – except no one could find cavities in the polymer film.

Physicists “couldn’t understand it,” Vardeny says. “Nobody really understood it.”

Yet, other groups of researchers soon found random lasing in other materials.

The New Study: Order within a Disordered Material

In conventional lasers, cavities are created by carefully placing mirrors around the medium that contains the chromophore material, be it a crystal, gas or dye, Vardeny says. The new study shows random lasers have tiny, built-in, natural mirrors, he adds.

To make pictures of laser-generating cavities within the DOO-PPV polymer, the scientists focused a green, conventional laser pulse on a thin film of the polymer, stimulating red random laser emission from the film. By focusing a lens in a certain way, they made 10,000 images of the red laser light spectrum emitted by microscopic squares within the film, then assembled them into an image of the entire piece of polymer film.

They revealed the mirror-like cavities by showing adjacent pixels with the same red light spectrum and the same above-average index of refraction, which is a measure of how fast light travels within a material. When they mapped areas of above-average refraction index within the DOO-PPV polymer, those areas were connected to form loops, which act as mirror-like cavities to generate laser light, Vardeny says.

In a similar manner, the researchers transformed the light wave patterns for various spots on the polymer, and that revealed there were cavities within the material.

Vardeny and his colleagues now are conducting more research aimed at developing and commercializing random lasers to distinguish cancerous from noncancerous human tissue. In a 2004 study in Applied Physics Letters, they infused human colon tissue – normal and tumor – with a red fluorescent dye that generates random laser light when stimulated.

They could distinguish tumor from normal colon tissue because the tumor emitted more individual lines of random laser light, possibly because its structure was more disordered than normal tissue.

“The disorder in cancerous tissue is much more chaotic than that in a benign tissue,” says Vardeny.

Pathologists now look for abnormalities that indicate cancer, but Vardeny says the random lasing method has potential for automating tissue examinations for cancer.