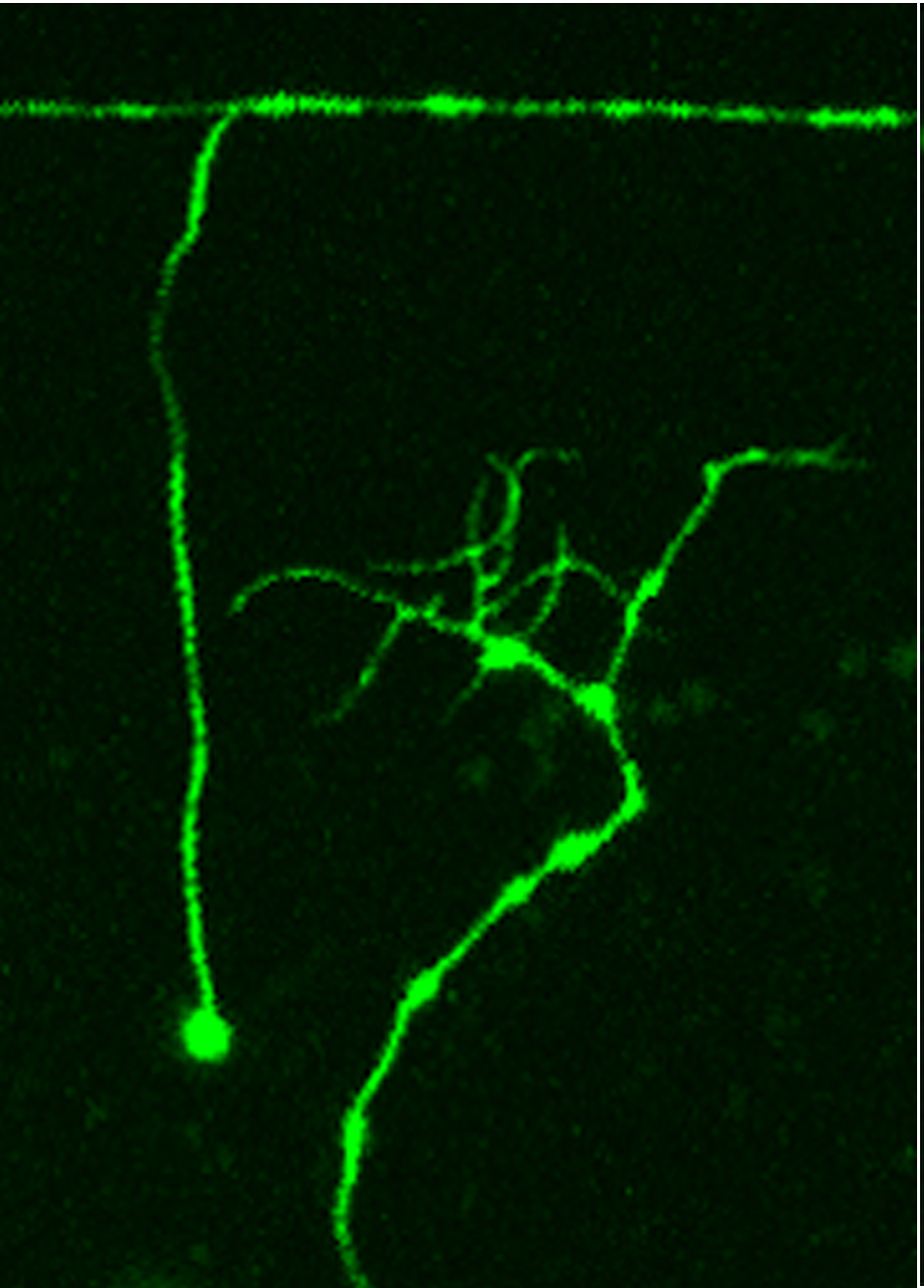 Jan. 22, 2009 – University of Utah scientists identified a worm gene that is essential for damaged nerve cells to regenerate, and showed they could speed nerve regeneration by over-activating the gene – a step toward new treatments for nerves injured by trauma or disease.

Oddly, the gene and a related “pathway” – a chain of molecular events – is not required for normal nerve development in embryos, the researchers report in the Jan. 22 issue of Science Express, the online edition of the journal Science.
“We discovered a molecular target for a future drug that could vastly improve the ability of a neuron to regenerate after injury,” either from trauma or disease, says biology Professor Michael Bastiani, leader of the research team and a member of the Brain Institute at the University of Utah.

Study coauthor and biology Professor Erik Jorgensen – the Brain Institute’s scientific director – says: “In the future, we would like to develop drugs that could activate this chain of molecular events in nerve cells and stimulate regeneration of diseased and injured nerve cells. At this point, we can’t do that. But this study gives us hope that in the future, we will have a rational approach for stimulating regeneration.”

“Eventually, this may be a way to treat spinal cord injuries,” adds study coauthor Paola Nix, a biology research associate.

Bastiani says an ability to stimulate nerve regeneration one day also may help treat multiple sclerosis, in which nerves are damaged by loss of their myelin coating.

He says the study used nematode worms, which “have the same molecules performing similar functions in humans. We found a pathway that not only regenerates nerves in the worm but also exists in humans, and we think it serves the same purpose.”

Nix adds: “The next thing to do would be to test this gene in [other] animals and eventually humans to see if it plays the same role.”

The core of the molecular chain of events involves four genes. The most important is dlk-1¸ which is known as a “MAP kinase kinase kinase” or MAPKKK. When the Utah scientists “overexpressed” the dlk-1 gene in worms – making it more active than normal – broken nerves in the worms regenerated much more quickly than expected. When dlk-1 was blocked, regeneration did not occur.

The study’s other authors were Marc Hammarlund, a former University of Utah postdoctoral researcher now at Yale University, and lab technician Linda Hauth.

The research was funded initially by the Craig H. Neilsen Foundation, and the scientists dedicated it to Neilsen, a Utah native and chairman of Ameristar Casinos. Neilsen was paralyzed by a spinal cord injury during a 1985 car wreck. He funded the project in hope of finding a cure. He died in 2006, while the study was underway.

Searching for Nerve Regeneration Genes
Nerve cells have the ability to regenerate in the embryo, but lose the ability as an organism ages. Most adult nerve cells “regenerate poorly or not al all,” the researchers write, although peripheral nerve cells – like those in the arms and legs – regenerate better than central nervous system neurons in the brain and spinal cord. No one knows why.
The new study focused on regeneration of motor neuron axons – the wiry part of every nerve cell that transmits signals to other nerve cells or to cells such as muscle.

The research team developed a “genetic screen” to look for genes involved in nerve regeneration. They mutated a worm gene that produces a protein named beta spectrin, which helps keep nerve cells flexible. Mutant worms lacked beta spectrin, so their nerves broke as they crawled around a culture dish.
The scientists used a method named RNA interference to suppress the functioning of 5,000 of the 20,000 worm genes – one at a time. People also have those 5,000 genes.

Each gene was “knocked down one by one, and we looked for the loss of the ability to regenerate,” Nix says.
The researchers were able to watch nerves regenerate – or not – because they had placed a jellyfish gene in the worms, which made the worms’ nerve cells glow fluorescent green – easy to see when observed under a microscope.
They found the dlk-1 gene was crucial for regeneration because every time the scientists blocked it, nerve regeneration was halted.

More than One Way to Regenerate a Neuron
After identifying dlk-1, the biologists determined the effects of other genes on regeneration, allowing them to “map” genes and proteins involved in the regeneration pathway. The “core” of this pathway – including dlk-1 and three other genes – “activates this entire program of regeneration,” Bastiani says.

“One of the coolest things is we can improve regeneration,” Nix says. “We originally looked at loss of this gene, dlk-1. The loss blocks regeneration. We can cut the nerve in these mutants and they don’t regenerate. So we see worms with nerve stumps that don’t do anything. But when we overproduce dlk-1 – make an excess amount of it – then we see an improvement in regeneration.”

The chain of events the researchers identified as playing an essential role in nerve regeneration is known as a “MAP kinase pathway.” Various MAP kinases play roles in cell division, response to stress, and cell specialization, Jorgensen says.

The pathway discovered in the new study “is unique in that it is not used by the nervous system during normal embryo development, yet it is absolutely required for regeneration,” Bastiani says. “Most of us believed that virtually everything we found in regeneration also would be involved in development. So it is surprising.”

He says while the dlk-1 gene is the most obvious target for new drugs to stimulate nerve regeneration, other genes in the pathway also could be potential targets.

Caution Urged as Hopes Have Been Dashed Before
Bastiani and Jorgensen say the new findings are particularly promising because another approach to spurring regeneration has failed to yield fruit.

About two decades ago, other researchers discovered that molecules in glial cells – which physically support nerve cells in the brain – inhibit regeneration of nerve cells in adult organisms.

Scientists “have hoped for many years that by being able to eliminate these molecules that inhibit regrowth, that we would be able to stimulate nerve regeneration,” Jorgensen says. Mice treated with that approach so far have showed only mild improvement in nerve regeneration, says Bastiani.

Yet, the study found possible impediments to the new approach. To trigger regeneration, the DLK-1 protein (produced under orders from the dlk-1 gene) “has to act around the time of injury,” Bastiani says. “This might be a real problem because, as a drug target, there might be a time window in which you have to activate this pathway to stimulate regeneration after a spinal cord injury.”

If worms and other animals have genes like dlk-1 that can enhance nerve regeneration, why are those genes normally inactive or only somewhat active?

“You might argue there is a tradeoff between regeneration ability and maintenance and stability,” Bastiani says. “The tradeoff for you and me is we want memories that last a lifetime,” so stability of the nerve in our brain is desirable – not a lot of nerve turnover and regeneration. “The tradeoff is you lose the ability to regenerate robustly.”