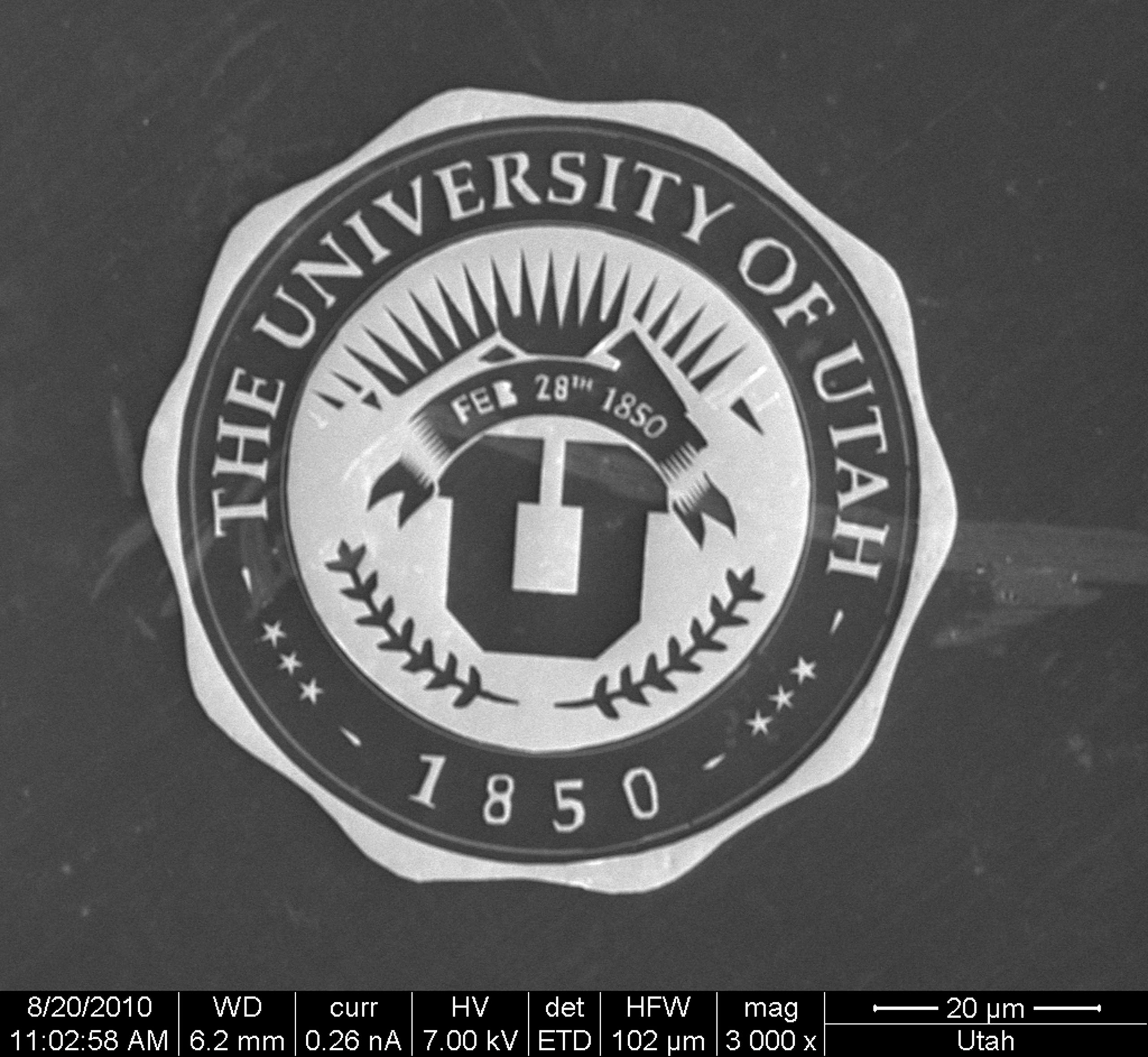 Sept. 14, 2010 — In an example of how a technology wonk displays school spirit, an engineer has created a golden University of Utah logo that is smaller than the width of an average human hair.

The gold etching is only 70 microns across – that’s 70 millionths of a meter, or less than three one-thousandths of an inch, which is about the diameter of a blonde hair, among the thinnest types of human hair.

The etching was done on a silicon base using a thin beam of electrons from one of two electron microscopes bought by the university in 2008. While the technique of electron-beam lithography is not new, the medallion symbol is more complex than the patterns commonly made.

“People usually do things like lines and rectangles,” says Randy Polson, who made the tiny medallion and is a senior optical engineer for the university’s Department of Physics and Astronomy. “The software that came with the microscope included some stick-figure demos. I thought, ‘Hey, I can do better than a stick figure.'”

The medallion is one of several official logos used by the university. It depicts the university’s block U symbol and founding date, with a background of mountains and rays of sunshine.

It is engraved on a chip of silicon two-fifths of an inch square. To the naked eye it is a barely discernable speck. Under a conventional light microscope, it looks like a fuzzy circle. Its full detail is revealed only by a scanning electron microscope – the same device that was used to create it.

In the electron microscope image, the gold-covered parts appear white, while the silicon background appears black. The finest line on the medallion encircles the design. That line is a mere 20 nanometers thick. That’s 20 billionths of a meter, or about eight ten-millionths of an inch wide. That is the length of chain of 75 gold atoms, Polson says.

Scanning electron microscopes are used most often to visualize the surface structure of objects. The microscope sends a thin beam of electrons onto the specimen, scanning back and forth over the surface.

To create the tiny University of Utah medallion, Polson first coated the silicon chip with a thin layer of “photoresist,” a polymer resin made of long chains of molecules. He then focused the electron beam on the resist surface, breaking the chains into short fragments everywhere he wanted metal to adhere.

The process took about an hour. However, the bulk of the project consisted of adjusting and refining the microscope settings, part of Polson’s job to make the microscope available for research. It took months for Polson to calibrate the microscope and figure out exactly what instructions to give it in order to obtain a crisp image of the university medallion.

Challenges included determining the length of time to expose the resist – too short and not enough resist washes off, too long and the image looks fuzzy – and adjusting the shape of the electron beam, which has a tendency to be elliptical instead of round.

In addition to maintaining the microscope, Polson assists university and private researchers who want to use it for a fee. People seek his help with the lithography feature for tasks such as fabricating nanowires and other components for nanoelectronics. The imaging capabilities are used in industries as diverse as pharmaceuticals and metallurgical engineering.

Researchers and businesses interested in using the university’s electron microscopes may contact Matt DeLong, technical facilities director, at (801) 581-7462 or delong@physics.utah.edu