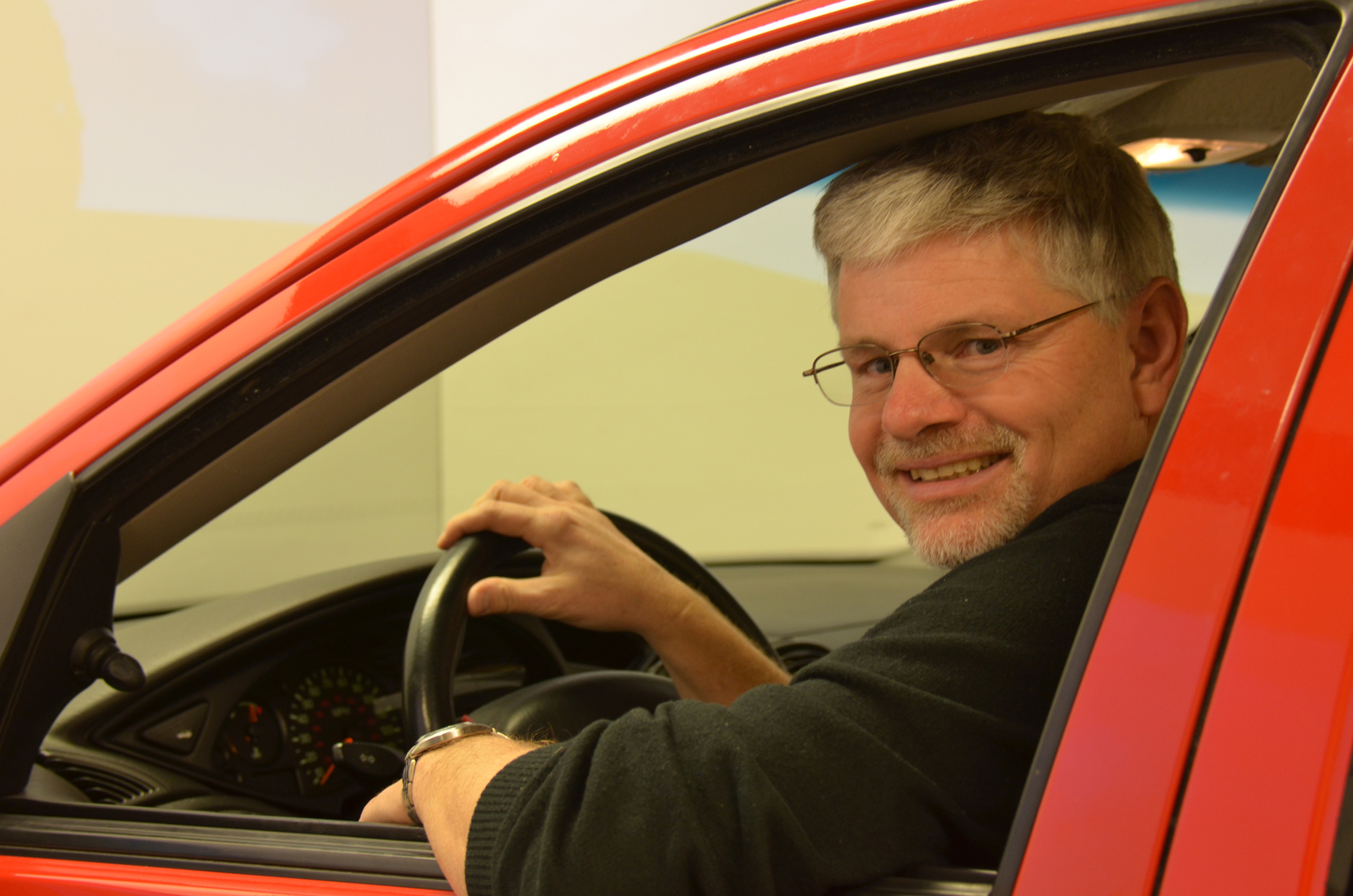 Utah media: To shoot video or photos of the University of Utah’s driving simulator in the Social and Behavioral Sciences Bldg. June 11-13, contact study coauthor James Coleman (below). Most national TV networks are expected to cover the story from Washington. Contact Lee Siegel or Nancy White for a copy of the study.

June 12, 2013 – Using hands-free devices to talk, text or send e-mail while driving is distracting and risky, contrary to what many people believe, says a new University of Utah study issued today by the AAA Foundation for Traffic Safety.

“Our research shows that hands-free is not risk-free,” says University of Utah psychology Professor David Strayer, lead author of the study, which he conducted for the foundation arm of the nonprofit AAA, formerly known as the American Automobile Association.

“These new, speech-based technologies in the car can overload the driver’s attention and impair their ability to drive safely,” says Strayer. “An unintended consequence of trying to make driving safer – by moving to speech-to-text, in-vehicle systems – may actually overload the driver and make them less safe.”

“Just because you can update Facebook while driving doesn’t mean that it is safe to do so,” he adds. “Don’t assume that if your eyes are on the road and your hands are on the wheel that you are unimpaired. If you don’t pay attention then you are a potential hazard on the roadway.”

In a 2006 study, Strayer first showed talking on a hands-free cell phone was just as distracting as using a hand-held phone while driving, but the message has failed to fully connect with the public, with many people believing hands-free devices are safer. But now, with the backing of the AAA, Strayer hopes people realize they are risking their lives and those of others by using distracting hands-free phone, e-mailing, texting and social media technologies while driving.

Strayer conducted the study with these other members of the University of Utah Department of Psychology: Joel M. Cooper, research assistant professor of psychology; and doctoral students Jonna Turrill, James Coleman and Nate Medeiros-Ward and Francesco Biondi.

WASHINGTON, June 12, 2013 – Hands-free technologies might make it easier for motorists to text, talk on the phone, or even use Facebook while they drive, but new findings from the AAA Foundation for Traffic Safety show dangerous mental distractions exist even when drivers keep their hands on the wheel and their eyes on the road.

The research found that as mental workload and distractions increase, reaction time slows, brain function is compromised, drivers scan the road less and miss visual cues, potentially resulting in drivers not seeing items right in front of them including stop signs and pedestrians.

This is the most comprehensive study of its kind to look at the mental distraction of drivers and arms AAA with evidence to appeal to the public to not use these voice-to-text features while their vehicle is in motion.

With a predicted five-fold increase in infotainment systems in new vehicles by 2018, AAA is calling for action as result of this landmark research.

“There is a looming public safety crisis ahead with the future proliferation of these in-vehicle technologies,” said AAA President and CEO Robert L. Darbelnet. “It’s time to consider limiting new and potentially dangerous mental  distractions built into cars, particularly with the common public misperception that hands-free means risk-free.”

Cognitive distraction expert David Strayer and his research team at the University of Utah measured brainwaves, eye movement and other metrics to assess what happens to drivers’ mental workload when they attempt to do multiple things at once, building upon decades of research in the aerospace and automotive industries. The research included:

— Cameras mounted inside an instrumented car to track eye and head movement of drivers.

— A Detection-Response-Task device known as the “DRT” was used to record driver reaction time in response to triggers of red and green lights added to their field of vision.

— A special electroencephalographic (EEG)-configured skull cap was used to chart participants’ brain activity so that researchers could determine mental workload.

Using established research protocols borrowed from aviation psychology and a variety of performance metrics, drivers engaged in common tasks, from listening to an audio book or talking on the phone to listening and responding to voice-activated emails while behind the wheel.

— Tasks such as listening to the radio ranked as a category “1” level of distraction or a minimal risk.

— Talking on a cell-phone, both handheld and hands-free, resulted in a “2” or a moderate risk.

— Listening and responding to in-vehicle, voice-activated email features increased mental workload and distraction levels of the drivers to a “3” rating or one of extensive risk.

“These findings reinforce previous research that hands-free is not risk-free,” said AAA Foundation President and CEO Peter Kissinger. “Increased mental workload and cognitive distractions can lead to a type of tunnel vision or inattention blindness where motorists don’t see potential hazards right in front of them.”

Based on this research, AAA urges the automotive and electronics industries to join us in exploring:

— Limiting use of voice-activated technology to core driving-related activities such as climate control, windshield wipers and cruise control, and to ensure these applications do not lead to increased safety risk due to mental distraction while the car is moving.

— Disabling certain functionalities of voice-to-text technologies such as using social media or interacting with e-mail and text messages so that they are inoperable while the vehicle is in motion.

— Educating vehicle owners and mobile device users about the responsible use and safety risks for in-vehicle technologies.

AAA also is using the findings to promote dialogue with policy makers, safety advocates and industry to ensure that these emerging in-vehicle technologies won’t lead to unintentional compromises in public safety.  As part of this effort, AAA has already met with safety advocates and provided copies of the report to CEOs of all major U.S. automakers.

“This study constitutes the most in-depth analysis to date of mental distractions behind the wheel.  AAA is hopeful that it will serve as a stepping stone toward working in collaboration with automakers to promote our shared goal of improving safety for all drivers,” said Darbelnet. “Specifically, these increasingly common voice-driven, in-vehicle technologies should be limited to use for just core driving tasks unless the activity results in no significant driver distraction.”

Established by AAA in 1947, the AAA Foundation for Traffic Safety is a 501(c) (3) not-for-profit, publicly-supported charitable educational and research organization. Dedicated to saving lives and reducing injuries on our roads, the foundation’s mission is to prevent crashes and save lives through research and education about traffic safety. The foundation has funded over 200 research projects designed to discover the causes of traffic crashes, prevent them, and minimize injuries when they do occur.  Visit www.aaafoundation.org for more information on this and other research.

As North America’s largest motoring and leisure travel organization, AAA provides more than 53 million members with travel, insurance, financial and automotive-related services. Since its founding in 1902, the not-for-profit, fully tax-paying AAA has been a leader and advocate for the safety and security of all travelers. AAA clubs can be visited on the Internet at AAA.com.