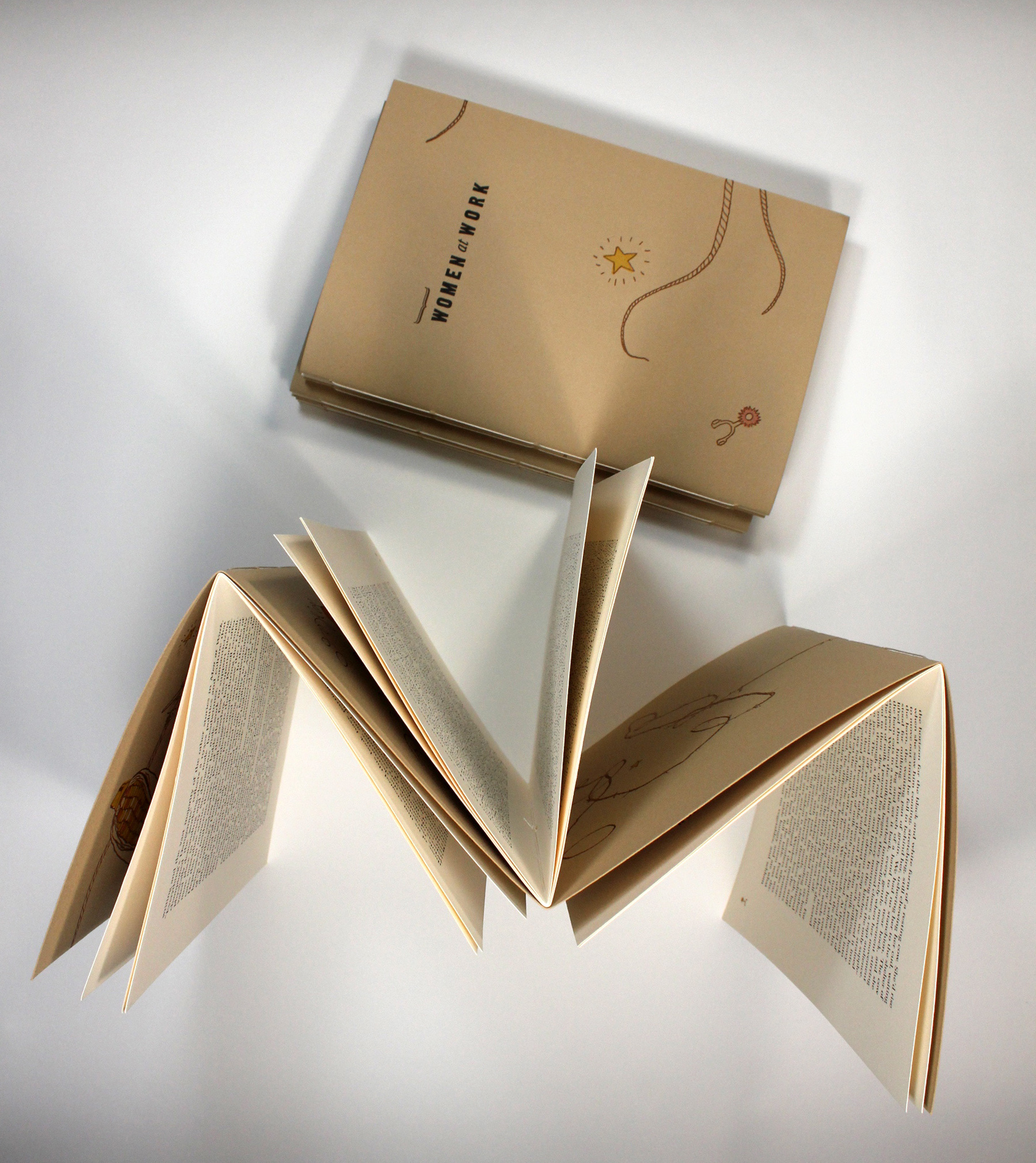 April 4, 2012 – As the appetite for ever-smaller and ever-faster electronic devices grows, so has interest in vintage and locally-produced items, such as books made of paper—and mostly by hand.

As a premier example, the first imprint of the University of Utah’s growing Book Arts Program—Wo/Men at Work—is now off the presses and available for purchase from Red Butte Press. The limited-edition, hand-crafted work is notable not only for how it was produced, but for its content, through which the creators aimed to explore the nature of work and what it says about a person’s sense of self and place in society.

The book captures two vignettes of American labor, each story set in Montana in the middle of the 20th century. One, Ralph Powell’s “Everything’s Dangerous,” describes the life of cowboys who choose to perform in rodeos, reflecting both the economics of the time as well as the cowboy’s pride in his multi-faceted skills. The story was written in 1941 as part of a Federal Writers Project but not published until now. On the literal flip side of the book is a contemporary essay, “Cooking from Scratch,” composed for the book by writer Judy Blunt, author of the 2002 memoir Breaking Clean. Blunt writes about growing up on a Montana ranch in the 1950s and explores the notion of “women’s work” in the context of running a ranch as well as how that upbringing influences her—and her family members—today.

Original artwork was also created for the book and responds to the essays inside. The drawings span multiple panels of the cover, and when folded, weave through and illustrate each of the stories.

The book project was initiated by Matthew Basso, faculty member and director of the U’s American West Center, and produced by an interdisciplinary team of graduate students and Book Arts Program staff, directed by Marnie Powers-Torrey, Program managing director.

The unique, 32-page, W-fold pamphlet is printed on Rives Heavyweight and BFK papers, and is an amalgamation of modern and antiquated letterpress methods. Each sheet was hand cranked over inked forms by a single operator. Each page was cut, printed, folded, and sewn together by hand. But the pamphlet was designed using the latest publishing software, which allowed maximum design flexibility including the use of typefaces evocative of the period without having to acquire and store metal type.

“Why the renewed interest in the antiquated one-off or limited-edition book in this age of the Amazon Kindle or the iPad?” Basso asks in the introduction. “Perhaps this is reflective of a cultural desire to resituate the sacredness of the crafted object just as its status and physicality is being degraded and confused by the rapid advancement of textual technologies.”

In her essay, Blunt echoes something similar about cultural change and constancy. After cooking her now grown son a from-scratch breakfast, she asserts that “As a ranch kid I learned about this sort of thing, the rules that go with mothers and food.”

ABOUT THE BOOK ARTS PROGRAM

The J. Willard Marriott Library is the flagship academic library for the Utah State System of Higher Education and the largest state-­funded academic library in the six-­state region of Idaho, Montana, Nevada, New Mexico, Utah, and Wyoming. As the primary service hub and destination for students, the Marriott Library is integral to the teaching, research, and public life missions of the University of Utah. The library’s mission is to inspire the creation, discovery, and use of knowledge for Utah and the world. Library holdings include 3 million volumes and nearly 200 unique digital collections containing countless photographs, maps, books, audio recordings, newspaper articles, and other items. Important collections span Utah, the Mormons, and the West to extensive science, engineering, medical, and legal archives. The library also holds more than 1 million historical photographs and extensive film collections.