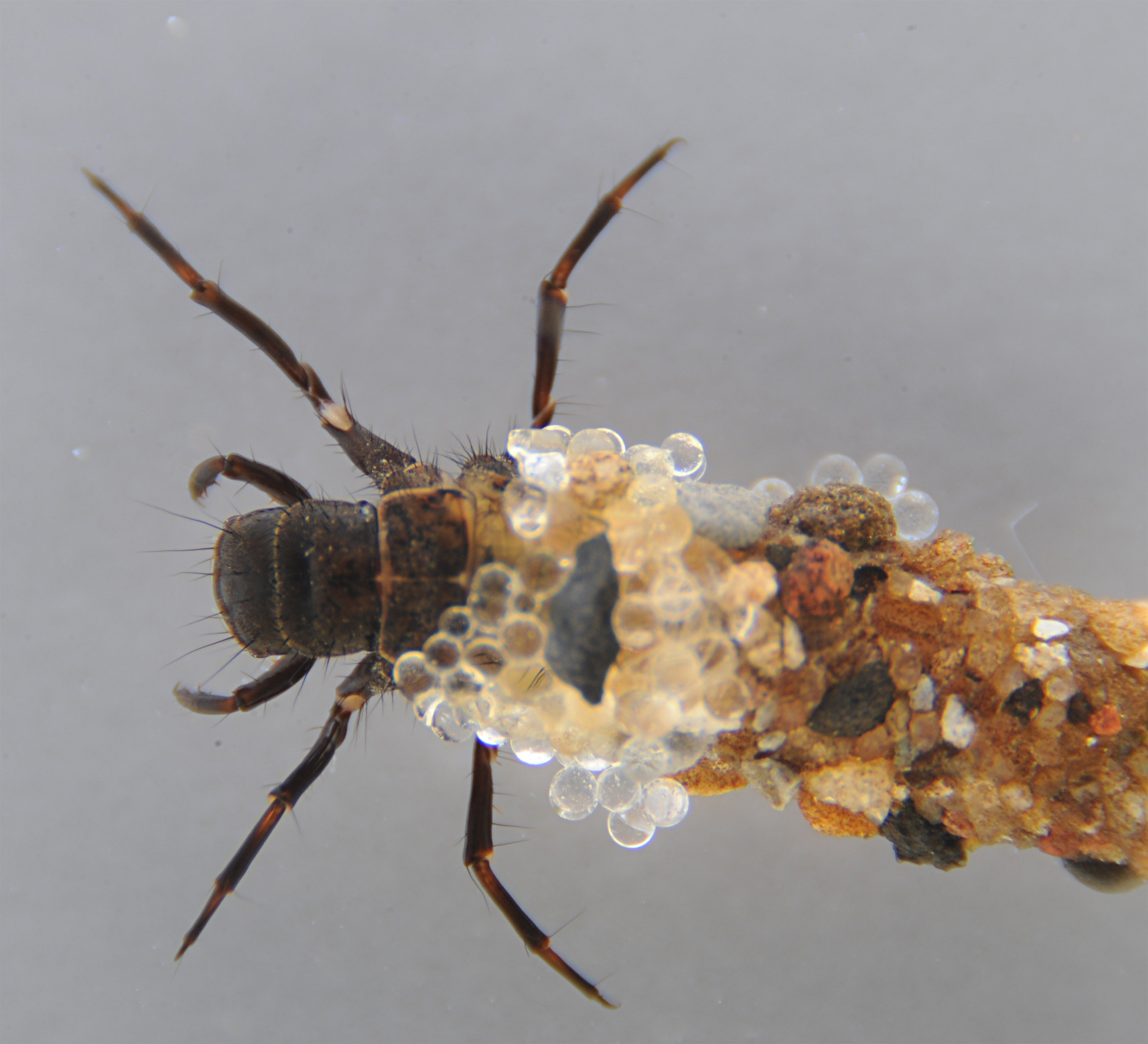 Mar. 1, 2010 – Like silkworm moths, butterflies and spiders, caddisfly larvae spin silk, but they do so underwater instead on dry land. Now, University of Utah researchers have discovered why the fly’s silk is sticky when wet and how that may make it valuable as an adhesive tape during surgery.

“Silk from caddisfly larvae – known to western fly fishermen as ‘rock rollers’ – may be useful some day as a medical bioadhesive for sticking to wet tissues,” says Russell Stewart, an associate professor of bioengineering and principal author of a new study of the fly silk’s chemical and structural properties.

“I picture it as sort of a wet Band-Aid, maybe used internally in surgery – like using a piece of tape to close an incision as opposed to sutures,” he adds. “Gluing things together underwater is not easy. Have you ever tried to put a Band-Aid on in the shower? This insect has been doing this for 150 million to 200 million years.”

The new study, funded by the National Science Foundation, is set for publication this week in Biomacromolecules, a journal of the American Chemical Society.

There are thousands of caddisfly species worldwide in an order of insects named Trichoptera that are related to Lepidoptera, the order that includes moths and butterflies that spin dry silk. Because caddisflies are eaten by trout, fly fishermen use caddisfly lures. Some species spend their larval stages developing underwater, and build an inch-long, tube-shaped case or shelter around themselves using sticky silk and grains of rock or sand. Other species use silk, small sticks and pieces of leaves.

Each larva has a head and four legs that stick out from the tube. The larval case often is conical because it gets wider as the larva grows. A caddisfly larva eventually pupates, sealing off the tube as it develops into an adult fly and then hatches.

Aquatic caddisflies and terrestrial butterflies and moths diverged from a common silk-spinning ancestor some 150 million to 200 million years ago. Caddisflies now live around the world in waters ranging from fast streams to quiet marshes.

“The caddisflies’ successful penetration into diverse aquatic habitats is largely due to the inventive use by their larva of underwater silk to build elaborate structures for protection and food gathering,” the new study says.

Caddisflies fall into subgroups. Brachycentrus echo, the species Stewart studied, is one of the casemakers, which build their case and then drag it along with them underwater as they forage for food. Some caddisfly larva are retreatmakers, which build a stationary dome-shaped shelter glued to a rock, with a silk net to catch passing food.

Stewart studies natural adhesives, including glue produced in intertidal ocean waters by the sandcastle worm. It has potential as glue for repairing small broken bones.

He got interested in caddisfly larva adhesive silk tape after he was contacted by a Smithsonian Institution scientist who showed him several of the tube-shaped larval cases.

“We looked inside a case through a microscope and saw these silk struts between the rocks and realized this is really interesting,” he says. “So I came home and put on my fly fishing boots and started wandering mountain streams looking for caddisfly larvae.”

Stewart and study co-author Ching Shuen Wang – who works in Stewart’s lab – studied the caddisfly species B. echo from the lower Provo River about an hour south of Salt Lake City. Bioengineering undergraduate student Nick Ashton gathered the fly larvae and figured out how to keep them alive in the lab.

“There’s just a fascinating diversity of these insects. Their adhesive is able to bond to a wide range of surfaces underwater: soft and hard, organic and inorganic. If we could copy this adhesive it would be useful on a wide range of tissue types.”

Caddisfly larvae extrude adhesive silk ribbon out of an organ known as the spinneret. The products of two silk glands converge there, so the extruded adhesive looks like a double ribbon with a seam the long way. The larvae weave this sticky mesh back and forth around sand grains, sticks or leaf pieces to create the tubes they occupy.

Stewart and colleagues grew caddisfly larvae in aquariums, but with glass beads instead of the sand and rock grains found in streams. The larvae expanded their rock cases using the beads, which were glued together from the inside by wet silk ribbons.

The researchers broke off some beads to obtain clean samples of silk. They analyzed the silk using several methods, including scanning electron microscopy, which showed how silk fibers stitched together the glass beads from inside of the shelter case.

“It’s like using Scotch tape on the inside of a box to hold it together,” Stewart says. “It’s really like a tape more than anything else – a tape that works underwater.”

Stewart hasn’t studied the strength of the caddisfly silk, but plans to do so.

“Individual threads aren’t very strong, but it lays down dozens of them. If we can copy this material and make tape out of it, the bond strength would go up dramatically.”

The Chemistry and Structure of Wet Silk from Caddisflies

Stewart’s study included detailed analysis of the chemistry and structure of the caddisfly silk, showing how it is similar to what silkworm moths produce for use in textiles and even to spider web silk, but with adaptations that make it work underwater.

Stewart says his goal was to characterize the adhesive silk fiber “for the purpose of trying to copy it” so a synthetic version can be used as a surgical adhesive.

He found the caddisfly silk is a fiber made of large proteins named fibroin (fye-bro-in) with an amino acid named serine making up a fifth of the amino acids in fibroin.

“Phosphates are well-known adhesion promoters used in dental fixtures such as crowns or fillings,” says Stewart. “They are also in latex paints that are water-based, and the phosphates increase the adhesion of those paints. The paint industry discovered this fairly recently. Caddisflies have been doing this for at least 150 million years.”

“Imagine those chains aligned side-by-side, but staggered so the pluses and minuses are lined up, which then forms silk fibers with lots and lots of these protein chains in one fiber,” Stewart says. “You wouldn’t be able to make shirts out of it, but you might be able to make wet Band-Aids.”

Stewart made a counterintuitive finding about how wet silks are made. “These fibroin proteins that make up the silks are water-soluble because of the electrical charges. Ironically – and this is our hypothesis for now – the association of those plus or minus charges makes them water-insoluble. This is how you make a silk fiber under water.”

Stewart says caddisfly silk and sandcastle worm glue are similar: their proteins are heavily phosphorylated and have a large number of positively charged amino acids.

He says the ability to make adhesives underwater now has been identified in four phyla – major categories of living organisms – that include caddisflies, sandcastle worms, mussels and sea cucumbers.

“They came to this underwater adhesion solution completely independently,” showing that it repeatedly evolved because of its value in helping the creatures live and thrive, Stewart says.

For information of the University of Utah College of Engineering, see: http://www.coe.utah.edu