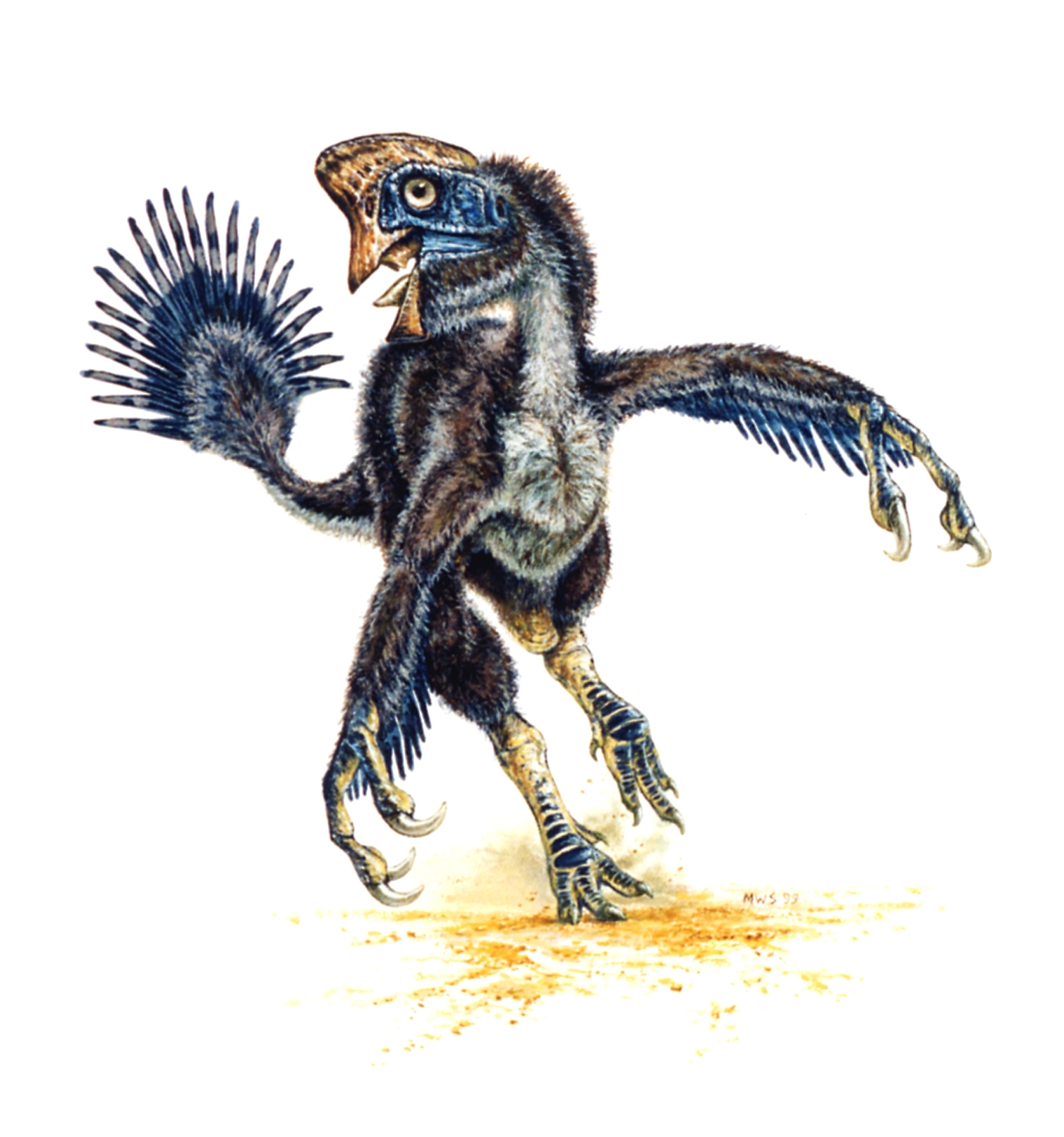 April 3, 2006 — Scientists from the University of Utah and the Utah Museum of Natural History have discovered the remains of a new bird-like, meat-eating dinosaur in Grand Staircase-Escalante National Monument (GSENM), southern Utah. Although represented only by the fossilized remains of hand and foot bones, comparisons with more complete skeletons found in Asia demonstrate that this animal was about seven feet tall when standing upright. Discovery of this Utah giant, which is much larger than its counterparts in Canada and the northern US, nearly doubles the documented range of these dinosaurs in North America, and demonstrates that they roamed much farther south than previously thought. A scientific paper naming and describing this animal, and published in the latest issue of the Journal of Vertebrate Paleontology, was authored by Lindsay Zanno, a graduate student in the Department of Geology and Geophysics, and Scott Sampson, chief curator at the Utah Museum of Natural History (UMNH), and associate professor in the Department of Geology and Geophysics.

The new dinosaur, formally dubbed Hagryphus giganteus, which means “giant four-footed, bird-like god of the western desert” in reference to the animal’s outward resemblance to a large land bird, its giant stature, and its discovery in the Utah desert. Hagryphus is a member of the oviraptorosaurs, a group of bird-like feathered dinosaurs with toothless beaks, powerful arms and formidable claws. These enigmatic animals are thought by some paleontologists to have been omnivorous, feeding on a mixture of meat and plants. Although only the hands and feet of Hagryphus are known, the scientists were able to use the animal”s close relatives to estimate the size of the skeleton. The researchers say they do not know why this dinosaur was so much larger than its northern cousins but speculate that it may have been related to different environmental conditions in the south.

The most spectacular finds of oviraptorosaur dinosaurs are fossilized skeletons from the Gobi desert in Mongolia. These dinosaurs were named oviraptors, meaning “egg-thief,” because their remains were discovered in close association with nests of dinosaur eggs, and it was thought that the raptors were eating the egg contents. In more recent years, however, eggs have been found with remains of baby oviraptors inside. And the adult oviraptors turn out to have been sitting on the nests, brooding the eggs just as birds do today. Thus, it appears that the adult oviraptors were protecting the embryos rather than devouring them! Nevertheless, the name has stuck.

Oviraptorsaurs are known from a large portion of Asia but were thought to have invaded only the northern portion North America, since previous examples were known only from Montana, South Dakota, and Alberta, Canada. Discovery of Hagryphus in southern Utah demonstrates that this group of dinosaurs was much more widespread, living across much of the western United States. Hagryphus lived in a time of global warming, which melted polar caps and produced exceptionally high sea levels. As a result, the central portion of North America was flooded, isolating the eastern and western portions of the continent. The dinosaurs preserved in GSENM were stranded on the western landmass, which formed a narrow peninsula. The relationships between northern and southern dinosaurs that occupied this western landmass during the Late Cretaceous are part of a long-term research project undertaken by University of Utah scientists.

Hagryphus is the first new dinosaur to be named from GSENM, and just one of many exciting finds made during a five-year collaborative project between the Monument and the University of Utah. The primary goal of this project, funded by GSENM, has been to conduct paleontological surveys and to excavate the fossils of dinosaurs and other lifeforms that existed in this region during a period near the end of the Age of Dinosaurs. More specifically, the focus of this work has been the Kaiparowits Formation, which dates to a time near the end of the Cretaceous, between 76 and 74 million years ago. Over the past five years, GSENM and University of Utah and researchers, including dozens of students and volunteers, have spent almost 17 months conducting field work within the Monument boundaries.

GSENM encompasses 1.9 million acres, comprising a substantial portion of southern Utah. Sampson states that, “due to the extremely rugged nature of the terrain, this region was the last major area within the lower 48 states to be formally mapped. For the same reason, it now represents an untapped and perhaps the last major dinosaur graveyard in this country to be explored.” The central region of the Monument, known as the Kaiparowits Plateau, preserves one the most complete records of Cretaceous life anywhere in the world. However, access to the remote back country must be accomplished almost entirely on foot, and fossils must either be carried out under human power or, if the specimen involves a large dinosaur skeleton, via helicopter. Thus far, project teams have prospected approximately 20,000 acres of the central Kaiparowits Plateau in the search for dinosaurs and their prehistoric contemporaries. Yet this area amounts to less than 5% of the Cretaceous, fossil-bearing rocks preserved in the Monument.

To date, the results of this collaborative project have been spectacular. In addition to Hagryphus, discoveries include at least three other previously unknown kinds of dinosaurs-including a meat-eating tyrannosaur, a duckbilled dinosaur, and a horned dinosaur-all of which are under study and will be formally named in the near future. Remarkably, virtually every dinosaur species identified to date has turned out to be new to science. Many of the fossils from the Monument were buried quickly in sandy rivers and are exceptionally preserved. Several duckbill dinosaurs even retain fossilized skin impressions, which are very rare finds anywhere in the world. One bony claw of Hagryphus preserves the impression of the keratinous fingernail-like that would have covered the claw in life (see image CD). In addition to the charismatic dinosaur “megafauna,” fossil finds from GSENM include abundant remains of clams, fishes, amphibians, lizards, turtles, birds, crocodiles, and mammals.

Project investigators, aided by workers at several other US institutions, are currently researching this bounty of prehistoric life forms, as well as their geologic context, in an effort to reconstruct this 75 million year old ecosystem. Project findings, including many original fossils, will be featured in an entirely new UMNH facility, scheduled to open at the end of 2009. Meanwhile, Hagryphus and many other Monument fossils can be viewed on display at the current UMNH building on Presidents Circle at the University of Utah campus, as well as in the GSENM visitor’s center in Big Water, Utah.