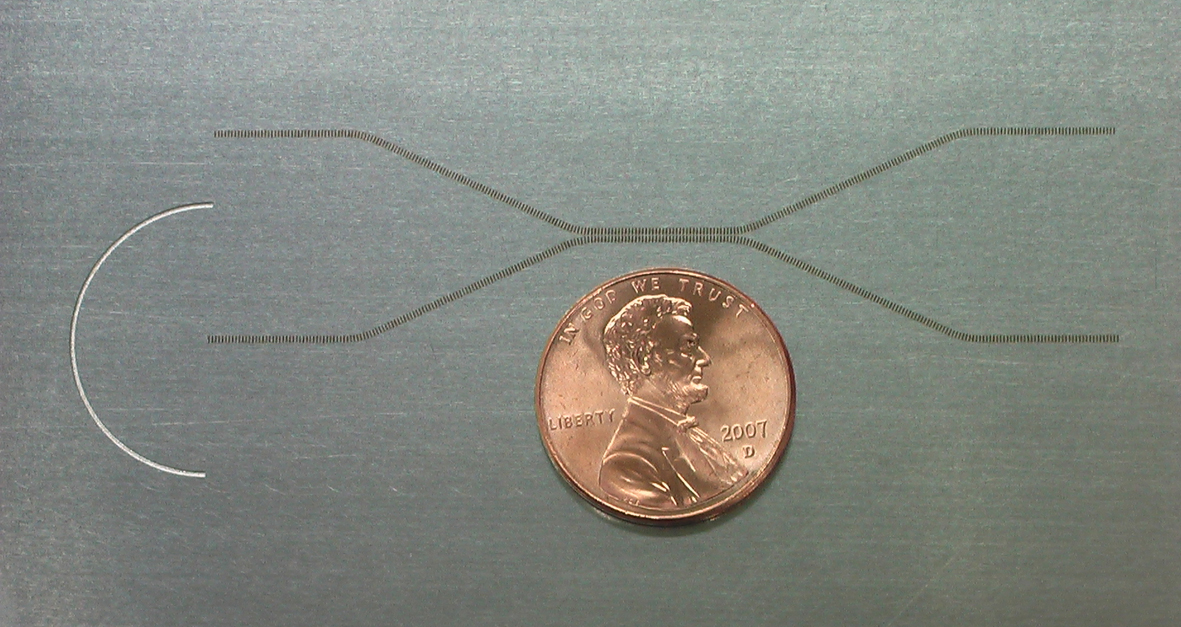 April 15, 2008 – University of Utah engineers took an early step toward building superfast computers that run on far-infrared light instead of electricity: They made the equivalent of wires that carried and bent this form of light, also known as terahertz radiation, which is the last unexploited portion of the electromagnetic spectrum.

“We have taken a first step to making circuits that can harness or guide terahertz radiation,” says Ajay Nahata, study leader and associate professor of electrical and computer engineering. “Eventually – in a minimum of 10 years – this will allow the development of superfast circuits, computers and communications.”

Electricity is carried through metal wires. Light used for communication is transmitted through fiberoptic cables and split into different colors or “channels” of information using devices called waveguides. In a study to be published Friday, April 18 in the online journal Optics Express, Nahata and colleagues report they designed stainless steel foil sheets with patterns of perforations that successfully served as wire-like waveguides to transmit, bend, split or combine terahertz radiation.

“A waveguide is something that allows you to transport electromagnetic radiation from one point to another point, or distribute it across a circuit,” Nahata says.

If terahertz radiation is to be used in computing and communication, it not only must be transmitted from one device to another, “but you have to process it,” he adds. “This is where terahertz circuits are important. The long-term goal is to develop capabilities to create circuits that run faster than modern-day electronic circuits so we can have faster computers and faster data transfer via the Internet.”

Fiberoptic phone and data lines now use near-infrared light and some visible light. The only part of the spectrum not now used for communications or other practical purposes is terahertz-frequency or far-infrared radiation – also nicknamed T-rays – located on the spectrum between mid-infrared and microwaves.

With so much of the spectrum clogged by existing communications, engineers would like to harness terahertz frequencies for communication, much faster computing and even for anti-terrorism scanners and sensors able to detect biological, chemical or other weapons. Nahata says the new study is relevant mainly to computers that would use terahertz radiation to run at speeds much faster than current computers.

In March 2007, Nahata, Agrawal and others published a study in the journal Nature showing it was possible to control a signal of terahertz radiation using thin stainless steel foils perforated with round holes arranged in semi-regular patterns.

This February, British researchers reported they used computer simulations and some experiments to show that indentations punched across an entire sheet of copper-clad polymer could hold terahertz radiation close to the sheet’s surface. That led them to conclude the far-infrared light could be guided along such a material’s surface.

But the London researchers did not actually manipulate the direction the terahertz radiation moved, such as by bending or splitting it.

“We have demonstrated the ability to do this, which is a necessary requirement for making terahertz guided-wave circuits,” Nahata says.

Circuits: From Electrical to Optical to Terahertz

Wires act as waveguides for electricity. Wires connect active devices such as transistors, which switch or adjust the electric signal. That is the basis for how computers work today. An electronic integrated circuit is a computer processor made of wires, transistors, resistors and capacitors on a semiconductor chip made of silicon.

In optical communications, the waveguides carry laser-generated light in fiberoptic cables and lines etched or deposited on an insulator or semiconductor surface. Nahata says photonic integrated circuits now are used for phone and Internet communications, mainly for combining or “multiplexing” different colors or channels of light entering a fiberoptic cable and separating or “demultiplexing” the different wavelengths exiting the cable.

“Electronic circuits today work at gigahertz frequencies – billions of cycles per second. Electronic devices like a computer chip can operate at gigahertz,” Nahata says. “What people would like to do is develop capabilities to transport and manipulate data at terahertz frequencies [trillions of hertz]. It’s a speed issue. People want to be able to transfer data at higher speeds. People would like to download a movie in a few seconds.”

“In this study, we’ve demonstrated the first step toward making circuits that use terahertz radiation and ultimately might work at terahertz speeds,” or a thousand times faster than today’s gigahertz-speed computers, Nahata says.

“People have been working on terahertz waveguides for a decade,” he says. “We’ve shown how to make these waveguides on a flat surface so that you can make circuits just like electronic circuits on silicon chips.”

The researchers used pieces of stainless steel foil about 4 inches long, 1 inch wide and 625 microns thick, or 6.25 times the thickness of a human hair. They perforated the metal with rectangular holes, each measuring 500 microns (five human hair widths) by 50 microns (a half a hair width). The rectangular holes were arranged side by side in three different patterns to form “wires” for terahertz radiation:

“All we’ve done is made the wires” for terahertz circuits, Nahata says. “Now the issue is how do we make devices [such as switches, transistors and modulators] at terahertz frequencies?”

The design of the waveguide means that it carries terahertz radiation in the form of surface plasma waves – also known as plasmons or plasmon polaritons – which are analogous to electrons in electrical devices or photons of light in optical devices. The surface plasma waves are waves of electromagnetic radiation at a terahertz frequency that are bound to the surface of the steel foil because they are interacting with moving electrons in the metal, Nahata says.

Nahata’s department is part of the University of Utah’s College of Engineering, which has six academic departments plus a School of Computing, with a total of 130 full-time faculty members, 2,047 undergraduate students and 812 graduate students.