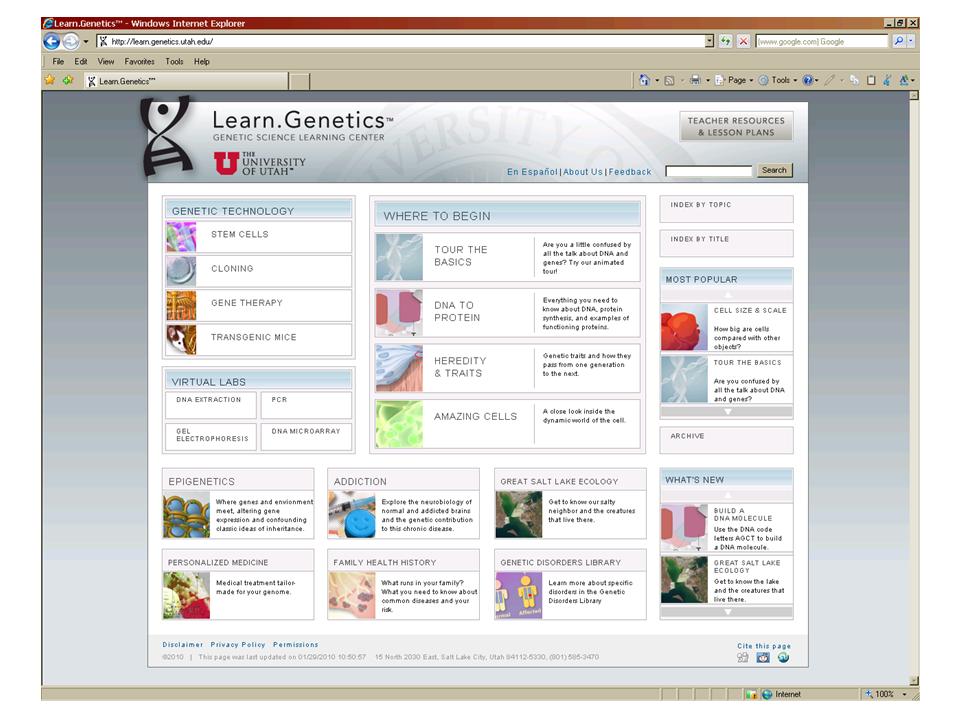 January 29, 2010 – The University of Utah Genetic Science Learning Center Web sites that have brought millions of viewers fascinating animations of the size and scale of cells, drug-addicted mice, and other captivating lessons in genetics, have been honored by the journal Science with the first Science Prize for Online Resources in Education (SPORE) Award.

The Web sites, one for students and others to learn about genetics (http://learn.genetics.utah.edu/) and another for science teachers (http://teach.genetics.utah.edu), provide information about everything from DNA to stem cells to the genetics of drug addiction in a way that is understandable, relevant, and entertaining. The Web sites were nominated for the SPORE Award by high school science teachers from various areas of the country. After two rounds of judging against other Web sites, the Genetic Science Learning Center’s sites were chosen as the winners.

Louisa A. Stark, Ph.D., director of the Genetic Science Learning Center, said receiving the first SPORE Award is a special honor, made even more so because the Web sites were nominated by teachers. “They are the gatekeepers to the classroom, so we’re very honored when they say our Web sites are worthy of this award.”

In an essay published Jan. 22 in Science, Stark and the center’s associate director Kevin Pompei, say the explosion in genetic knowledge has led to advancements in personalized medicine, stem cell treatments, and genetic testing. But these advancements mean the public must be prepared to make informed decisions regarding genomic-related health care, research, and even genetically modified foods. “Our goal in developing these Web sites has been to make genetics and genomics easy for everyone to understand,” they write.

Stark and Pompei were asked to pen the essay to describe the vision and philosophy that drive the Web sites’ content.

Science is published by the American Association for the Advancement of Science (AAAS), which was founded in 1848 and is the world’s largest general scientific society. Monica Bradford, executive editor of Science, said the journal was “thrilled with the quality of educational resources” developed by the Genetic Science Learning Center staff.

The Genetic Science Learning Center Web sites have been honored before. In 2003 and 2004 Scientific American named the center’s main Web site, http://learn.genetics.utah.edu, one of the top 50 Internet sites.

This past fall, an interactive animation on the center’s Web sites, “Cell Size and Scale,” went viral on the Internet, generating 270 hits a second and becoming linked to more than 20,000 other Web sites. The animation features a zoom function that allows viewers to see the relative size of things ranging from a coffee bean to the flu virus to a carbon atom. At one point, the animation was receiving more hits than the Facebook homepage.

Another feature of the Web sites, “Using Family History to Improve Health,” was featured in the Gene Screen movie festival sponsored by the Genetic Alliance, an international advocacy group committed to transforming health through genetics, according to the groups’ Web site.

The Genetic Science Learning Center is part of the U of U’s Department of Human Genetics. Department chair Lynn B. Jorde, Ph.D., lauded Stark and her staff for bringing credit to the University and the center. “It’s very important that we educate the general public about human genetics and about science in general,” Jorde said. “Louisa Stark and the Genetic Science Learning Center staff are internationally recognized leaders in this effort. This award is very well deserved.”

The center has a staff of 12, who have a unique combination of science degrees, elementary- and secondary-level teaching experience, and technology expertise. All of the Web sites’ features are produced in-house. In designing the sites, the center draws on science teachers from inner city, rural, and urban areas nationwide.

Currently, more than 1 million visitors a month are visiting the Web sites’ 500 pages, according to Stark. This translates to more than 50,000 visitors per day and 250,000 page views on peak days.