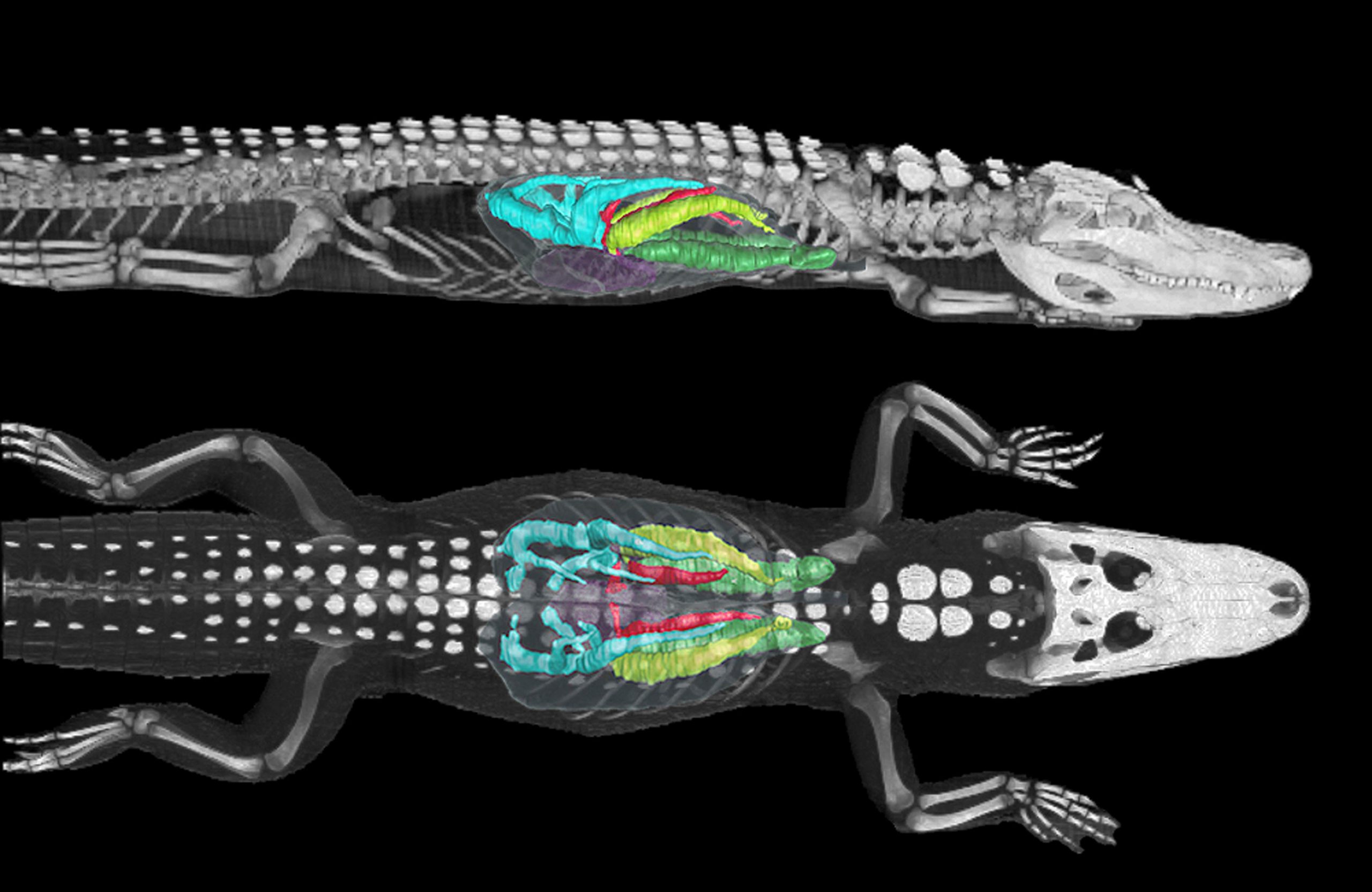 Jan. 14, 2010 – University of Utah scientists discovered that air flows in one direction as it loops through the lungs of alligators, just as it does in birds. The study suggests this breathing method may have helped the dinosaurs’ ancestors dominate Earth after the planet’s worst mass extinction 251 million years ago.

Before and until about 20 million years after the extinction – called “the Great Dying” or the Permian-Triassic extinction – mammal-like reptiles known as synapsids were the largest land animals on Earth.

The extinction killed 70 percent of land life and 96 percent of sea life. As the planet recovered during the next 20 million years, archosaurs (Greek for “ruling lizards”) became Earth’s dominant land animals. They evolved into two major branches on the tree of life: crocodilians, or ancestors of crocodiles and alligators, and a branch that produced flying pterosaurs, dinosaurs and eventually birds, which technically are archosaurs.

By demonstrating one-way or “unidirectional” airflow within the lungs of alligators, the new study – published in the Friday, Jan. 15 issue of the journal Science – means that such a breathing pattern likely evolved before 246 million years ago, when crocodilians split from the branch of the archosaur family tree that led to pterosaurs, dinosaurs and birds.

That, in turn, means one-way airflow evolved in archosaurs earlier than once thought, and may explain why those animals came to dominance in the Early Triassic Period, after the extinction and when the recovering ecosystem was warm and dry, with oxygen levels perhaps as low as 12 percent of the air compared with 21 percent today.

“The real importance of this air-flow discovery in gators is it may explain the turnover in fauna between the Permian and the Triassic, with the synapsids losing their dominance and being supplanted by these archosaurs,” says C.G. Farmer, the study’s principal author and an assistant professor of biology at the University of Utah. “That’s the major reason this is important scientifically.”

Even with much less oxygen in the atmosphere, “many archosaurs, such as pterosaurs, apparently were capable of sustaining vigorous exercise,” she adds. “Lung design may have played a key role in this capacity because the lung is the first step in the cascade of oxygen from the atmosphere to the animal’s tissues, where it is used to burn fuel for energy.”

Farmer emphasized the discovery does not explain why dinosaurs, which first arose roughly 230 million years ago, eventually outcompeted other archosaurs.

Farmer conducted the study – funded by the National Science Foundation – with Kent Sanders, an associate professor of radiology at the University of Utah School of Medicine. They performed CT scans of a 4-foot-long, 24-pound alligator.

‘The Great Dying’ – Decline of the Synapsids, Rise of the Archosaurs

The synapsids – which technically include modern mammals – occupied ecological niches for large animals before the Permian-Triassic extinction.

“Some got up to be bear-sized,” says Farmer. Some were meat-eaters, others ate plants. They were four-footed and had features suggesting they were endurance runners. Their limbs were directly under their body instead of sprawling outward like a lizard’s legs. There is evidence they cared for their young.

The cause of the mass extinction 251 million years ago is unknown; theories include massive volcanism, an asteroid hitting Earth and upwelling of methane gas that had been frozen in seafloor ice.

“A few of the synapsids survived the mass extinction to re-establish their dominance in the early Triassic, and the lineage eventually gave rise to mammals in the Late Triassic,” says Farmer. “However, the recovery of life in the aftermath of the extinction involved a gradual turnover of the dominant terrestrial vertebrate lineage, with the archosaurs supplanting the synapsids by the Late Triassic.”

From then until the dinosaurs died out 65 million years ago, any land animal longer than about 3 feet was an archosaur, says Farmer, while mammal-like synapsid survivors “were teeny little things hiding in cracks. It was not until the die-off of the large dinosaurs 65 million years ago that mammals made a comeback and started occupying body sizes larger than an opossum.”

No one knows much about the archosaur that was the common ancestor of crocodilians and of pterosaurs, dinosaurs and birds, Farmer says.

“Our data provide evidence that unidirectional flow [of air in the lungs] predates the origin of pterosaurs, dinosaurs and birds, and evolved in the common ancestor of the crocodilian and bird [and pterosaur and dinosaur] lineages,” Farmer says.

Cul-de-sacs or Loops for Airflow

In the lungs of humans and other mammals, airflow is like the tides. When we inhale, the air moves through numerous tiers of progressively smaller, branching airways, or bronchi, until dead-ending in the smallest chambers, cul-de-sacs named alveoli, where oxygen enters the blood and carbon dioxide moves from the blood into the lungs.

It long has been known that airflow in birds is unidirectional, and some scientists suggest it also was that way in dinosaurs.

In modern birds, the lungs’ gas exchange units are not alveoli, but tubes known as “parabronchi,” through which air flows in one direction before exiting the lung. Farmer says this lung design helps birds fly at altitudes that would “render mammals comatose.”

Some researchers have argued that unidirectional airflow evolved after crocodilians split from the archosaur family tree, arising among pterosaurs and theropod dinosaurs, the primarily meat-eating group that included Tyrannosaurus rex. Others have argued it arose only among coelurosaurs, a group of dinosaurs that also includes T. rex and feathered dinosaurs.

Unidirectional air flow in birds long has been attributed to air sacs in the lungs. But Farmer disagrees, since gators don’t have air sacs, and says it’s due to aerodynamic “valves” within the lungs. She believes air sacs help birds redistribute weight to control their pitch and roll during flight. Farmer says many scientists simply assume air sacs are needed for unidirectional airflow, and have pooh-poohed assertions to the contrary.

“They cannot argue with this data,” she says. “I have three lines of evidence. If they don’t believe it, they need to get an alligator and make their own measurements.”

Farmer says the fact gator lungs still had unidirectional flow after being removed shows unidirectional airflow is caused by aerodynamic valves within the lungs, and not by some other factor, like air sacs or the liver, which acts like a piston to aid breathing.

How does air loop through an alligator’s multichambered lungs?

From those primary airways, the bronchi then branch into a second tier of narrower airways. Inflowing air jets past or bypasses the first branch in each lung because the branch makes a hairpin turn away from the direction of airflow, creating an aerodynamic valve. Instead, the air flows into other second-tier bronchi and then into numerous, tiny, third-tier airways named parabronchi, where oxygen enters the blood and carbon dioxide leaves it.

The air, still moving in one direction, then flows from the parabronchi into the bypassed second-tier bronchi and back to the first-tier bronchi, completing a one-way loop through the lungs before being exhaled through the windpipe.