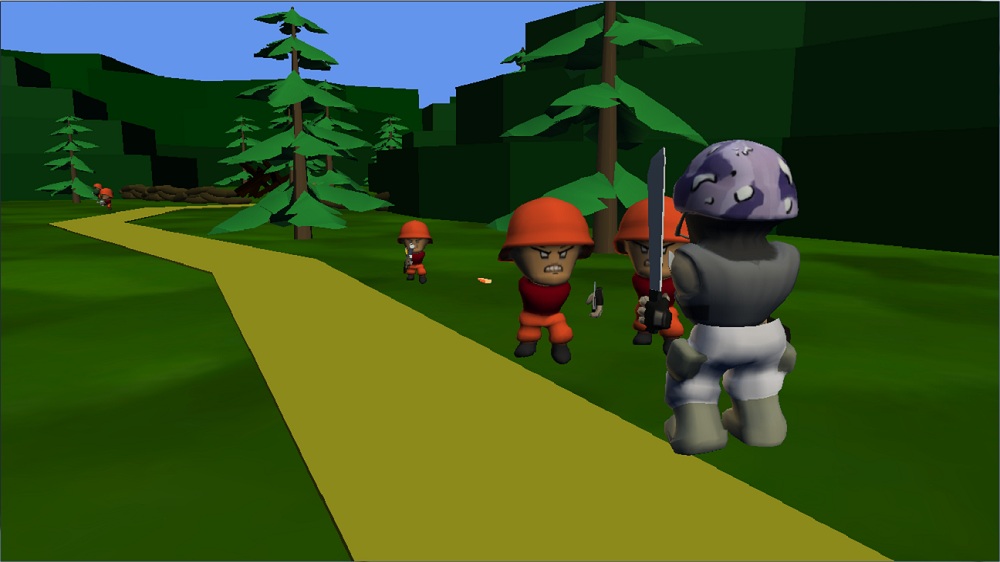 June 13, 2011 — A little over a month after graduation, and already 30 University of Utah (the U) students may be poised to recoup their tuition costs–and then some. For the first time ever, all three student projects from one of the U’s computer game development classes have been accepted for sale on Xbox Live Indie Games (XBLIG), an online computer game store for the Xbox 360 console.

This means that all students who developed those games as their “capstone” senior projects will collect money for the sales from now on. One project, “Minions!,” already has sold over 10,000 downloads.

“This is quite an honor for the students and the program,” says Roger Altizer, one of the course instructors and an adjunct assistant professor in the U’s Department of Film and Media Arts. “We’ve had games rejected in the past, so having all three succeed is amazing.”

FROM CODE TO CONSOLE

Over the course of the 2010-11 academic year, students developed three video games –”Minions!,” “The Last Podfighter,” and “Mr. Gravity” – as part of the Entertainment Arts and Engineering’s (EAE) senior capstone course, required for all undergraduates who are completing a major in computer science or film studies with an EAE emphasis. Students created everything from the basic concept, test and final versions of the game to animation and even original background music.

At the beginning of the course, every student was required to come up with an original game concept and pitch it to their classmates and professors. The class then voted, and the top 12 concepts were determined, refined and polished by small groups of students, then presented for a final vote. Three were chosen by the course instructors, after consideration of the students’ votes and consultation with industry professionals.

The students were next arranged into teams of ten each to develop the games. Every team was given instruction as to how to manage the scheduling and tasks of their project using specific software and communicating on a blog.

After the second semester, each game was completed and the students got a chance to showcase their work at an event called EAE Day. They also presented the games to industry professionals at Electronic Arts and Disney Interactive Studios, two game development giants in the area.

“The pitching of the game to professionals was a very good learning mechanism,” says James Brinkerhoff, one of two project leaders and scrum master on “The Last Podfighter.” The scrum master assures that all tasks are completed and developed according to schedule. “The experience was exactly how it would be in the game industry,” Brinkerhoff notes.

Once the games were developed, each team then posted them on Xbox Live Indie Games, where they underwent a rigorous peer-review approval process. In this system, if a game has a “bug,” the developer is notified and cannot re-post it for several days. Once a game has no defects, it can be sold online.

On XBLIG, each game sells for $1 per download and 70 percent of the money goes directly back to the students who developed the game.

The team that developed “Minions!” so far has reaped most of the rewards, with over $7,000 going directly into the student team’s pockets. “Mr. Gravity” has sold over 600 downloads, and “The Last Podfighter” has sold over 130 copies. Tyler Robinson, project manager, expects that “Mr. Gravity” sales will increase, as it has been in the top 50 on XBLIG for about a week.

Entertainment Arts and Engineering is a fairly young endeavor, which combines work of the U’s College of Engineering and College of Fine Arts. The development of these video games is the culmination of the program’s interdisciplinary philosophy.

Each team is represented by computer science majors and film/media arts majors. The original music was composed for all three games by fine arts student Michelle MacArt.

Brinkerhoff calls the interdisciplinary approach “invaluable.” He goes on to say, “Getting to make a game that doesn’t just work, but looks good too is really fun.”

The space graphics are what attracted Brinkerhoff to his game’s concept, he says. He credits Charlie Mimnaugh, creative director, with the artistic design of the game, and two other members of his team created YouTube videos and a website for it.

Dan Priestly, technical director on “Minions!,” echoes Brinkerhoff’s sentiments, and adds, “Not many classes give complete creative control to the students, which I believe drives a lot of motivation into making these games. When your schoolwork involves making something fun that is handled entirely the way you want to handle it, it opens up plenty of possibilities that wouldn’t be found in a typical course.”

Project Manager Colter Haycock also notes the importance of learning how to work with artists in order to create “Minions!” In fact, he says that much of the success of his team’s game is due to its visual style, which Priestly says was the most challenging part of the technical process.

The “Minions!” player can control their character from a “top-down,” or birds-eye, view or “over-the-shoulder,” which seems more like one is looking through the eyes of the character. Usually, Priestly and Haycock say, games have one or the other perspective. The team created the two perspectives because of positive reaction from the reviewers.

While all work on the Xbox 360 platform, the three games have a very different feel from one another, and that is largely due to the important feedback gained from the thorough review process of the course.

“Minions!” is a twin-stick shooter game. The term “twin-stick” means that there are two controls used for movement of the main character. The object of the game is to fight through minions of attackers and advance levels. Once the character moves through various challenges, which get more difficult as one progresses, points are unlocked to customize weapons and upgrade the player’s own minion helpers. The style of the game evokes playful cartoon figures with a simple background.

“Mr. Gravity,” by comparison, is a puzzle platform game with a black background and two-dimensional style. The object of “Mr. Gravity” is simple and timeless: Get Mr. Gravity to his significant other. At least, it seems simple enough; but the game adds a bit of a twist.

“The real trick to this game is actually produced through the game’s mechanic, which puts the player in the control seat of gravity for the entire world,” says Robinson. “The player is given four controls: make gravity go up, down, left or right. But, in doing this, the player controls not only Mr. Gravity, but also every object in the game that is affected by gravity.”

“The Last Podfighter” is an arcade-style space shooter that brings back memories of “Space Invaders” or “Asteroids,” only with realistic 3D graphics. The object of the game is to fight through waves of ships and use laser blasters and specialized weapons called pods to destroy enemies. Finally, the player will reach the capital ship and, of course, blow it up.

Most of the students on these projects are already graduated from the U. Robinson, Haycock and Brinkerhoff all work in the programming industry. Many members of the teams still speak to each other about collaborating on future projects or – as is the case with “Minions!” – working to upgrade the games they developed for the capstone course.

While Entertainment Arts and Engineering combines computer science and fine arts, Haycock found another great interest in the collaboration on his project. He really enjoyed managing the team and the commercialization process for “Minions!,” which already reached the No. 2 spot on XBLIG and stayed in the top ten downloaded games for two weeks. He says he’d like to pursue the business angle of the game industry in the future.

The games can all be found online at http://marketplace.xbox.com/en-US/Games/XboxIndieGames.