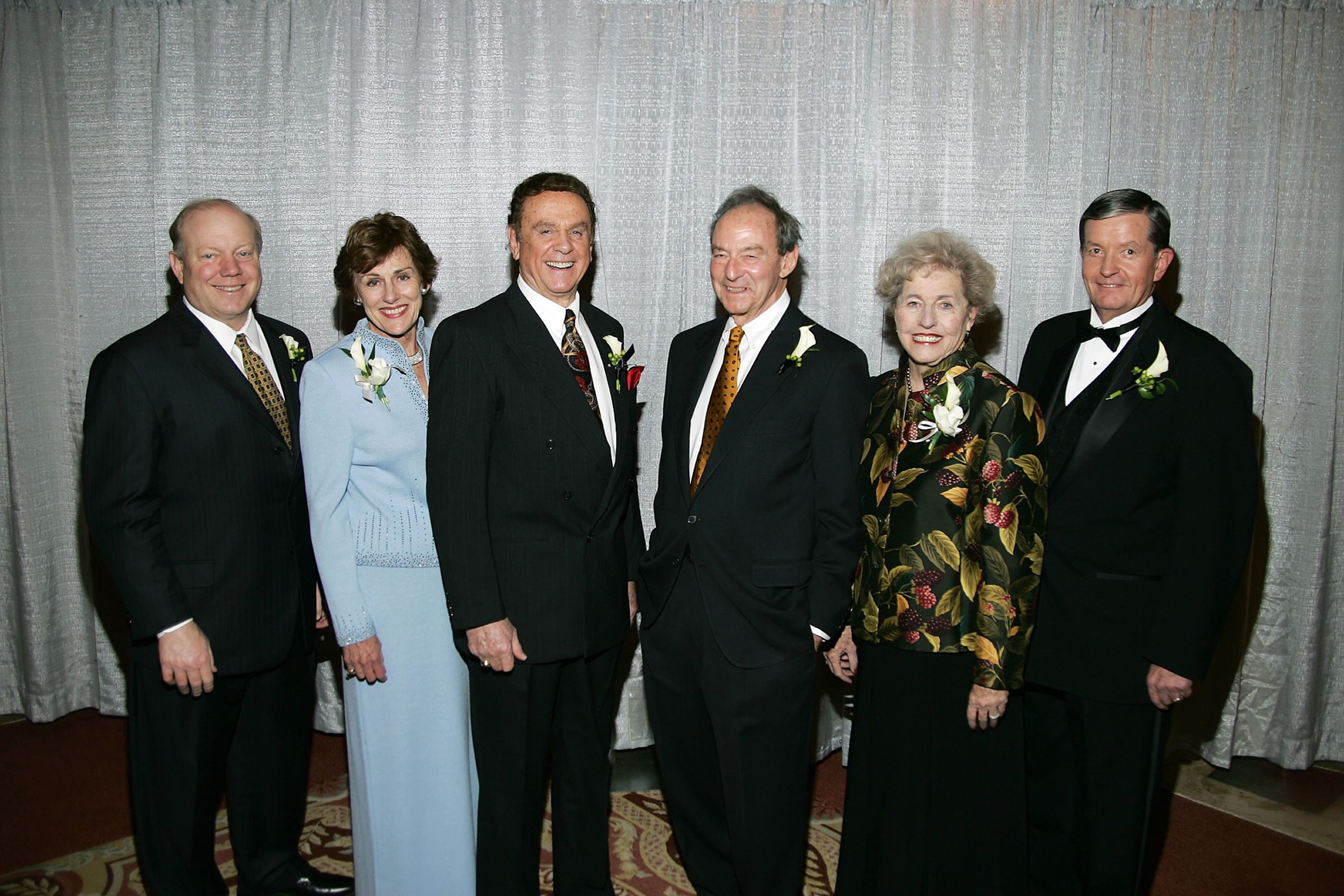 Jeff Hilton, president of the U’s Alumni Association, informed the audience of more than 500 alumni and friends, that the U now “boasts 210,000 alumni across the U.S. and in numerous other countries. Our association, which dates back to 1886, provides a vital connection back to this great institution and provides over $75,000 annually in scholarship monies to U of U students.”

Anne Cullimore Decker BS’57 MFA ’82 – is best known as a professional actress in theatre, opera, television and film, but she has also spent considerable time teaching at the U, in the U’s Mentor Program, as a visiting professor to the Honors Program and in the Department of Theatre’s Actor Training Program. She was a Thomas D. Dee Fellow, a Meritorious Award for Excellence in Teaching at the U, from 1989 to 1992. Decker is also an active member of the U’s National Advisory Council and has served in other capacities, including as an advisory board member for Pioneer Theatre Company, the College of Fine Arts, KUED, KUER and as a past vice president of the U’s Alumni Association. She is currently a member of the ZAP tax Advisory Board, chairs the Utah Arts Council and is a recipient of the Madeleine Award for the Arts and Humanities, arguably the state’s most prestigious award for distinguished contribution in her field.

Rhoda Worley Ramsey BS’47 – the founding partner and past president of the highly successful real estate firm The Ramsey Group, set an early model of a woman starting her own business and excelling, while encouraging and providing opportunity for other women to succeed as well. She has served as a past director of the Alumni Fund drive and on U boards, including KUED, the College of Humanities, President’s Club, Crimson Club and the Museum of Fine Arts. She has been highly visible in the community as well, serving on the Salt Lake County Board of Health, KSL Community Advisory Board and Utah Opera. Ramsey’s service to the community even included nearly getting frostbite while serving as a stand-in during rehearsals for the 2002 Winter Olympics opening and closing ceremonies.

Cecil O. Samuelson, Jr. BS’66 MS’70 MD’70 – is currently the 12th president of Brigham Young University. Active in the leadership of the Church of Jesus Christ of Latter-day Saints, he has served as a regional representative, stake president, stake high councilor, branch president, missionary and member of the First Quorum of the Seventy. Samuelson also served at the University of Utah as professor of medicine, dean of the School of Medicine and vice president for health sciences; and is a former senior vice president of Intermountain Health Care. Samuelson has received numerous scholastic honors and is the author or co-author of 48 original publications. He also has served as a director, officer or member of several national medical and hospital organizations.

Alonzo “Lon” W. Watson, Jr. BA’43 JD’51 – along with a B.S.F.S. from Georgetown School of Foreign Service in 1947, is a director of the George S. and Dolores Doré Eccles Foundation, the Nora Eccles Treadwell Foundation, and the Mariner S. Eccles foundation and is a trustee of the S.J. and Jessie E. Quinney Foundation. Now “of counsel” at Ray Quinney & Nebeker, Watson is a former president and chairman of the executive committee of the firm. His affiliation with the U includes service as a member of the National Advisory Council, the S.J. Quinney College of Law Board of Trustees and the Partners Committee of the College of Humanities. From the foundations on which he serves, he has participated in making gifts to the U amounting to more than $127 million.

Hilton then presented an Honorary Alumnus Award to “a true friend, advocate and supporter of this institution” – Larry H. Miller.

Larry H. Miller, CEO of the Larry H. Miller Group – which includes the Utah Jazz, Jordan Commons, KJZZ-TV, the Delta Center and over 40 auto dealerships – is a generous supporter of Utah higher education, including the University of Utah. Miller and his wife, Gail, donated $1.6 million for video displays and a new scoreboard at Rice-Eccles Stadium; donated $10 million to the Huntsman Cancer Foundation; and endowed the U’s Larry H. and Gail Miller Enrichment Scholarship, for minority need-based or first-generation students, which has provided almost $350,000 in scholarships this year alone. Larry H. Miller Group employees and their dependents can receive college funding through the Larry H. Miller Education Foundation. Currently, more than 190 dependents of employees are receiving scholarships. The Millers’ largesse has also supported a number of other education initiatives in Utah, including the Salt Lake Community College Miller Campus.

Hilton announced that the Distinguished Service Award “is given only rarely, when occasion calls for it. And this occasion surely does.” He then presented the prestigious award to Bill Marcroft.

Bill Marcroft – has spent the past 36 years as the “Voice of the Utes.” He put the microphone down last year after calling the last game of the U’s amazing 12-0 2004 football season. During the course of his nearly 40 years in broadcasting, Marcroft called approximately 1,500 games on KALL radio. Marcroft began his association with the U in the late 40s as a theatre major. After graduating in 1952, he joined the Air Force. Since there obviously wasn’t a “theatre division” in the military, he went to work in Tripoli, Libya with the closest thing available – Armed Forces radio and television, where he worked with legendary broadcaster Edward R. Murrow. Marcroft caught the broadcasting bug and his career path took on a new direction. After his service, Marcroft returned to Salt Lake and joined the local ABC affiliate station. He reported the news, weather and even hosted a children’s show as “Captain Jet.” He soon discovered, however, that his true love was sports. Marcroft began broadcasting Utah games on KALL radio in 1966, alongside Bill Howard. When Howard left in 1969, Marcroft took over calling the play-by-play. Since 1969, he has never missed a Utah football game and missed fewer than ten basketball games.

Special recognition was also bestowed on the recipient of the Founders Day Scholarship, which is given to an outstanding U student who has made significant contributions to the University and community and who has overcome difficult circumstances or particular challenges. The scholarship offers full tuition for one year (two semesters).

This year’s scholarship recipient, Miriam Pope, is a Business Management major who maintains a 3.88 cumulative GPA while working 20 hours a week as a student manager for the Union Building. She also participates in myriad University service projects and fund-raising efforts. Before coming to the U she was student body vice president at Salt Lake Community College, chaired the SLCC environmental and cultural service project, built a mentor partnership with a local elementary school, organized projects for underprivileged children, was on the SLCC honor roll and National Dean’s list and received the Utah Achievement Award and the 2002 Humanitarian of the Year Award. In her “free time,” Pope worked in the community with The Road Home, Crossroads Urban Center, Youth and Families with Promise. She currently serves as an intern with Ouelessebougou Utah Alliance, a nonprofit organization focusing on health, education and sustainable development in Sub-Saharan Africa.

“This year’s recipient is truly a young woman of great courage, personal strength and remarkable integrity,” stated President Young as he presented the 2005-2006 Founders Day Scholarship award. “We are honored to have Miriam be a part of the University’s family and even more honored to be in her presence tonight.”

Founders Day traditions date back to at least 1925, when the U marked its 75th anniversary with a celebratory gala to honor outstanding alumni and supporters. It has continued doing so ever since. For a list of past recipients, go to: www.alumni.utah.edu/foundersday.