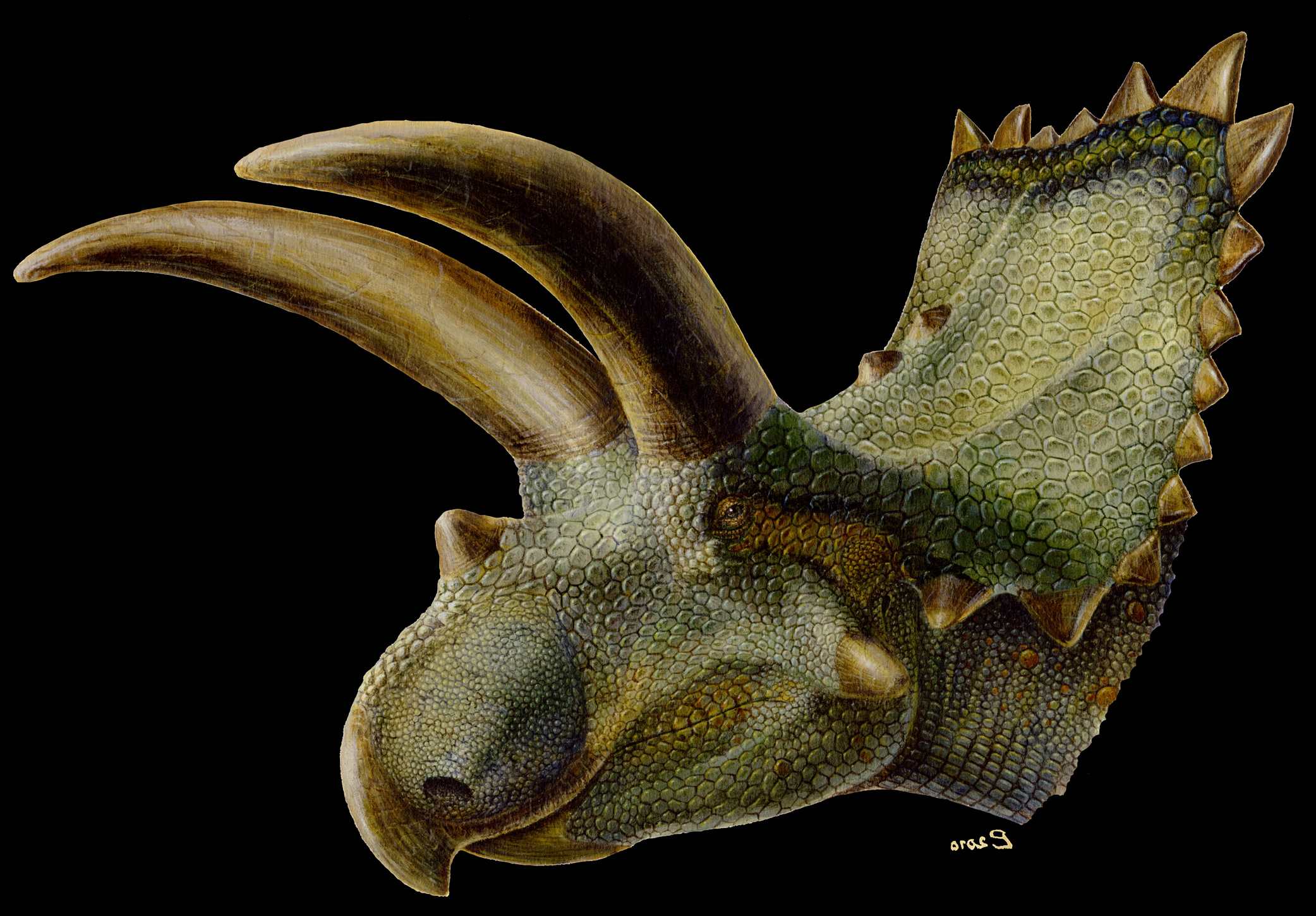 May 27, 2010 – A new species of horned dinosaur unearthed in Mexico has larger horns that any other species – up to 4 feet long – and has given scientists fresh insights into the ancient history of western North America, according to a research team led by paleontologists from the Utah Museum of Natural History at the University of Utah.

“We know very little about the dinosaurs of Mexico, and this find increases immeasurably our knowledge of the dinosaurs living in Mexico during the Late Cretaceous,” said Mark Loewen, a paleontologist with the museum and lead author of the study.

The 72-million-year-old rhino-sized creature – Coahuilaceratops magnacuerna – was a four- to five-ton plant-eater belonging to a group called horned dinosaurs, or ceratopsids. The name Coahuilaceratops magnacuerna (Koh-WHE-lah-SARA-tops mag-NAH-KWER-na), refers to the Mexican state of Coahuila where it was found, and to the Greek word “ceratops” meaning “horned face.” The second part of the name, magnacuerna, is a combination of Latin and Spanish meaning “great horn,” in reference to the huge horns above the eyes of this dinosaur.

The study, partially funded by the National Geographic Society, was conducted by Mark Loewen, Scott Sampson, Eric Lund and Mike Getty, paleontologists at the Utah Museum of Natural History. Also involved were Andrew Farke of the Raymond M. Alf Museum in Claremont, Calif.; Martha Aguillón-Martínez, Claudio de Leon and Rubén Rodríguez-de la Rosa from the Museum of the Desert in Saltillo, Mexico; and David Eberth of the Royal Tyrrell Museum of Palaeontology in Alberta, Canada.

The new species is to be announced in the book “New Perspectives on Horned Dinosaurs” to be released next week by Indiana University Press.

For most of the Late Cretaceous Period, from 97 million to 65 million years ago, high global sea levels resulted in flooding of the central, low-lying portion of North America. As a result, a warm, shallow sea extended from the Gulf of Mexico to the Arctic Ocean, splitting the continent into eastern and western landmasses.

Dinosaurs living on the narrow, peninsula-like western landmass – known as Laramidia – occupied only a narrow belt of plains that were sandwiched between the seaway to the east and rising mountains to the west. Central America had not formed at the time, which made Mexico the southern tip of this island continent.

In many ways, the Late Cretaceous is the best-understood time during the Age of Dinosaurs, thanks in large part to more than 120 years of dinosaur hunting in Canada, Montana, New Mexico and the Dakotas. Recent work has revealed new dinosaurs living at the same time in Utah, New Mexico and Texas, yet the dinosaurs from Mexico have remained virtually unknown.

“As the southernmost dinosaurs on Laramidia, Mexican dinosaurs will be a critical element in unraveling the ancient mystery of this island continent,” Sampson said.

Loewen described the arid, desert terrain where the dinosaur was recovered as nothing like Mexico during the Late Cretaceous. About 72 million years ago, the region was a humid estuary with lush vegetation, an area where salt water from the ocean mixed with fresh water from rivers, much like the modern Gulf Coast of the southeastern United States. Many dinosaur bones in the area are covered with fossilized snails and marine clams, indicating that the dinosaurs inhabited environments adjacent to the seashore.

The rocks in which Coahuilaceratops was found also contain large fossil deposits of jumbled duck-bill dinosaur skeletons. These sites appear to represent mass death events, perhaps associated with storms such as hurricanes that occur in the region today.

“Sitting near the southern tip of Laramidia, this region may have been hammered by monstrous storms,” Sampson said. “If so, such periodic cataclysms likely devastated miles of coastline, killing off large numbers of dinosaurs.”

Until recent years, there have been few large-scale paleontological projects in Mexico focused on the Mesozoic Era, from 253 million to 65 million years ago, also known as the Age of Dinosaurs. Indeed Coahuilaceratops is among the first dinosaurs from Mexico to be named.

Sampson spearheaded the paleontological expeditions to Coahuila in 2002 and 2003, securing funds from the University of Utah and National Geographic Society.

Coahuilaceratops comes from a rock unit known as the Cerro del Pueblo Formation, which dates to between 71.5 million and 72.5 million years ago. The skeletons, which de Leon discovered in 2001 near the town of Porvenir de Jalpa, approximately 40 miles west of Saltillo, were excavated in 2003. The fossils then were prepared at the Utah Museum of Natural History, requiring two years of meticulous work by skilled volunteer preparator Jerry Golden.

Based on the bone development of the skull and skeleton, the scientists believe that this animal was an adult at the time of death. Remains of a juvenile animal of the same species were also found at the site.

Coahuilaceratops was about 22 feet long as an adult, 6 feet to 7 feet tall at the shoulder and hips, with a 6-foot-long skull, and likely weighed about four to five tons.

“Being one of the largest herbivores in its ecosystem, adult Coahuilaceratops probably didn’t have to worry about large tyrannosaur predators,” Farke said.

By far the most obvious characteristic of Coahuilaceratops is its massive pair of horns, one above each eye. While the researchers lack a complete horn, they estimate from fossils they excavated that the horns were 3 to 4 feet long, Loewen said.

Although such horns are common features of ceratopsid dinosaurs, those of Coahuilaceratops appear to be the largest known for the group, exceeding the size of eye horns even in Triceratops. Scientists are uncertain of the massive eye horns’ purpose, but the most widely accepted idea is that they were related to reproductive success, functioning to attract mates and fight with rivals of the same species.

Loewen explained that Coahuilaceratops represents the first occurrence of an identifiable species of horned dinosaur in southern Mexico. “The horned dinosaurs are an extraordinary example of vertebrate evolution,” he said. They evolved and diversified on Laramidia along a thin strip of land that stretched from Alaska to Mexico. “Finding this horned dinosaur so far south in Mexico offers us a different picture of what the ancestors of Triceratops were like.”

The latest expedition also recovered remains of two duck-bill dinosaurs, as well as the remains of carnivores, including large tyrannosaurs (smaller, older relatives of T. rex) and more diminutive Velociraptor-like predators armed with sickle-claws on their feet.

Together with an abundance of fossilized bones, researchers discovered the largest assemblage of dinosaur trackways known from Mexico, an extensive area crisscrossed with the tracks of different kinds of dinosaurs. In all, the emerging picture shows a diverse group of dinosaurian herbivores and carnivores, perhaps representing a previously unknown assemblage of species.

“Rather than focusing only on individual varieties of dinosaurs, we are attempting to reveal what life was like in Mexico 72 million years ago, and understand how the unique ecosystem of Mexico relates to ecosystems to the north at the time,” said Loewen.

Few North American dinosaurs from this time period are known outside of the Drumheller region of Alberta. Eberth explained that researchers now have two points of comparison to examine not only different dinosaurs, but also different environments and ecologies.

As might be suspected, paleontologists are excited about the future paleontological potential of this area. “There are definitely more dinosaurs to be discovered in the region,” Lund said.

“Dinosaurs from this particular period are important because this is a time that is relatively poorly understood,” said Don Brinkman, a researcher at the Royal Tyrrell Museum. He is studying non-dinosaur vertebrates found at the site, including turtles, fish, and lizards. “The locality in Mexico goes a long way to filling in a gap in our knowledge of the record of changes in dinosaur assemblages throughout the Late Cretaceous.”

– Coahuilaceratops is the first horned dinosaur (ceratopsid) and only the fourth dinosaur species from Mexico to be named and described in scientific literature.

– Coahuilaceratops is a chasmosaurine ceratopsid, often called a “ceratopsian” or “horned” dinosaur, and was almost certainly an herbivore.

– Coahuilaceratops is closely related to the famous ceratopsid dinosaurs that appeared in Western North America, such as Chasmosaurus, Pentaceratops and Triceratops.

– Coahuilaceratops had the largest horns above its eyes of any known ceratopsid dinosaur.

– Coahuilaceratops had a very thick nasal bone with a relatively small rounded nose horn that is unlike that of any other ceratopsid dinosaur.

– Coahuilaceratops stood on all four legs and was not bipedal.

– Coahuilaceratops is from the Late Cretaceous Period’s Campanian Age, which spanned from approximately 84 million to 70 million years ago.

– Coahuilaceratops was excavated from the Cerro del Pueblo Formation, the basal formation of the Difunta Group in the Parras Basin within the state of Coahuila, Mexico. These rocks are dated to about 72 million years ago.

– The skull of Coahuilaceratops will be unveiled at the Museum of the Desert later this year.

After the embargo expires, additional information and images will be available at: http://www.umnh.utah.edu/pressroom