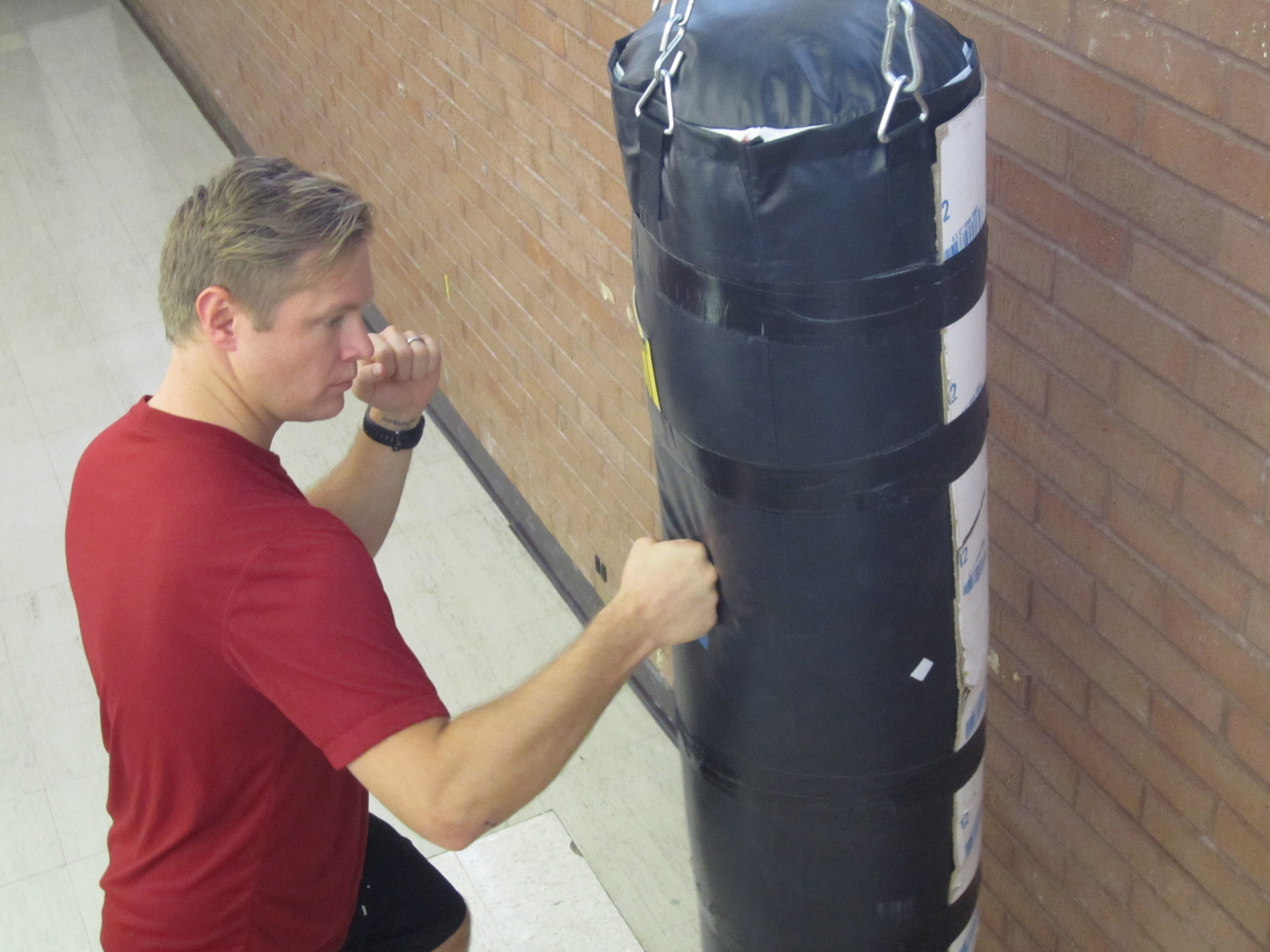 Dec. 19, 2012 – Men whacked punching bags for a University of Utah study that suggests human hands evolved not only for the manual dexterity needed to use tools, play a violin or paint a work of art, but so men could make fists and fight.

Compared with apes, humans have shorter palms and fingers and longer, stronger, flexible thumbs – features that have been long thought to have evolved so our ancestors had the manual dexterity to make and use tools.

“The role aggression has played in our evolution has not been adequately appreciated,” says University of Utah biology Professor David Carrier, senior author of the study, scheduled for publication Dec. 19 by the Journal of Experimental Biology.

“There are people who do not like this idea, but it is clear that compared with other mammals, great apes are a relatively aggressive group, with lots of fighting and violence, and that includes us,” Carrier says. “We’re the poster children for violence.”

Humans have debated for centuries “about whether we are, by nature, aggressive animals,” he adds. “Our anatomy holds clues to that question. If we can understand what our anatomy has evolved to do, we’ll have a clearer picture of who we were in the beginning, and whether aggression is part of who we are.”

Carrier agrees that human hands evolved for improved manual dexterity, but adds that “the proportions of our hands also allow us to make a fist,” protecting delicate hand bones, muscles and ligaments during hand-to-hand combat.

As our ancestors evolved, “an individual who could strike with a clenched fist could hit harder without injuring themselves, so they were better able to fight for mates and thus more likely to reproduce,” he says. Fights also were for food, water, land and shelter to support a family, and “over pride, reputation and for revenge,” he adds.

“If a fist posture does provide a performance advantage for punching, the proportions of our hands also may have evolved in response to selection for fighting ability, in addition to selection for dexterity,” Carrier says.

So Carrier and study co-author Michael H. Morgan – a University of Utah medical student – conducted their study to identify any performance advantages a human fist may provide during fighting.

The research was funded by the National Science Foundation.

Three Experiments and the Findings

The first experiment tested the hypothesis that humans can hit harder with a fist. So, Carrier and Morgan had 10 male students and nonstudents – ages 22 to 50 and all of them with boxing or martial arts experience – hit a punching bag as hard as they could.

To the researchers’ surprise, the peak force was the same, whether the bag was punched with a fist or slapped with an open hand. However, a fist delivers the same force with one-third of the surface area as the palm and fingers, and 60 percent of the surface area of the palm alone. So the peak stress delivered to the punching bag – the force per area – was 1.7 to three times greater with a fist strike compared with a slap.

“Because you have higher pressure when hitting with a fist, you are more likely to cause injury” to tissue, bones, teeth, eyes and the jaw, Carrier says.

The second and third experiments – which each also involved 10 male subjects – tested the hypothesis that a fist provides buttressing to protect the hand during punching.

To do that, the researchers measured the stiffness of the knuckle joint of the first finger, and how force is transferred from the fingers to the thumb. Both measurements were made with normal, buttressed fists or when partial fists were not buttressed.

Humans buttress – strengthen and stabilize – fists in two ways that apes cannot: The pads of the four fingertips touch the pads at the top of the palm closest to the fingers. And the thumb wraps in front of the index and middle fingers, and to some extent the ring finger, and those fingers are locked in place by the palm at the base of the thumb.

To measure stiffness of the second knuckle joint, the study’s 10 male subjects slowly pushed a pressure transducer, with clenched fists or with fingers bent but the fist unclenched. Researchers measured the force and also how much the index finger flexed.

Force transfer from fingers to the thumb also was measured, but in this case the subjects got in a one-handed pushup position, with their knuckles pushing down on a block placed on a different force transducer.

The second and third experiments found that buttressing provided by the human fist increased the stiffness of the knuckle joint fourfold (or reduced flexing fourfold), and also doubled the ability of the fingers to transmit punching force, mainly due to the force transferred from the fingers to the thumb when the fist is clenched.

Carrier notes that besides dexterity and aggression, a third theory to explain the proportions of human hands also may be true: Natural selection for walking and running among human ancestors led to shorter toes and a longer big toe – and the responsible genes also led to shorter fingers and longer thumbs.

How Selection Favored Fists and Aggression

Apes’ elongated fingers and hands evolved so they could climb trees.

“The standard argument is that once our ancestors came out of the trees, the selection for climbing was gone, so selection for manipulation became dominant, and that’s what changed the shape of our ancestors’ hands,” Carrier says. “Human-like hand proportions appear in the fossil record at the same time our ancestors started walking upright 4 million to 5 million years ago. An alternative possible explanation is that we stood up on two legs and evolved these hand proportions to beat each other.”

Carrier says that if manual dexterity was the only driving force, humans could have evolved manual dexterity with longer thumbs without the fingers and palms getting shorter. But, he adds, “there is only one way you can have a buttressed, clenched fist: the palms and fingers got shorter at the same time the thumb got longer.”

— No ape hits with a clenched fist other than humans.  Gorilla hands are closer in proportion to human hands than are other apes’ hands – a paradox since chimps are better known for tool-making and dexterity. So Morgan and Carrier also believe aggression was a factor in the evolution of gorillas’ hands.

— Humans use fists as threat displays. “If you are angry, the reflexive response is to form a fist,” Carrier says. “If you want to intimidate somebody, you wave your fist.”

— Sexual dimorphism – a difference in body size between males and females – is greater if there is more male-male competition in a primate species. “Look at humans and gorillas. The difference between the sexes is mainly in the upper body and the arms, and especially the hands,” Carrier says. “It’s consistent with the hand being a weapon.”

Carrier and Morgan write that the human hand is paradoxical.

“It is arguably our most important anatomical weapon, used to threaten, beat and sometimes kill to resolve conflict,” they say. “Yet it is also the part of our musculoskeletal system that crafts and uses delicate tools, plays musical instruments, produces art, conveys complex intentions and emotions, and nurtures.”

“More than any other part of our anatomy, the hand represents the identity of Homo sapiens. Ultimately, the evolutionary significance of the human hand may lie in its remarkable ability to serve two seemingly incompatible but intrinsically human functions.”