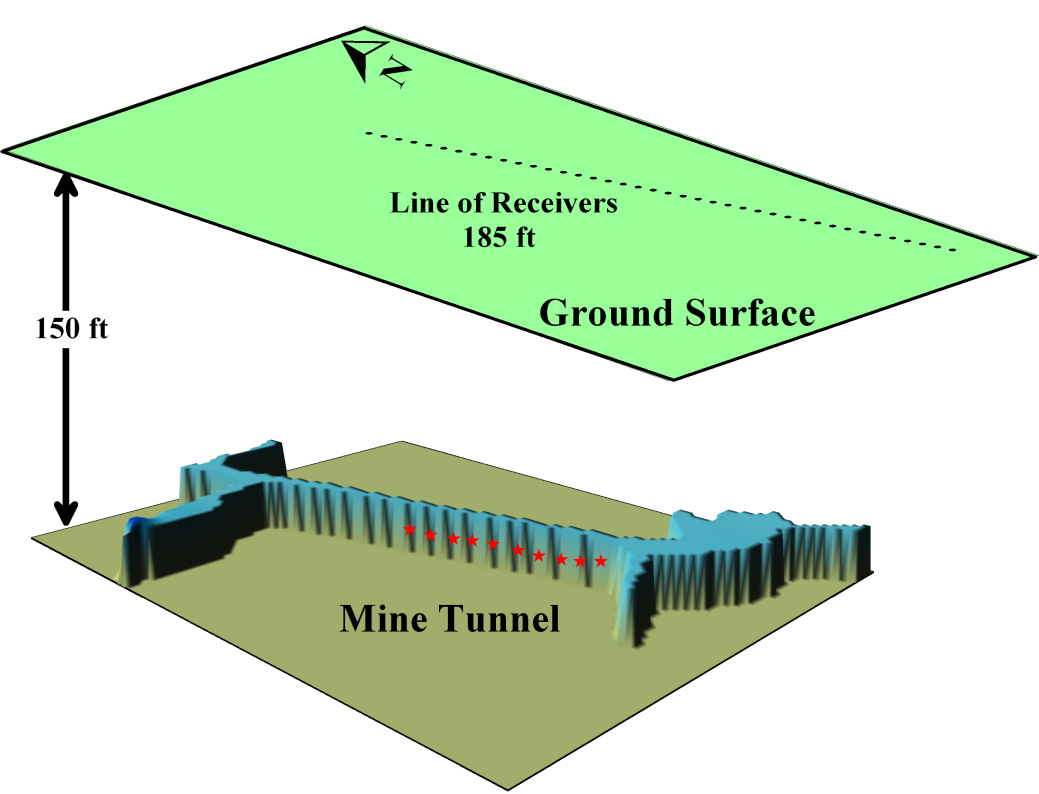 March 26, 2009 – University of Utah scientists devised a new way to find miners trapped by cave-ins. The method involves installing iron plates and sledgehammers at regular intervals inside mines, and sensitive listening devices on the ground overhead.

“We developed an approach to find the location of trapped miners inside a collapsed mine, regardless of noise from the environment around the mine,” says Sherif Hanafy, an adjunct associate professor of geology and geophysics at the University of Utah and first author of a study demonstrating the technique.

The method records “seismic ‘fingerprints’ generated by a trapped miner banging on the mine wall, and uses those fingerprints to locate him. Each different location in the mine that is banged has a unique fingerprint,” says Gerard Schuster, a professor of geology and geophysics at the University of Utah and the study’s senior author.

“We hope to make it easier to find out if miners are alive after a collapse and, if they are alive, where they are located,” he adds. “It’s not guaranteed to work every time, but looks promising from the tests we did. This is not rocket science; it’s rock science.”

The new study was published in this month’s issue of The Leading Edge, a journal of the Society of Exploration Geophysicists.

The researchers and a number of Utah graduate students tested the system twice. One test was in a utility tunnel beneath the University of Utah campus. The other test was in much deeper tunnels in an abandoned copper mine near Tucson, Ariz.

Schuster says more testing is needed to make sure the method will work in deeper mines, such as coal mines, which can be a few thousand feet deep. He says that while the method was tested only in horizontal mines tunnels, it also should work in vertical shafts.

Along with Hanafy and Schuster, the study’s coauthors are Weiping Cao, a doctoral student in geology and geophysics, and M.K. “Kim” McCarter, a professor of mining engineering at the University of Utah. In addition to his Utah affiliation, Hanafy is an associate professor of geophysics at Cairo University in Egypt.

How the Method Can Find Trapped Miners

The system developed by the Utah researchers would be installed in stages as a mine is excavated. Components include:

Listening stations would record the seismic wave pattern from each geophone. The collective pattern would be compared – by a computer – with the calibration seismograph recordings collected prior to the collapse. A match identifies the base station or stations where survivors have gathered and walloped the iron plate.

Schuster hopes a company will commercialize the miner-location system. A patent is pending on the method, and University of Utah technology commercialization officials have discussed it with a variety of mining companies.

The system would include perhaps 100 geophones and 100 base stations, and cost about $100,000 for a typical mine – an amount Schuster considers inexpensive.

“It’s like having a fire extinguisher on every floor. How much does that cost?”

Schuster’s research, which is funded by 20 oil and gas companies, focuses on developing improved methods to use seismic waves to make three-dimensional images identifying the location of oil, gas and mineral deposits. He will switch to adjunct status at the University of Utah this summer to become a geosciences professor at King Abdullah University of Science and Technology in oil-rich Saudi Arabia.

His work on the miner-locating method was triggered by Utah’s Aug. 6, 2007, Crandall Canyon coal mine collapse, which resulted in the deaths of six miners and, 10 days later, three rescuers. Schuster had just returned from a five-month sabbatical in Saudi Arabia, working on a system to use seismic signals to locate the “fluid front” of underground oil being pushed toward a well by injected steam or carbon dioxide gas.

Schuster says the technology in the miner-locating system is one that exploration geophysicists have used since the 1970s to search for oil, and later was adapted by the military to locate submarines with quiet propulsion systems. Just as efforts to determine an earthquake’s location looked at only a small part of the seismic wave signal, so did old efforts to look for submarines by using sound generated by sonar, he says.

With the new technology, “we look at the entire signal,” which Schuster compares with analyzing an entire fingerprint rather than one or two whorls in that fingerprint.

The researchers first tested their system in November 2007 near the David Eccles School of Business on the University of Utah campus. Graduate students set up 25 base stations in a 150-foot-long stretch of tunnel that carries steam pipes and other utilities 10 feet beneath the surface.

Hanafy says they spaced the base stations anywhere from 1.6 feet to 13 feet apart, and whacked each one with a 16-pound sledgehammer while geophones on the surface recorded the seismic waves. Geophones were aligned 115 feet away instead of directly over the tunnel – a way to mimic recording seismic waves from a much deeper tunnel.

“We had 25 base stations inside the tunnel, and we calculated the result for each one assuming a trapped miner was at each one of these,” he says. “We were able to locate exactly where each bang was coming from,” even when stations were only 1.6 feet apart.

Schuster says that to “simulate battlefield conditions” at a working mine, a computer was used to simulate “white noise” that drowned out the real seismic signals by a 2,000-to-1 ratio. He says the seismic signature of a bang on a base station plate still could be distinguished.

“It’s like at a cocktail party you have 2,000 people talking at the same time in different conversations, and somehow you can home in on one conversation,” he says.