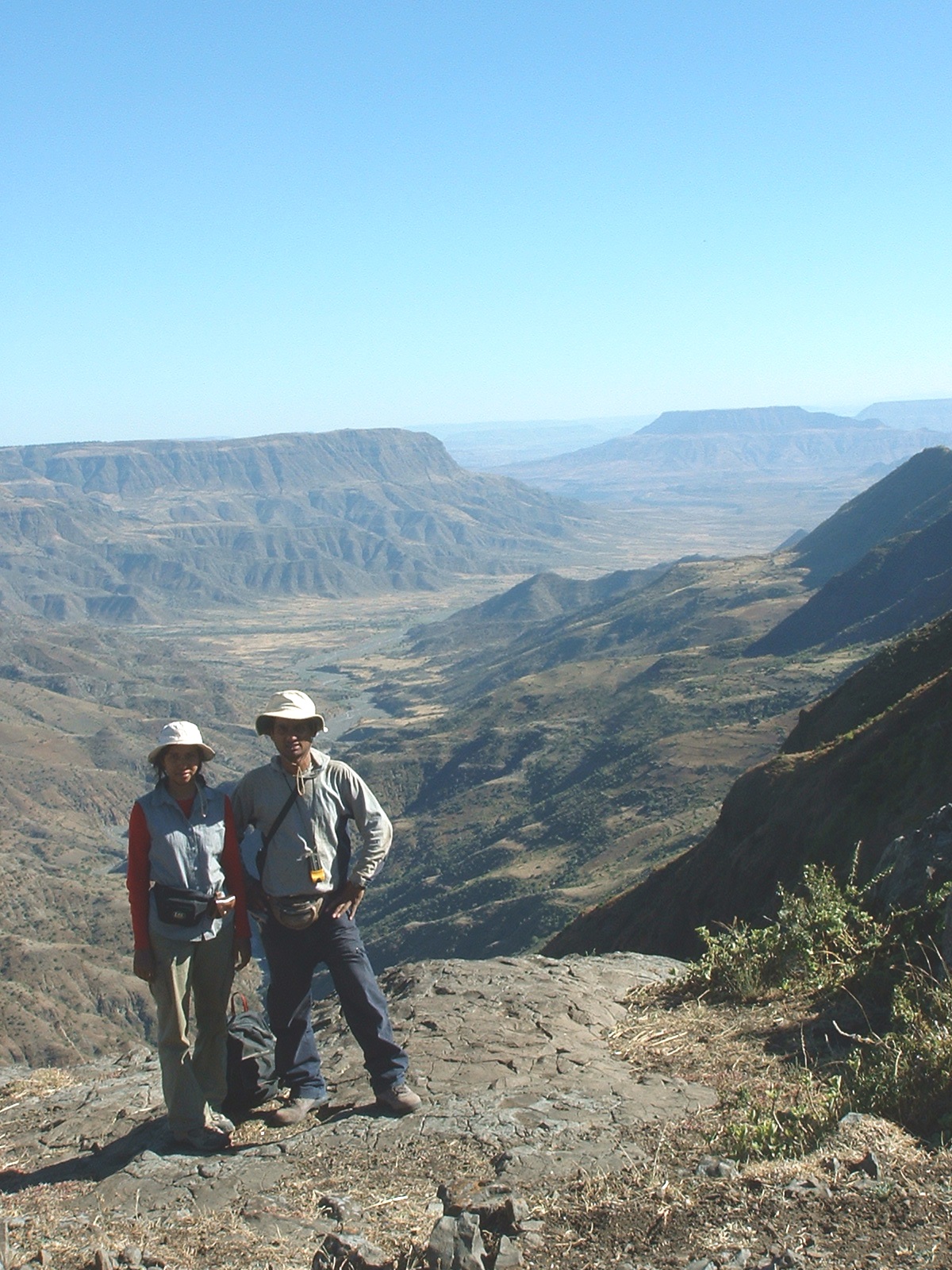 Dec. 19, 2007 – Scientists long have focused on how climate and vegetation allowed human ancestors to evolve in Africa. Now, University of Utah geologists are calling renewed attention to the idea that ground movements formed mountains and valleys, creating environments that favored the emergence of humanity.

“Tectonics [movement of Earth’s crust] was ultimately responsible for the evolution of humankind,” Royhan and Nahid Gani of the university’s Energy and Geoscience Institute write in the January, 2008, issue of Geotimes, published by the American Geological Institute.

They argue that the accelerated uplift of mountains and highlands stretching from Ethiopia to South Africa blocked much ocean moisture, converting lush tropical forests into an arid patchwork of woodlands and savannah grasslands that gradually favored human ancestors who came down from the trees and started walking on two feet – an energy-efficient way to search larger areas for food in an arid environment.

In their Geotimes article, the Ganis – a husband-and-wife research team who met in college in their native Bangladesh – describe this 3,700-mile-long stretch of highlands and mountains as “the Wall of Africa.” It parallels the famed East African Rift valley, where many fossils of human ancestors were found.

“Because of the crustal movement or tectonism in East Africa, the landscape drastically changed over the last 7 million years,” says Royhan Gani (pronounced rye-hawn Go-knee), a research assistant professor of civil and environmental engineering. “That landscape controlled climate on a local to regional scale. That climate change spurred human ancestors to evolve from apes.”

Tectonics – movements of Earth’s crust, including its ever-shifting tectonic plates and the creation of mountains, valleys and ocean basins – has been discussed since at least 1983 as an influence on human evolution.

But Royhan Gani says much previous discussion of how climate affected human evolution involves global climate changes, such as those caused by cyclic changes in Earth’s orbit around the sun, and not local and regional climate changes caused by East Africa’s rising landscape.

A Force from within the Earth
The geological or tectonic forces shaping Africa begin deep in the Earth, where a “superplume” of hot and molten rock has swelled upward for at least the past 45 million years. This superplume and its branching smaller plumes help push apart the African and Arabian tectonic plates of Earth’s crust, forming the Red Sea, Gulf of Aden and the Great Rift Valley that stretches from Syria to southern Africa.

As part of this process, Africa is being split apart along the East African Rift, a valley bounded by elevated “shoulders” a few tens of miles wide and sitting atop “domes” a few hundreds of miles wide and caused by upward bulging of the plume.

The East African Rift runs about 3,700 miles from the Ethiopian Plateau south-southwest to South Africa’s Karoo Plateau. It is up to 370 miles wide and includes mountains reaching a maximum elevation of about 19,340 feet at Mount Kilimanjaro.

The rift “is characterized by volcanic peaks, plateaus, valleys and large basins and freshwater lakes,” including sites where many fossils of early humans and their ancestors have been found, says Nahid Gani (pronounced nah-heed go-knee), a research scientist. There was some uplift in East Africa as early as 40 million years ago, but “most of these topographic features developed between 7 million and 2 million years ago.”

A Wall Rises and New Species Evolve
“Although the Wall of Africa started to form around 30 million years ago, recent studies show most of the uplift occurred between 7 million and 2 million years ago, just about when hominins split off from African apes, developed bipedalism and evolved bigger brains,” the Ganis write.

“Nature built this wall, and then humans could evolve, walk tall and think big,” says Royhan Gani. “Is there any characteristic feature of the wall that drove human evolution?”

The answer, he believes, is the variable landscape and vegetation resulting from uplift of the Wall of Africa, which created “a topographic barrier to moisture, mostly from the Indian Ocean” and dried the climate. He says that contrary to those who cite global climate cycles, the climate changes in East Africa were local and resulted from the uplift of different parts of the wall at different times.

Royhan Gani says the change from forests to a patchwork of woodland and open savannah did not happen everywhere in East Africa at the same time, and the changes also happened in East Africa later than elsewhere in the world.

The Ganis studied the roughly 300-mile-by-300-mile Ethiopian Plateau – the most prominent part of the Wall of Africa. Previous research indicated the plateau reached its present average elevation of 8,200 feet 25 million years ago. The Ganis analyzed rates at which the Blue Nile River cut down into the Ethiopian Plateau, creating a canyon that rivals North America’s Grand Canyon. They released those findings in the September 2007 issue of GSA Today, published by the Geological Society of America.

“Clearly, the Wall of Africa grew to be a prominent elevated feature over the last 7 million years, thereby playing a prominent role in East African aridification by wringing moisture out of monsoonal air moving across the region,” the Ganis write.

That period coincides with evolution of human ancestors in the area.

Royhan Gani says the earliest undisputed evidence of true bipedalism (as opposed to knuckle-dragging by apes) is 4.1 million years ago in Australopithecus anamensis, but some believe the trait existed as early as 6 million to 7 million years ago.

The Ganis speculate that the shaping of varied landscapes by tectonic forces – lake basins, valleys, mountains, grasslands, woodlands – “could also be responsible, at a later stage, for hominins developing a bigger brain as a way to cope with these extremely variable and changing landscapes” in which they had to find food and survive predators.

For now, Royhan Gani acknowledges the lack of more precise timeframes makes it difficult to link specific tectonic events to the development of upright walking, bigger brains and other key steps in human evolution.

“But it all happened within the right time period,” he says. “Now we need to nail it down.”