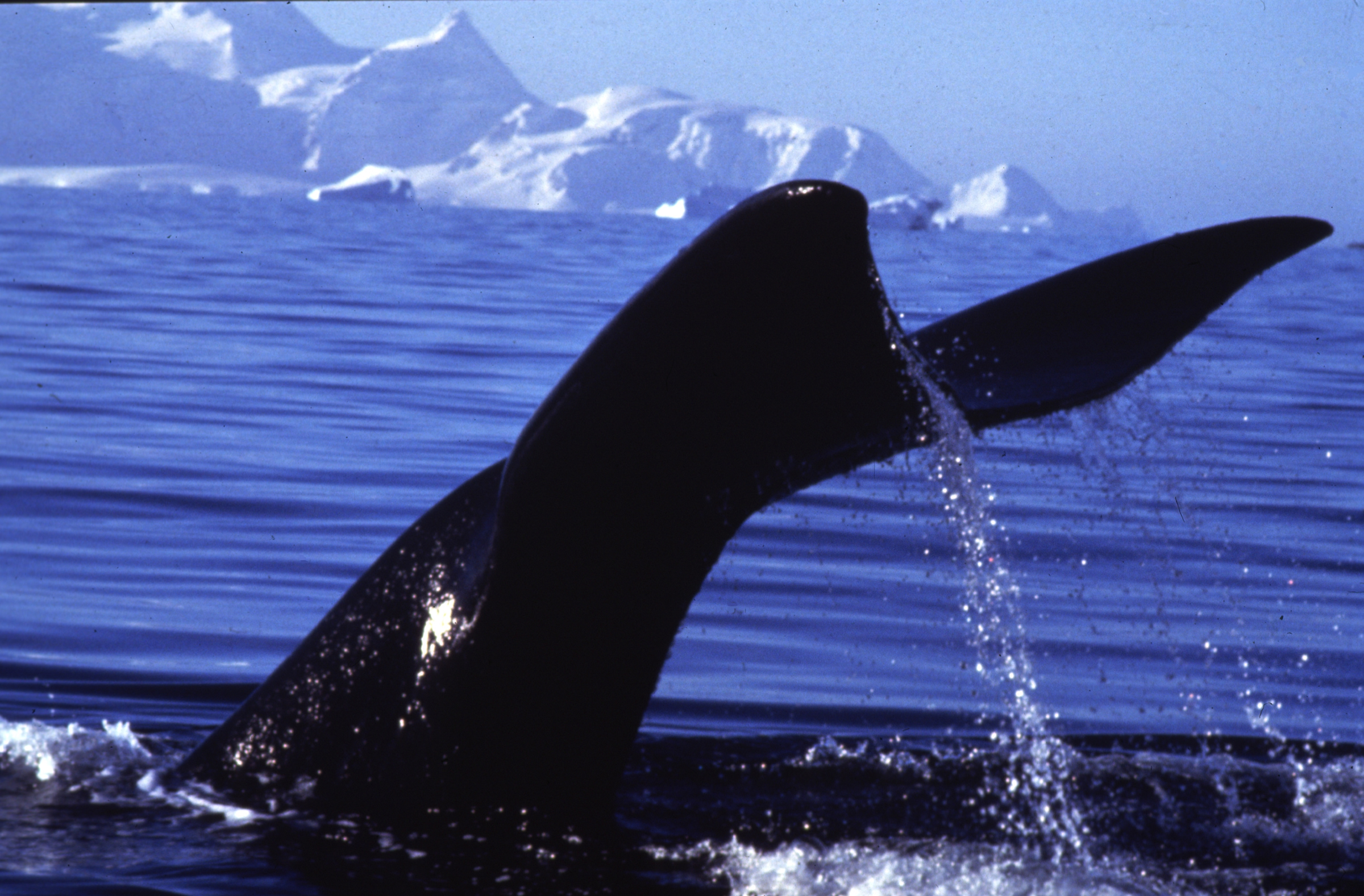 The news release below from the British Antarctic Survey deals with a study co-authored by University of Utah biologist Vicky Rowntree.

The study found a direct relationship between the climate phenomenon known as El Nino and the breeding of “right whales.”

“The whales produce fewer calves than expected in years when El Nino makes waters warmer in the western South Atlantic off Antarctica,” Rowntree says. “The warmer water causes a reduction in the abundance of krill, which are shrimp-like crustaceans eaten by large whales and other predators.”

Rowntree also has prepared a brief page of “talking points” which may be obtained by email from her or from leesiegel@ucomm.utah.edu

Rowntree is a research associate professor of biology at the University of Utah and also directs the Right Whale Program for the Whale Conservation Institute/Ocean Alliance in Lincoln, Mass.

New research shows that global climate processes are affecting southern right whales (Eubalaena australis) in the South Atlantic. A thirty-year study by an international team of scientists found a strong relationship between breeding success of whales in the South Atlantic and El Nino in the western Pacific. The results are published this week in the online journal Biology Letters.

Southern right whales migrate from the South Atlantic to the Southern Ocean to feed. Scientists know from other studies that following El Nino, changes in sea temperatures affect the availability of krill, a shrimp-like crustacean, which is the main diet of these whales. It is known that these changes affect penguins and seals in the Antarctic, but this is the first time the link has been made with whales as they return to their calving grounds in the South Atlantic.

Keith Reid from British Antarctic Survey (BAS) said, “These results help us to understand processes in three connected oceans and are crucial to predicting the consequences of climate change on the whales.”

Southern right whales have been internationally protected since 1935. Their populations are showing signs of recovery, however, sea surface temperatures in parts of the Southern Ocean have increased by 1°C over the last 50 years and if they continue to rise this could threaten their recovery.

Picture Editors: Stills and footage of whales and general Antarctic scenery are available from the BAS Press Office as above.

For this study 1828 southern right whales were individually identified by photographs taken from 1971-2000 on their breeding grounds off Peninsula Valdes, Argentina. Of those, 564 have been seen calving at least once.

Southern right whales from Argentina migrate to the Southern Ocean to feed on Antarctic krill during the summer; feeding alongside other krill predators such as fur seals and gentoo penguins. The exact mechanism of the El Nino induced changes in krill populations is currently the subject of research at BAS.

The study showed a six-year time lag between sea temperature changes in the Western Pacific and whale breeding success in the South Atlantic.

Southern right whales were some of the first species to be heavily depleted by whaling and have been given international protection since 1935. However, illegal catches by the USSR continued with several thousand being taken in the South Atlantic in the 1960s. Since the 1970s the population of southern right whales in the SW Atlantic has been increasing at an average of 7% a year but is still only at a small fraction of its pre-exploitation size.

There are few long-term analyses of conditions in the Southern Ocean, making temperature trends difficult to monitor. Scientists at BAS combined several sets of satellite data, historical records and measurements taken from ships to reconstruct the temperature in the upper layer of the sea over the past few decades. They found the average sea temperature off the Antarctic Peninsula during the summer rose by 1.2C during the period 1955-1994.

British Antarctic Survey is a world leader in research into global issues in an Antarctic context. It is the UK’s national operator and is a component of the Natural Environment Research Council. It has an annual budget of around £40 million, runs nine research programmes and operates five research stations, two Royal Research Ships and five aircraft in and around Antarctica. More information about the work of the Survey can be found at: www.antarctica.ac.uk