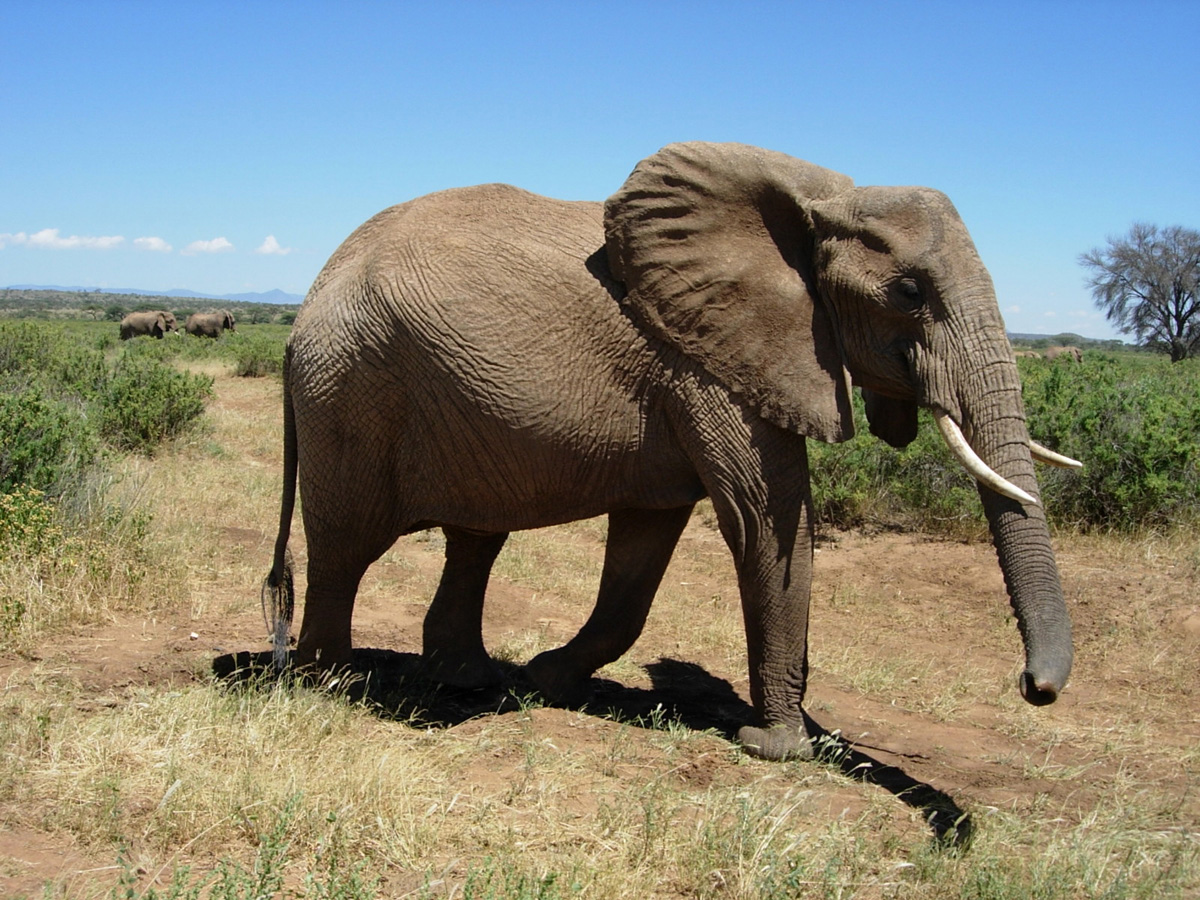 April 13, 2009 – Two weeks after the rains begin, an elephant family named “the Royals” usually switches to a grass diet to bulk up for pregnancy and birth. But when they wandered off their African reserve one rainy season, cattle grazed the grass so short that elephants couldn’t eat it, according to a University of Utah study.

The research – which suggests how climate change and human encroachment may affect endangered elephants – was led by Thure Cerling, a distinguished professor of geology and geophysics, and biology. He used Global Positioning System (GPS) tracking collars and analyzed carbon and other isotopes in tail hair to monitor the elephants’ movements and diet from early 2000 to early 2006.

The study involved Victoria, Anastasia and Cleopatra – three daughters of a mother elephant named Queen Elizabeth, who died of old age the first year of the study. The findings are set for publication Monday, April 13, in the online edition of the journal Proceedings of the National Academy of Sciences.

The research was conducted on the African savanna in and around the Samburu and Buffalo Springs national reserves in northern Kenya.

“Fifteen years ago, there was a lot of poaching in the area, and elephants were getting killed,” Cerling says. “But in the past 15 years, security has improved considerably, so people are moving in with cattle. Now there’s a suggestion the elephants are finding it harder to compete with the cattle than with the poachers.”

The study also showed an intricate interplay in the timing of the rainy season, the growth of grass, when the elephants eat grass, and when they breed and give birth.

Five weeks after the rainy season starts, and three week after the proportion of grass in the elephants’ diet reaches maximum levels, females in the 800-member Samburu-Buffalo Springs elephant population are most likely to conceive.

The elephants give birth 22 months after conception, with the peak of births just in time for another rainy season to provide water and grass for offspring. Fifty to 60 calves are born annually in the Samburu-Buffalo Springs elephant population.

Cerling conducted the study with two University of Utah colleagues – James Ehleringer, a distinguished professor of biology, and Christopher Remien, a doctoral student in mathematics – and with conservation biologists George Wittemyer of Colorado State University and Save the Elephants in Nairobi, and Iain Douglas-Hamilton, who founded Save the Elephants and is affiliated with Oxford University.

On the Trail (or Tail) of the Royals Using Stable Isotopes

To keep track of elephants in the Samburu and Buffalo Springs reserves, Save the Elephants named different family units and many elephants within them. Cerling compares elephant families with school cliques.

Isotopes are different forms or weight of a single element – for example, common carbon-12 versus rare carbon-13. The method used in the study involves analyzing ratios of stable isotopes – those that do not decay radioactively.

Cerling used the method in a 2006 study that showed how isotope analysis and tracking collars could be used to monitor elephant movements and diets as a way to minimize human-pachyderm conflicts and determine the best locations for sanctuaries.

With elephants endangered and their food sources threatened by climate change and human encroachment, tail-hair isotope analysis “provides a [weekly] record of their diet and behavior” to guide conservation efforts, he says. “We get a continuous record of their diet even though we don’t have anyone on the ground watching them.”

During the study, elephants occasionally were immobilized with drug-filled dart guns so tracking collars could be placed on them or batteries for the collars replaced. At those times – usually annually, but sometimes more often – the scientists cut 1.8-foot-long samples of tail hair. The hair grows about an inch per month, so a single hair contained isotopic clues to diet during an 18-month period. During the six-year study, nine tail hairs were collected, covering the entire time span.

GPS collars recorded the elephant’s positions every hour, and during the six-year study, at least one of the Royals wore a collar at any given time. Anastasia and Cleopatra both wore collars for one six-month period, showing that 95 percent of the time, they stayed within two-thirds of a mile of each other.

By analyzing carbon isotope ratios along the length of a single elephant hair, the researchers could see the twice-annual switch when rain falls and the elephants go from eating mostly trees and shrubs to eating mostly grasses, and then back again.

The study found the elephants’ average grass intake during the study was 21 percent of their diet. During the dry season, grass was about 15 percent of their diet, but that skyrocketed to 50 percent grass during rainy seasons. Grass consumption peaked at 60 percent during a particularly good rainy season after a prolonged drought, Cerling says, noting the elephants must have thought, “Finally, they have opened the restaurant.”

Cerling says the researchers don’t know why “the Royals” – a group of 20 elephants including the four studied – wandered off the reserve during the April-May 2003 rainy season, but when they did, tail hair carbon isotope levels showed they were eating only trees and shrubs and no grass. That was highly unusual, because even during the dry season they normally eat 15 percent grass.

“The impact of overgrazing by cattle on the typical wet season diet of elephants is clear,” the researchers wrote. “Competition with cattle results in poor access to high-quality grass forage because cattle keep the grass very short and out-compete elephants.”

The findings provide a hint that as Kenya’s population continues to burgeon, and as global warming produces more droughts, increasing competition for grass with domestic cattle might threaten the elephants’ ability to bulk up for pregnancy.

“We’d need quite a bit of data before we could say that, but it is clear the grass is providing nutrients they really want and presumably need for successful reproduction,” Cerling says. “With increased drought, they may run into a reproductive wall.”

Hydrogen and Oxygen: A Record of Dry Times and Rainy Seasons

Water is made of hydrogen and oxygen, so ratios of rare hydrogen-2 (deuterium) to hydrogen-1, and of rare oxygen-18 to oxygen-16 in tail hair reflect “available drinking water, including river water,” Cerling says. “In the dry season, rivers tend to be quite evaporated and have different isotope ratios than in rainy season, when they are flowing.”

“The elephants drink the water, and it actually changes the isotope composition of their blood, which is reflected in the isotope composition of their hair,” he adds. The hydrogen isotope ratio in elephant tail hair drops when rains fill the rivers, which “shows that abundant water is becoming available at the peak of the birthing season,” which also is when vegetation growth peaks, Cerling says.

He says isotope analysis will help researchers understand “how, in the future, wildlife will respond to changes in land use as human population increases and there is increased competition for resources important to elephants – grass and water.”

The method can be extended “to other regions throughout Africa,” says Cerling. “The rest of Africa also is changing land use, and in all parts of Africa where elephants and humans coexist, there is resource competition.”

Cerling says the researchers hope to keep monitoring the elephants, including other families, for another 10 to 15 years, which will allow them to “look at how climate and land use change affect the elephants.”

The field work was funded by Save the Elephants and the Packard Foundation.