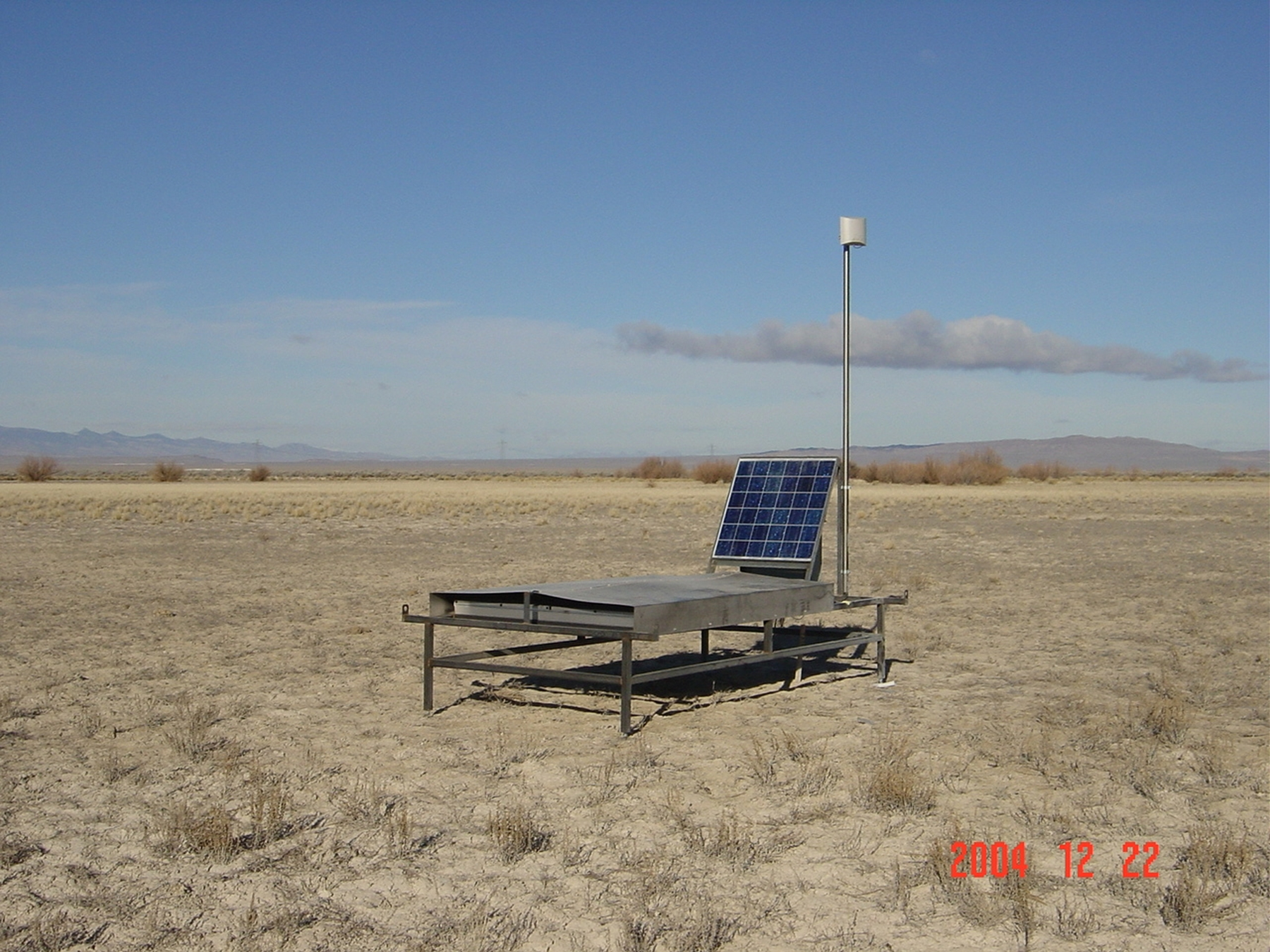 Rain this week softened unpaved roads over which trucks must travel as they carry the devices to a staging area. The University of Utah’s permit to build the observatory prohibits leaving ruts deeper than 4 inches in unpaved roads, according to physics Chair Pierre Sokolsky.

All details in the news release below remain the same except for the date. News media representatives wishing to cover the event should call Sokolsky early the morning of the deployment to make sure it still will take place that day. And reporters covering the event should meet at 11 a.m. MST at the Watson Cosmic Ray Center in Delta.

Oct. 16, 2006 — A helicopter will be used Thursday, Oct. 19, to lift 50 of some 570 hospital-bed-shaped particle detectors into place southwest of Delta, as physicists begin the latest stage of construction on the new, $17 million Telescope Array cosmic ray observatory.

Then they will drive to a staging area a few miles southwest of Delta, where the copter will lift the devices off a truck and place them in a grid, with each detector about three-quarters-mile from other detectors.

Poor weather could delay the deployment until Friday, Oct. 20 or Saturday, Oct. 21.

The Telescope Array – funded by $14.4 million from Japan’s government and $2.4 million from the U.S. National Science Foundation – is designed to reconcile conflicting results from past Japanese and American experiments aimed at determining the mysterious source of ultrahigh-energy cosmic rays, which are the most energetic particles in the universe.

There are two major components to the cosmic ray observatory:

Sokolsky says two of the fluorescence detectors buildings are complete and have some mirrors installed: six at Black Rock Mesa about 13 miles south-southwest of Delta, and four at Long Ridge 30 miles southwest of Delta. Construction of the third fluorescence detector facility begins this week at Middle Drum, 25 miles northwest of Delta. The Middle Drum facility will house mirrors and other equipment from the University of Utah’s old cosmic ray observatory, the High-Resolution Fly’s Eye at the Army’s Dugway Proving Ground.

The scintillation detectors will be spread in a grid over an 18-mile-by-22-mile area west of Delta. Eighteen previously were emplaced during a test deployment. Fifty more will be carried into place by a helicopter this week. The helicopter is being used to comply with environmental protection measures under a Bureau of Land Management permit. Some 80 percent of the observatory site is on BLM land, with the remainder on state and private land.

The scintillation detectors are table-like, except for an angled solar power array on each device, which makes each detector look like a hospital bed with one end tilted up. As they were built, the detectors were stored next to the Cosmic Ray Center in Delta. From there, they will be trucked to various staging areas, and then carried to their final locations by helicopter.

The new observatory is expected to start full operation by late summer 2007 and then conduct research for up to 10 years.

Background on a Big Mystery of the Universe

The new cosmic ray observatory will seek to answer one of the most perplexing mysteries in physics: What is the source of ultrahigh-energy cosmic rays, which are subatomic particles that come screaming into Earth’s atmosphere with incredible energy?

Cosmic rays are atomic nuclei – atoms stripped of their electrons – of chemical elements, mainly hydrogen and helium. The atmosphere prevents them from hitting Earth, and even if they could, they would zip through a person unnoticed. But if a single ultrahigh-energy cosmic ray could hit your head, it would feel like a fast-pitched baseball.

Some cosmic rays come from stars that explode as supernovas. But ultrahigh-energy cosmic rays are more powerful, and apparently come from distant reaches of the universe. Sokolsky suspects they originate from “active galactic nuclei,” which are supermassive black holes formed when about 1 billion collapsed stars amass at the centers of galaxies. Other possible sources include shock waves from colliding galaxies, noisy radio wave-emitting galaxies, exotic sources such as theorized cosmic strings and the decay of massive particles left over from the “big bang” scientists say created the universe about 13 billion years ago.

The Telescope Array will merge two technologies that have counted strikingly different numbers of ultrahigh-energy cosmic rays reaching Earth. Japan’s AGASA cosmic ray observatory has detected 10 times more of them than the High-Resolution Fly’s Eye. Sokolsky says the large number measured by AGASA implies the source is relatively nearby in the universe, but there are no known astronomical objects that could be the source.

Previous University of Utah news releases on the Telescope Array are at: