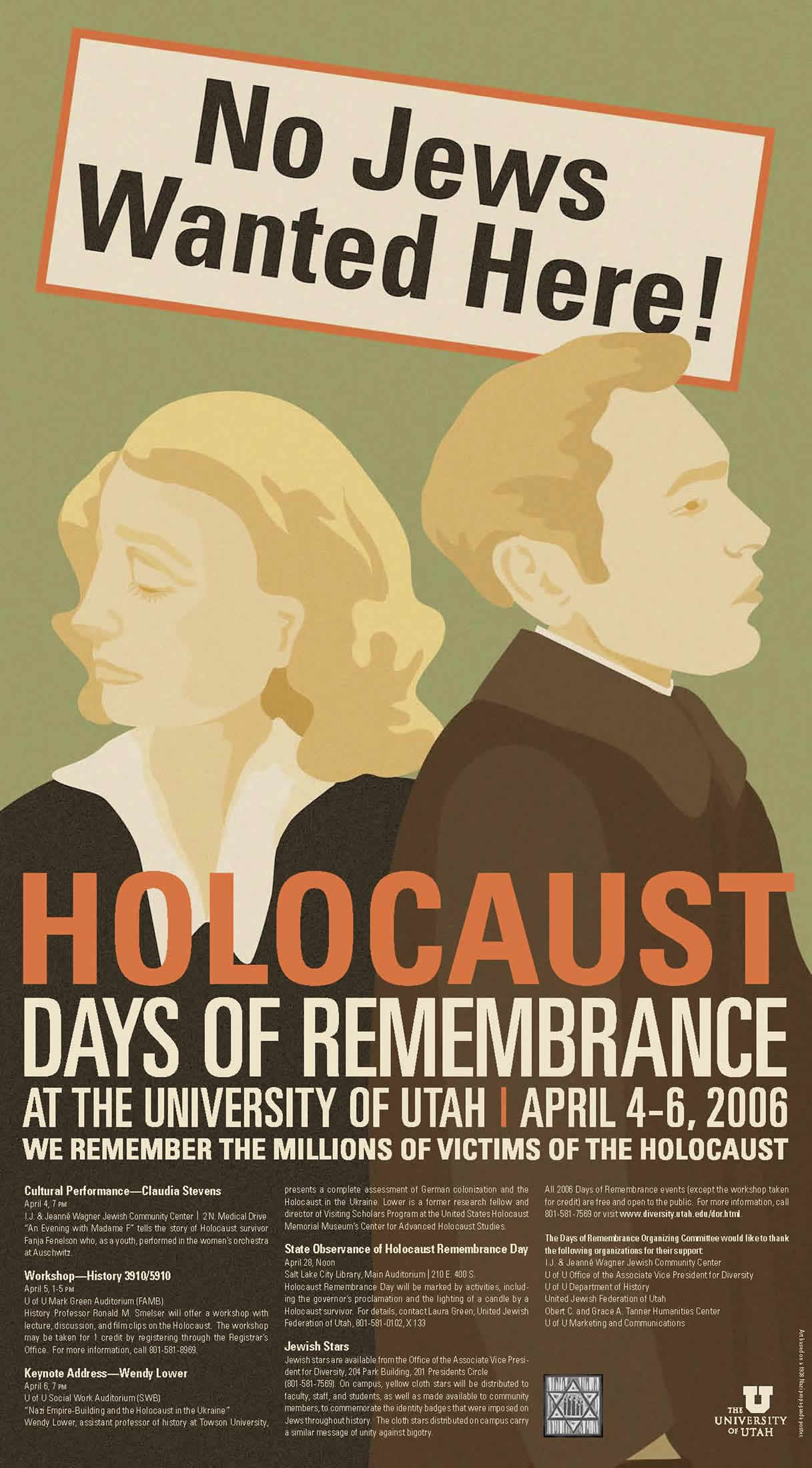 This year’s Days of Remembrance cultural performance will be given by pianist Claudia Stevens. Utilizing musical and theatrical elements, “An Evening with Madame F” tells the story of Holocaust survivor Fania Fenelon who, as a youth, performed in the women”s orchestra at Auschwitz concentration camp. The performance will be held April 4, at 7 p.m., at the I.J. & Jeanné Wagner Jewish Community Center, 2 N. Medical Drive.

History Professor Ronald Smelser will offer a half-day workshop with a lecture, discussion and film clips on the Holocaust. The event will be held on Wednesday, April 5, from 1 to 5 p.m., in the Mark Green Auditorium of the Francis Madsen Building (FAMB). The workshop may be taken for one hour of University credit by paying through the Registrar’s Office. For more information, call 801-581-8969.

On April 6, the keynote address, “From Berlin to Babi Yar: The Nazi War Against the Jews in Ukraine,” will be given by Wendy Lower, a former director of the Visiting Scholars Program at the U.S. Holocaust Memorial Museum”s Center for Advanced Holocaust Studies. The lecture will be given at 7 p.m. in the U of U Social Work Auditorium, 395 S. 1500 E., on the University of Utah campus.

Utah’s observance of Holocaust Remembrance Day will be held on Friday, April 28, at noon, in the Main Auditorium of the Salt Lake City Public Library, 210 E. 400 S. Holocaust Day will be marked by activities, including the governor’s proclamation and the lighting of a candle by Abe Fox, a Holocaust survivor. For details, contact Laura Green at 801-581-0102, extension 133.

Throughout the month of April, yellow cloth Jewish stars will be available for University of Utah faculty, staff and students as well as community members to wear in order to raise awareness of the identity badges that were imposed on Jews and worn by non-Jews in sympathy with the plight of their fellow citizens in Holland. The cloth stars distributed on campus carry a similar message. The cloth stars are available from the Office of the Associate Vice President for Diversity, 204 Park Building, 201 Presidents Circle. For more information on obtaining the stars, call 801-581-7569.

The University of Utah Days of Remembrance events are sponsored by the U of U Office of the Associate Vice President for Diversity and are supported by the I.J. & Jeanné Wagner Jewish Community Center, the University Department of History, the United Jewish Federation of Utah, the Obert C. and Grace A. Tanner Humanities Center and University Marketing & Communications. For more information on Days of Remembrance activities, visit http://www.diversity.utah.edu/dor2006.html or call 801-581-7569.