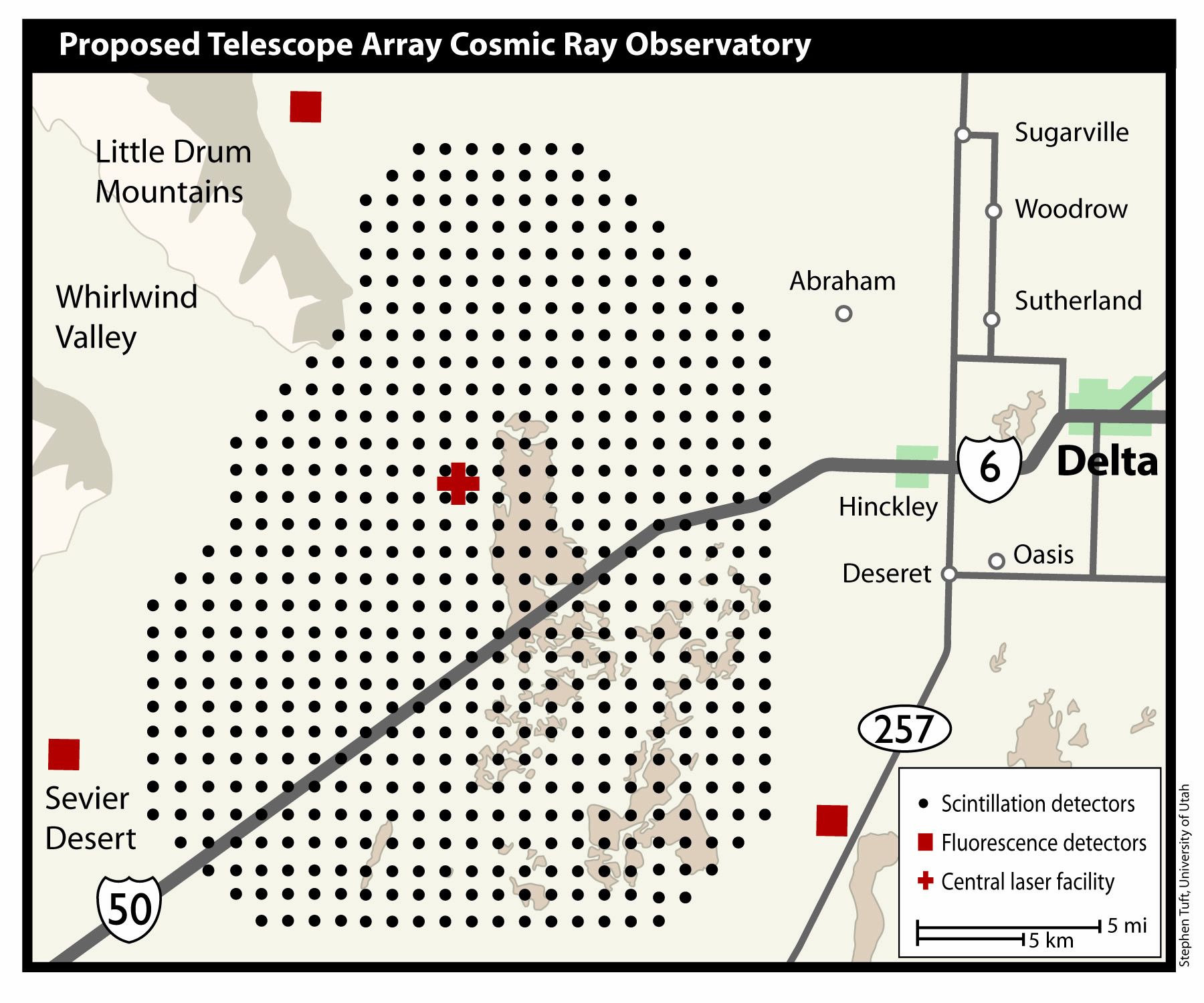 January 12, 2004 — The University of Utah and a group of Japanese and U.S. universities plan to build a $17 million to $18 million cosmic ray observatory named the Telescope Array in central Utah’s Millard County. It will try to determine the mysterious source of the most energetic particles in the universe.

Japan’s government has promised $12 million to build the observatory. American universities hope to raise another $5 million to $6 million in U.S. government grants by mid-2005 to enhance the observatory’s capabilities, says Pierre Sokolsky, professor and chair of physics at the University of Utah. Construction is slated to begin this spring, and should be complete by late 2007.

All three projects seek to understand a major puzzle: What incredibly powerful phenomenon in the universe is hurling ultrahigh-energy cosmic rays through space?

A Mystery of the Universe

Cosmic rays, discovered in 1912, are subatomic particles: the nuclei of atoms such as hydrogen, oxygen, carbon, nitrogen or iron. Medium-energy cosmic rays come from exploding stars, while the sun and other stars emit even lower-energy cosmic rays.

But the source of ultrahigh-energy cosmic rays is unexplained. They are 100 million times more energetic than anything produced by particle smashers on Earth. Scientists theorize they may come from noisy radio galaxies, supermassive black holes at the centers of active galaxies, shock waves from colliding galaxies, bizarre sources such as so-called cosmic strings or even from the decay of massive particles left over from the “big bang” that scientists believe formed the universe about 13 billion years ago.

“Something out there is producing subatomic particles with energies that a lead brick has when you drop it on your toe,” Sokolsky says. “Whatever it is, it is the most energetic mechanism we know of in the universe short of the big bang.”

Physicists around the world hope to find the answer in Utah’s western desert.

“The vast open land and dark, clear night sky are essential for the success of our experiment,” says Masaki Fukushima, a physicist at the University of Tokyo Institute for Cosmic Ray Research and leader of Japanese scientists working on the Telescope Array. “We are happy to work with Utah colleagues who pioneered the study of the tiniest, most energetic particles in the universe – particles we believe carry the secret of the big bang.”

The Telescope Array will be built in open rangeland west of Delta, Utah, where high school students and other residents have helped in preparing the project.

“There’s a feeling of excitement at wanting to uncover the mysteries of the universe,” says Utah state Rep. Michael Styler, R-Delta, among government officials in Millard County who met University of Utah scientists on Jan. 9 to discuss the Telescope Array and Auger Project. “We are especially happy to have it in our own backyard.”

The Telescope Array will include two types of devices scattered over a large area:

— Three fluorescence detectors – sets of mirrors that detect faint blue flashes in the night sky caused when cosmic rays hit atmospheric gas molecules – will be built on three hills: Black Rock Mesa 13 miles south-southwest of Delta, Long Ridge 30 miles southwest of Delta, and between the Drum and Little Drum Mountains 25 miles northwest of Delta. The university plans to lease the sites from Utah’s School and Institutional Trust Lands Administration, and expects to start construction this spring. A Central Laser Facility, which will shoot laser beams skyward to test the mirrors, will be built on leased federal land equidistant from the three hills. If the additional $5 million to $6 million can be raised, another one or two fluorescence detector sites might be added in the future, Martens says.

— A “ground array” of 576 scintillation detectors will be installed in a vast grid on a roughly 18-by-22-mile area west of Delta, Hinckley and Deseret, sharing the grazing land with cattle. When a cosmic ray hits atmospheric gases, it causes a cascade or “air shower” of other subatomic particles that reach the ground and will be measured by the scintillation detectors. Each detector will contain a flat plastic plate that produces a measurable pulse of light when hit by the particles.

Roads exist to the three fluorescence detector sites, although improvements will be needed on some stretches to Black Rock Mesa and Long Ridge, Martens says. Scientists will use existing roads and ATVs if necessary to install the scintillation detectors, which should need maintenance only rarely.

The University of Utah is a pioneer in cosmic ray research. After atmospheric humidity stymied a 1950s effort to observe cosmic rays from upstate New York, University of Utah physicists built a prototype in New Mexico in 1976, constructed the Fly’s Eye at Dugway Proving Ground during 1980-1981, improved it in 1986, and then upgraded it during 1994-1999 and renamed it the High-Resolution Fly’s Eye. The name comes from the use of fly-like multifaceted mirrors to observe the sky.

The highest-energy cosmic ray ever detected was measured in 1991 by the Fly’s Eye. It had an energy of 300 billion billion electron volts (billion twice is correct), and would feel like a fast-pitched baseball if it could penetrate the atmosphere and hit a person in the head.

Operation of the High-Resolution Fly’s Eye has become difficult – especially for foreign students and faculty – due to its presence on a military base. For two years after the Sept. 11, 2001, terrorist attacks on the World Trade Center and Pentagon, the University of Utah had to hire people with security clearances to enter Dugway and operate the observatory.

Meanwhile, a Japanese cosmic ray observatory named AGASA – which uses scintillation detectors like those proposed for the Telescope Array – has operated for 10 years but will be dismantled next year. Clouds, humidity and air pollution make more sensitive fluorescence-detector observatories there impractical, Sokolsky says.

One key goal for the Telescope Array is to determine why the High-Resolution Fly’s Eye has detected far fewer ultrahigh-energy cosmic rays than AGASA. It also will seek to explain an apparent shortage of cosmic rays that are about 100 times less powerful than the most energetic particles.

In 1996, an international group of physicists proposed building the Pierre Auger Project: twin $50 million cosmic ray observatories in Argentina and Utah. (Auger was a physicist who discovered air showers in 1938.) U.S. science agencies decided to finance the Argentina observatory first to look for cosmic rays in southern skies. Construction is underway there, and the first scientific results are anticipated in 2005, says University of Utah physicist Paul Sommers.

Scientists at the University of Utah and elsewhere expect to seek federal funding in 2005 to build the Auger project’s northern observatory. They hope to begin construction in late 2006. If it is built in Utah rather than Colorado, 1,657 water tanks would be installed in a grid pattern south of Delta and west of Fillmore, covering 1,200 square miles – an area five times larger than the Telescope Array. The tanks detect blue flashes of Cherenkov light created when cosmic ray air shower particles hit the water.

If both the Telescope Array and northern Pierre Auger observatory are built, physicists will be able to measure cosmic rays simultaneously with three kinds of detectors: fluorescence, scintillation and Cherenkov. Sokolsky says that will allow them to study cosmic rays with a wide range of energies – from high to ultrahigh – to gain a better understanding of their source.