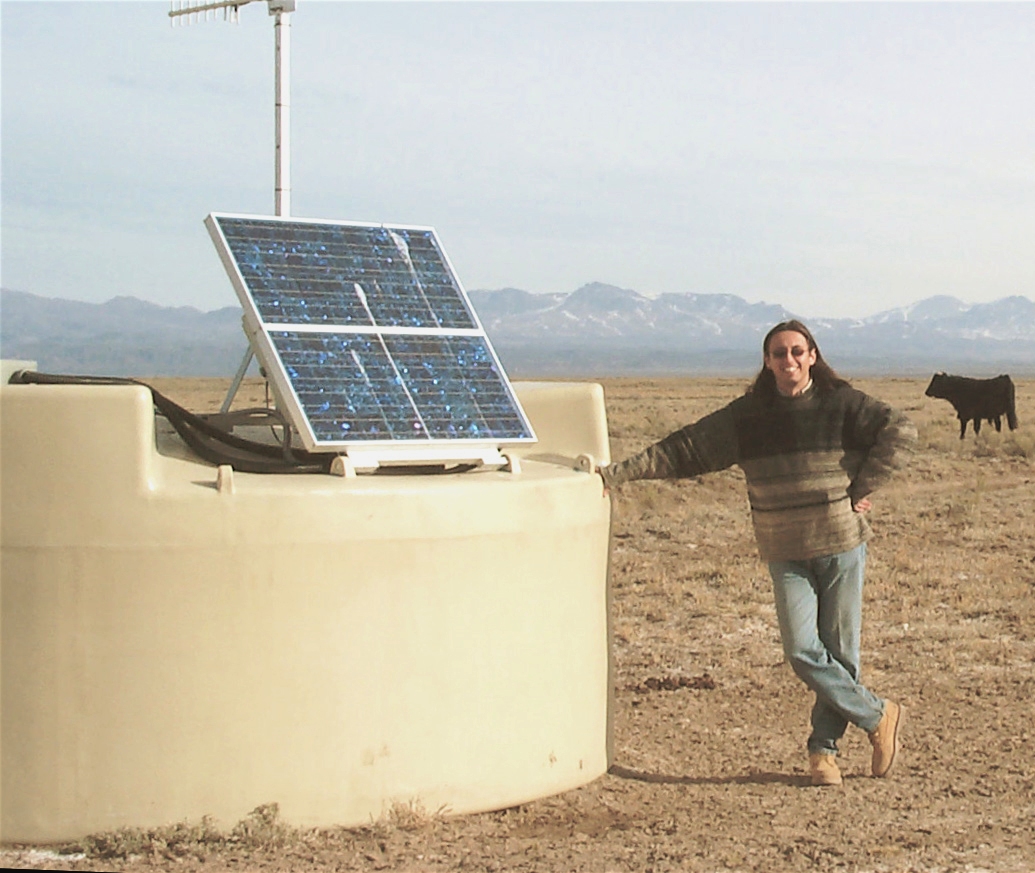 Nov. 8, 2007 – The most energetic particles in the universe – ultrahigh-energy cosmic rays – likely come from supermassive black holes in the hearts of nearby active galaxies, says a study by scientists from nearly 90 research institutions worldwide, including the University of Utah.

“We discovered the sources of the highest energy particles in the universe,” says Miguel Mostafa, an assistant professor of physics at the University of Utah and one of 370 scientists and engineers belonging to a 17-nation collaboration that operates the $54 million Pierre Auger Observatory in Argentina.

“The sources are the center regions of very active galaxies which host violent black holes” and are known as “active galactic nuclei,” he adds. “Now that we found the sources, we are one step closer to knowing what physical process can accelerate particles to these ultrahigh energies. Right now, we don’t know.”

The study by the Pierre Auger Collaboration is being published in the Friday, Nov. 9 issue of the journal Science. Members of the collaboration at the University of Utah are Mostafa; physicist and Dean of Science Pierre Sokolsky; postdoctoral research associate Patrick Younk; and physics graduate student David Thomas. Two undergraduate students – Joshua Schmeiser and Felix Lau – also work on the project.

Black holes are collapsed stars with gravity so strong that nothing – not even light – can escape once it has fallen past the black hole’s “event horizon.” Scientists believe most galaxies, including ours, host supermassive black holes, which contain the mass of up to a few billion stars like our sun.

When matter is sucked into supermassive black holes, the process also spews out various particles and electromagnetic radiation, from gamma and X-rays to ultraviolet, visible and infrared light, and radio waves. A galaxy with a compact center that is extremely, persistently bright in all or some wavelengths is known as an active galactic nucleus (AGN). Only a fraction of galaxies with supermassive black holes are AGNs.

From the Fly’s Eye to the Auger Observatory

Cosmic rays, discovered in 1912, are subatomic particles, including nuclei of atoms such as hydrogen, oxygen, carbon, nitrogen or iron. Medium-energy cosmic rays come from exploding stars. The sun and other stars emit lower-energy cosmic rays. The source of ultrahigh-energy cosmic rays has been unexplained. They are 100 million times more energetic than anything produced by the most powerful particle smashers on Earth.

Suspected sources have included not only supermassive black holes in active galactic nuclei, but also noisy radio galaxies, shock waves from colliding galaxies, and bizarre sources such as so-called cosmic strings or the decay of massive particles left over from the “big bang” that scientists believe formed the universe 13 billion years ago.

The highest-energy cosmic ray ever detected was measured in 1991 by the University of Utah’s Fly’s Eye observatory on the U.S. Army’s Dugway Proving Ground. It had an energy of 300 billion billion electron volts (billion twice is correct, or 3 times 10 to the 20th power electron volts). The single subatomic particle would feel like a fast-pitched baseball if it could penetrate the atmosphere and hit a person in the head.

In 1996, an international group of physicists proposed building the Pierre Auger Project: twin $50 million cosmic ray observatories in Argentina and Utah. (Auger was a French physicist who, in 1938, discovered “air showers” of particles produced when incoming cosmic rays hit gas in Earth’s upper atmosphere.) The Argentina observatory was built first to look for cosmic rays in southern skies. The Northern Hemisphere observatory now is planned for Colorado.

Construction in Argentina started in 1999. The Auger Observatory – the world’s largest cosmic ray observatory – began collecting data in 2004. The observatory includes a 1,200-square-mile grid of 1,600 large, instrumented water tanks – which detect particles from air showers – and four sites with a total of 24 telescopes that detect faint fluorescent flashes in the sky caused when a cosmic ray particle triggers an air shower.

In the study in Science, the Auger collaboration reports the observatory has recorded 77 cosmic rays with ultrahigh-energies above 40 billion billion electron volts (billion twice is correct, or 4 times 10 to the 19th power electron volts).

Of the 27 most energetic events – those with energies above 57 billion billion electron volts – 20 come from the direction of the known locations of some of the 318 active galactic nuclei with the Auger Observatory’s field of view, Mostafa says.

If the cosmic rays were coming randomly from all directions, only five or six would correlate with the known locations of the active galaxies, he adds.

The researchers report there is less than a one-in-100 chance that the correlation between ultrahigh-energy cosmic rays and active galactic nuclei is random, not real.

Mostafa says the galaxies spewing super-energetic cosmic rays must be relatively close to our Milky Way galaxy, within a distance of 100 megaparsecs, which works out to 326 million light years or 1,920 billion billion miles. (Billion twice is correct).

“This is our local neighborhood in cosmic terms,” he says.

Most ultrahigh-energy cosmic rays from greater distances would lose energy before they reach Earth because they interact with cosmic microwave background radiation – the “afterglow” of the “big bang.”

The University of Utah’s Contributions

Mostafa’s group at the University of Utah played a key role in designing, building and operating two lasers and four lidar (light detection and ranging) devices to monitor dust, clouds, water vapor and other atmospheric conditions above the Auger Observatory.

The devices ensure the accuracy of the fluorescence telescopes by helping scientists determine how much light is generated by a cosmic ray air shower, and how much that light is enhanced when it scatters off dust and vapor in the atmosphere.

Mostafa’s geometrical reconstruction method also will help physicists learn more about the specific process responsible for hurling ultrahigh-energy cosmic rays across space. While the black holes are thought to accelerate cosmic rays, another kind of theory holds that the highest-energy cosmic rays are photons – light particles – produced by the decay of superheavy particles left over from the birth of the universe. Mostafa’s method shows there are few if any photons with energy levels consistent with such theories.

The University of Utah is a pioneer in cosmic ray research. After atmospheric humidity stymied a 1950s effort to observe cosmic rays from upstate New York, University of Utah physicists built a prototype in New Mexico in 1976, constructed the Fly’s Eye at Dugway Proving Ground during 1980-1981, improved it in 1986, and then upgraded it during 1994-1999 and renamed it the High-Resolution Fly’s Eye. The name comes from the use of fly-like multifaceted mirrors to observe the sky.

The Hi-Res Fly’s Eye is shutting down and some of its equipment is being moved to the new $17 million Telescope Array cosmic ray observatory, which was built west of Delta, Utah, by the University of Tokyo and University of Utah.

Meanwhile, Mostafa’s group is responsible for designing the fluorescence detectors at the planned northern Auger Observatory in southeast Colorado near Lamar.

For information and photos on the Auger Observatory, see: http://www.auger.org/media

This news release and a downloadable, high-resolution photo of Mostafa are available at: