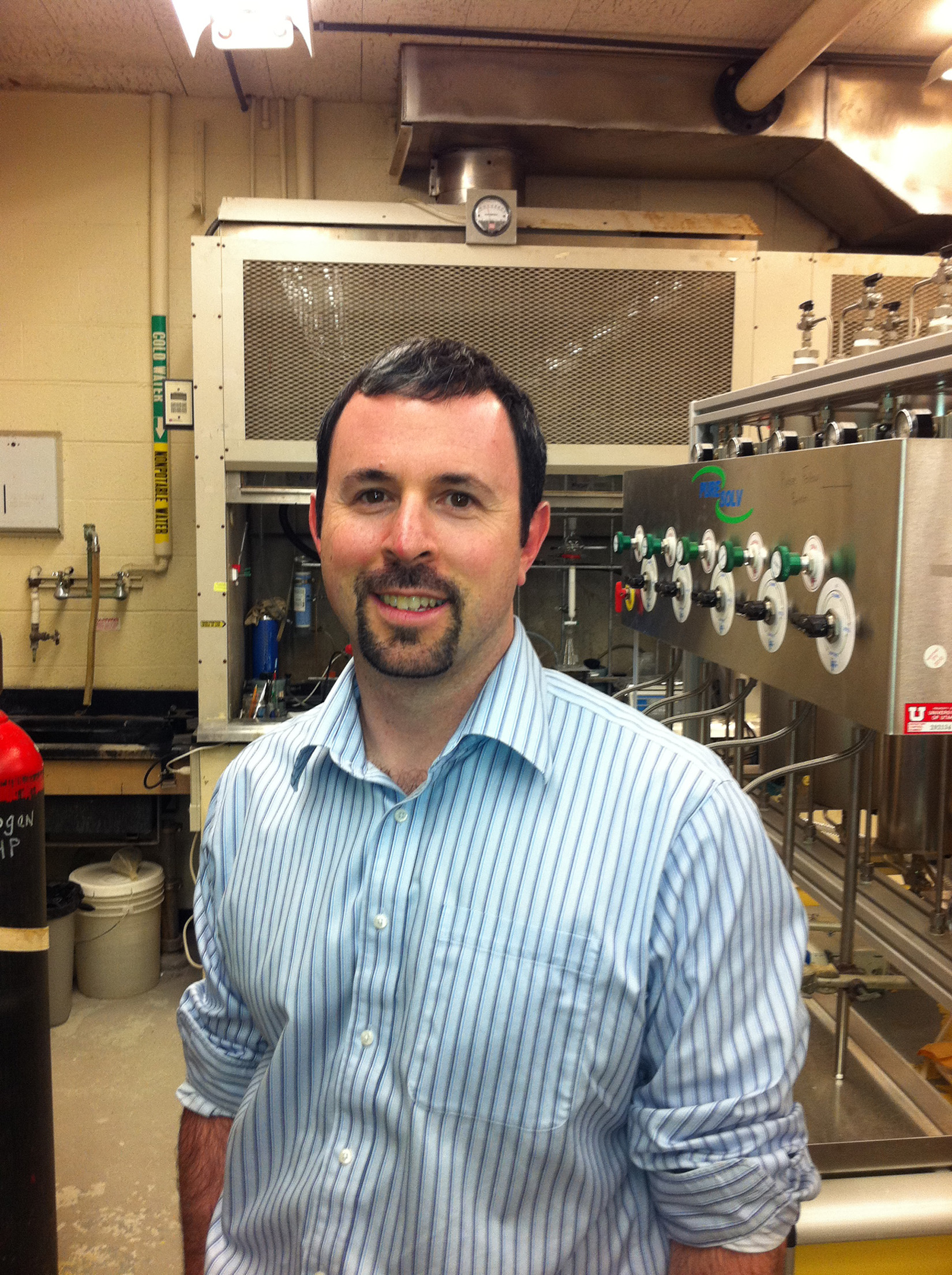 Sept. 29, 2011 – University of Utah chemists developed a method to design and test new catalysts, which are substances that speed chemical reactions and are crucial for producing energy, chemicals and industrial products. By using the new method, the chemists also made a discovery that will make it easier to design future catalysts.

The discovery: the sizes and electronic properties of catalysts interact to affect how well a catalyst performs, and are not independent factors as was thought previously. Chemistry Professor Matt Sigman and doctoral student Kaid Harper, report their findings in the Friday, Sept. 30, 2011, issue of the journal Science.

“It opens our eyes to how to design new catalysts that we wouldn’t necessarily think about designing, for a broad range of reactions,” Sigman says. “We’re pretty excited.”

Sigman believes the new technique for designing and testing catalysts “is going to be picked up pretty fast,” first by academic and then by industrial chemists, who “will see it’s a simple way to rapidly design better catalysts.”

The new study was funded by the National Science Foundation.

‘Catalysts Make the World Go ‘Round’

Catalysts speed chemical reactions without being consumed by those reactions. Their importance to society and the economy is tough to overstate. Products made with catalysts include medicines, fuels, foods and fertilizers.

Ninety percent of U.S. chemical manufacturing processes involve catalysts, which also are used to make more than one-fifth of all industrial products. Those processes consume much energy, so making catalytic reactions more efficient would both save energy and reduce emissions of climate-warming carbon dioxide gas.

The Utah researchers developed a new method for rapidly identifying and designing what are known as “asymmetric catalysts,” which are catalyst molecules that are considered either left-handed or right-handed because they are physically asymmetrical. In chemistry, this property of handedness is known as chirality.

“Handedness is an essential component of a drug’s effectiveness,” Sigman says.

Drugs generally work by latching onto proteins involved in a disease-causing process. The drug is like a key that fits into a protein lock, and chirality “is the direction the key goes” to fit properly and open the lock, says Sigman.

“However, developing asymmetric catalysts [to produce asymmetric drug molecules] can be a time-consuming and sometimes unsuccessful undertaking” because it usually is done by trial and error, he adds.

Sigman says the new study “is a step toward developing faster methods to identify optimal catalysts and insight into how to design them.”

A Mathematical Approach to Catalyst Design

Harper and Sigman combined principles of data analysis with principles of catalyst design to create a “library” of nine related catalysts that they hypothesized would effectively catalyze a given reaction – one that could be useful for making new pharmaceuticals. Essentially, they used math to find the optimal size and electronic properties of the candidate catalysts.

Then the chemists tested the nine catalysts – known as “quinoline proline ligands” – to determine how well their degree of handedness would be passed on to the chemical reaction products the catalysts were used to produce.

Sigman and Harper depicted results of the reactions using the different catalysts as a three-dimensional mathematical surface that bulges upward. The highest part of the bulge represents those among the nine catalysts that had the greatest degree of handedness.

This technique was used – and can be used in the future – to identify the optimal catalysts among a number of candidates. But it also revealed the unexpected link between the size and electronic properties of catalysts in determining their effectiveness in speeding reactions.

“This study shows quantitatively that the two factors are related,” and knowing that will make it easier to design many future catalysts, Sigman says.