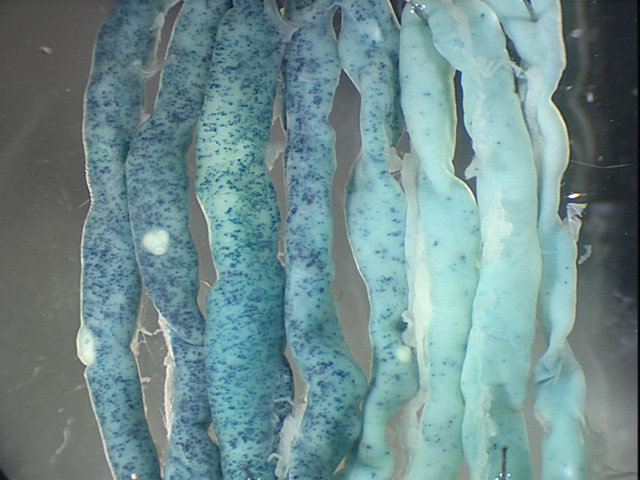 June 8, 2008 – A single organ may contain more than one type of adult stem cell – a discovery that complicates prospects for using the versatile cells to replace damaged tissue as a treatment for disease, according to a new study from the laboratory of geneticist Mario Capecchi, the University of Utah’s Nobel Laureate.

In the June 8 online issue of the journal Nature Genetics, Capecchi and geneticist Eugenio Sangiorgi report that when they used a gene named Bmi1 to mark the presence of adult stem cells in the intestines of mice, they were surprised to find the specific cells mostly in the upper third of the mouse intestine.

That indicates at least one or two other types of adult stem cells must exist to maintain and repair the middle and lower thirds of the mouse’s guts. The small intestine in a mouse is almost 12 inches long if stretched from end to end.

The new discovery “is important because people are talking about stem cell therapy; they want to stick in stem cells to treat disease,” says Capecchi, a winner of the 2007 Nobel Prize in Physiology or Medicine.

“People always thought about a uniform stem cell population in each organ, but now we are saying there are multiple stem cell populations in a given organ, so if you’re going to do therapy, you have to recognize this complexity,” adds Capecchi, co-chair and distinguished professor of human genetics at the University of Utah and an investigator with the Howard Hughes Medical Institute.

If more than one kind of adult stem cell is required to generate the intestinal lining, “it wouldn’t be surprising to see it is true for other organs as well,” Capecchi says.

Capecchi won the Nobel – with Sir Martin Evans and Oliver Smithies – for developing gene targeting, a method of using embryonic stem cells to “knock out” genes in mice, then observing what goes wrong to determine any gene’s normal function.

Getting to the Guts of Adult Stem Cells

Stem cells in the intestine are among the best studied. They are required to produce new cells for the intestinal lining as older ones wear out every two to five days.

“It’s a hell of an environment,” Capecchi says. “Food is being thrown in there, and enzymes to break down that food. This is a way of maintaining the intestine intact.”

The intestinal adult stem cells give rise to various cells in the small intestine: cells to absorb foods; cells to secrete mucus that make the lining smooth and protect it; cells involved in protecting the organism against bacteria and other disease organisms; and cells that produce substances involved in communication among cells.

But researchers have had trouble identifying the stem cells so they can be studied.

Dutch researchers recently found a “marker” named Lgr5 to label intestinal stem cells. Sangiorgi and Capecchi used a similar method but a different “marker” – a gene name Bmi1 – which is “expressed” or activated in adult stem cells in the intestinal lining.

Labeling stem cells containing the Bmi1 gene involved tamoxifen, a drug used to treat and prevent breast cancer. Tamoxifen was used to activate an enzyme in cells that contain the Bmi1 gene so that the cells appeared blue when viewed under a microscope.

“We decided to hijack this gene to identify and label adult stem cells in the mouse intestine,” Sangiorgi says.

Sangiorgi and Capecchi showed the cells they labeled with Bmi1 indeed were adult intestinal stem cells because they had two key properties: they self-renewed, or made more copies of themselves, and they gave rise to multiple kinds of other cells.

The stem cells, labeled blue, become various intestinal cells that are replaced about every five days. Yet the blue color was seen in intestinal tissue a year later, showing the stem cells within the tissue were renewing themselves, dividing and making new adult stem cells.

The geneticists also looked at the various kinds of intestinal-lining cells that arose from adult stem cells. All of them carried the blue tag, showing they originated from the adult stem cells.

When the geneticists used diphtheria toxin to kill the intestinal adult stem cells, “we wiped out the small intestine,” says Capecchi. “Adult mice die within two days. That shows these stem cells are important for making the intestine.”

Sangiorgi says the big surprise, however, was that the blue-dyed adult stem cells only appeared in normal concentrations in the upper third of the mouse, growing progressively fewer in number farther down the intestine, suggesting other kinds of adult stem cells must play the key role maintaining the middle and lower intestine.

Other Discoveries about Adult Stem Cells:

There has been debate over where adult intestinal stem cells are found. The Utah geneticists found their Bmi1-marked adult stem cells dividing slowly near the top of the tube-like crypt, where it bubbles out to meet the intestine. The Dutch researchers found their Lgr5-marked cells dividing more rapidly farther down in the crypt, intermingled among “Paneth” cells, which produce enzymes to kill bacteria.

Capecchi sees no contradiction: “We both may be right. We may be looking at different phases of stem cells’ life history,” with the Bmi1-marked cells at an earlier phase and the cells marked by the other gene in a later phase.

“That says stem cell biology may be more complicated than we think, and they may be able to go from one state to another,” and also migrating within crypts, he says. “They are still stem cells but are at different phases of their life cycle.”