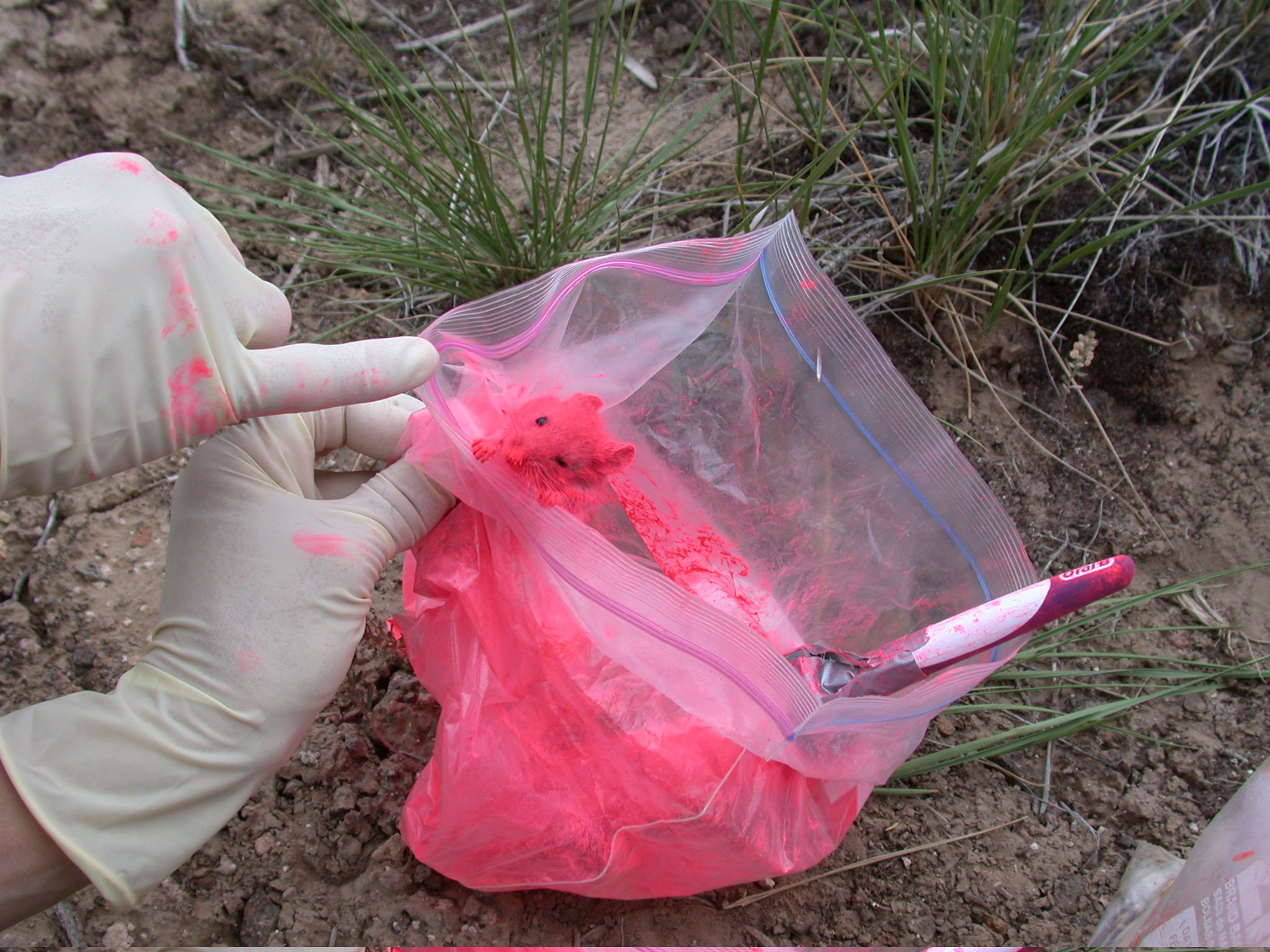 Jan. 6, 2009 – University of Utah researchers dusted wild deer mice with fluorescent pink, blue, green, yellow and orange talcum powders to show which rodents most often fought or mated with others and thus were most likely to spread deadly hantavirus. The study identified bigger, older mice as the culprits.

“If mice were in contact with a powdered mouse, you’d see the colored bite mark on their ear or tail, or color on their genitals,” says Denise Dearing, a University of Utah professor of biology and senior author of the study published online Jan. 7 in the British journal Proceedings of the Royal Society B.

“You knew when they got lucky,” adds Christy Clay, who ran the study as part of her University of Utah Ph.D. thesis under Dearing’s supervision.

Radio transmitters were implanted in other mice to track their contacts during the study, which is the first to show that the so-called “20-80 rule” applies to a disease that is directly transmitted among members of a single species of wildlife. The rule – which Dearing calls “more a concept than a rule” – says that a small fraction of a population (roughly 20 percent) accounts for most (about 80 percent) of disease transmission.

The study found that the mice that most frequently had contact with other mice averaged 11 percent heavier than the rest of the population.

“Because Sin Nombre virus [the specific hantavirus] is transmitted through direct contacts, the results suggest that larger-bodied individuals are responsible for maintaining hantavirus in deer mice populations,” Dearing says.

“The biggest individuals are most likely to be the ones with the largest foraging range because they have to get more food,” says Clay. “Or they could be territorial, so they are defending a nest or their food resource. If they are bigger, they are older, so they may have more experience in defending their territory,” than younger mice.

Dearing says earlier research found that hantavirus-infected mice tend to be larger than uninfected mice. “But they didn’t examine contacts between individuals,” she says. Those studies “imply these [heavier] animals likely have more contacts, and that’s why they are infected. Now we have shown what others suspected.”

Contrary to the researchers’ expectations, body size was the only factor they studied that affected how often and for how long mice had contact with other deer mice – not whether the mice were male or female or were ready for breeding. Previous studies had suggested males have higher infection rates because they fight more often. Other research shows vegetation and precipitation also affect hantavirus transmission.

Clay says the 20-80 rule never before has been seen in a disease transmitted by direct contact from a member of any wildlife species to another member of the same species. It has been seen in sexually transmitted diseases in humans, including AIDS, and in SARS (severe acute respiratory syndrome), in which few people are responsible for transmitting the virus to others, she says. The rule also holds true for humans with measles, monkeypox and smallpox.

The rule also has been shown in indirectly transmitted diseases such as the West Nile virus, in which a few birds are responsible for infecting many of the mosquitoes that feed on bird blood and then spread the virus to humans and other animals, says Clay. It also has been shown in tick-borne encephalitis: fatter, older mice host the most ticks, which feed on their blood and spread the disease to other mice and humans.

“We are not proposing you exterminate larger mice” although they are most likely to spread hantavirus, Clay says, noting the wildlife food chain depends on mice. “But if you could identify places where the animals are older and heavier, then ostensibly you could make a risk map” to show humans living in rural areas where precautions are most necessary, including avoid breathing dust when sweeping up mouse droppings.

Dearing and Clay – now an assistant professor of biology at Westminster College in Salt Lake City – did the study with University of Utah postdoctoral researchers Erin Lehmer (now at Fort Lewis College in Colorado) and Andrea Previtali, and virologist Stephen St. Jeor at the University of Nevada, Reno.

A Short History of Hantavirus

In May 1993, an outbreak of a mysterious lung disease appeared in the Four Corners region where the boundaries of Utah, Arizona, New Mexico and Colorado meet. After two deaths among young Navajos were linked, other cases soon were discovered, and the federal Centers for Disease Control (CDC) and other agencies found the disease was caused by a previously unknown type of hantavirus, carried primarily by the deer mouse, Peromyscus maniculatus.

“These mice are mostly solitary, so when they come into contact they either are mating or fighting or fleeing,” Dearing says.

The new hantavirus was named the Sin Nombre virus, and the disease it caused was named hantavirus pulmonary syndrome. Experts showed the disease wasn’t spread among people, but from mice to people, often when mouse droppings were inhaled.

The latest, but outdated figures on the CDC Web site show that from the 1993 outbreak through March 26, 2007, there were 465 cases of hantavirus pulmonary syndrome in the United States, and 35 percent of the patients died.

Thirty states – including most of the western half of the United States – have reported cases. Almost half of all cases have been within the Four Corners states.

The 1993 outbreak came after years of drought, followed by heavy rain and snow in early 1993, leading to an abundance of food plants and a tenfold increase in the deer mouse population.

Catch, Mark and Release: Tracking the Loves and Fights of Deer Mice

While the new study examined physical contacts among deer mice that potentially can lead to transmission of hantavirus, Dearing says blood samples showed an average of 25 percent to 30 percent of mice in the study were infected.

The researchers – including a field crew of biology undergraduates – documented contacts among deer mice at 12 sites of 7.7 acres each in Utah’s Juab County. The sites are on federal land in the western Utah desert near the West Tintic Mountains.

Since 2002, Dearing’s team has surveyed the 12 sites twice a year, trapping and releasing almost 5,000 individual rodents. The new study is based on data collected in 2005, when mice were studied for 15 days during spring and 15 days during fall.

For three nights at each site, deer mice were captured with 148 animal traps arrayed like a wagon wheel’s spokes and baited with oats, peanuts and peanut butter.

Captured animals were identified to species, sex, weight and breeding condition. Captured mice were marked with numbered ear tags. Their blood was sampled. Some of the released animals were implanted with individually coded radio transmitters (like those used on pets) or marked with powder to track their contacts:

The researchers found that neither the number nor the duration of a mouse’s contacts with other mice correlated with the likelihood of hantavirus infection, but when both factors were considered, there was a correlation. That means a few long contacts or many short contacts both play roles in whether a mouse spreads hantavirus:

And the mice with the most contacts were one-ninth heavier than the average. That’s still small. Not counting their tails, deer mice range in length from roughly 1.5 inches for juveniles to 4 inches for adults.

Dearing says the results of the new study and previous research suggests that low turnover in a deer mouse population – in other words, populations where mice grow older and bigger due to better food, cover or nesting sites – often is associated with a high rate of hantavirus spread among mice.