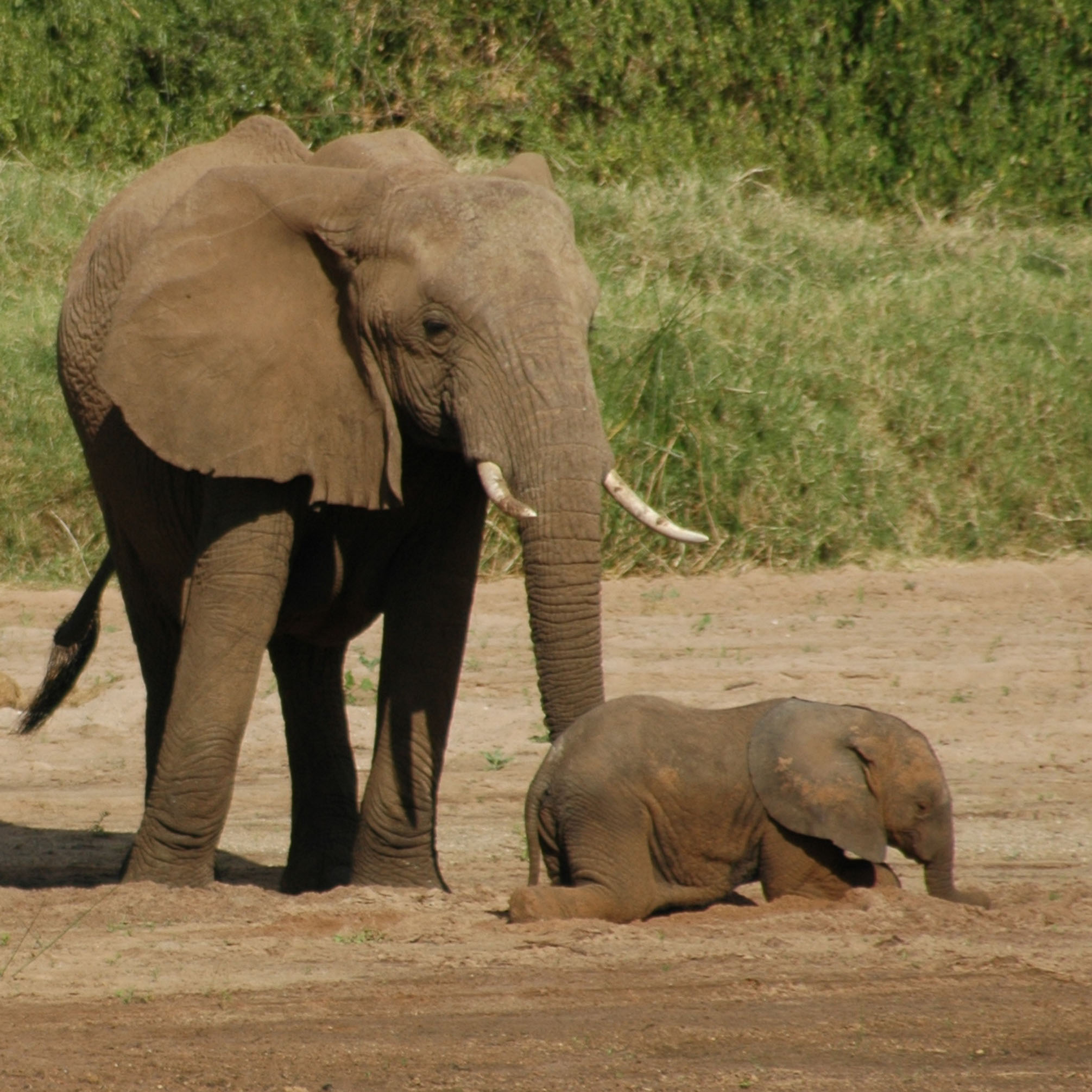 Jan. 2, 2006- By analyzing chemicals in tail hair from elephants that wore radio collars, researchers tracked the diet and movements of elephants in Kenya – a method aimed at reducing human-elephant conflicts and determining where to establish sanctuaries to protect the endangered creatures.

“This is a new method to understand elephant behavior and help ensure their survival,” says geochemist Thure Cerling, the study’s principal author and a distinguished professor of geology-geophysics and biology at the University of Utah.

The findings are being published in the Jan. 3-6, 2006, online edition of the journal Proceedings of the National Academy of Sciences, and in the journal’s Jan. 10 print issue.

The study involved analysis of “stable isotopes” of carbon and nitrogen in African elephants’ tail hair to determine what and where they ate as they also were tracked with Global Positioning System (GPS) collars. Stable isotopes previously have been used to track sources of counterfeit currency, illicit drugs, explosives and bacteria like anthrax.

Among the elephants tracked in the study was a bull named Lewis, who ate lowland grasses in a sanctuary during rainy times, then trekked 25 miles to the mountains, where he ate shrubs and trees by day and raided farmers’ corn fields at night. He was shot after the study was completed, possibly by a farmer.

“One big question is how can we secure a future for elephants when we know that the areas set aside for their protection are too small,” says study co-author and zoologist Iain Douglas-Hamilton, founder, president and chief executive officer of the Save the Elephants Foundation in Nairobi, Kenya.

Elephants are endangered internationally, but “their actual status varies from local abundance in parts of southern Africa and in some protected areas elsewhere, to critically endangered in vast regions of central Africa,” says Douglas-Hamilton, who helped bring about a global ivory trade ban after chronicling the massacre of elephants in the 1980s.

“Since they need space to roam and since the human population is increasing within elephant range, there is inevitable conflict,” he adds. “Tracking an elephant’s diet through stable isotopes defines essential elephant dietary needs and can help inform land use planning. … The fine information from the isotopes and actual elephant tracking can help us define the critical minimum space needed by elephants and other animals.”

Cerling and Douglas-Hamilton conducted the study with George Wittemyer, a doctoral student at the University of California, Berkeley; biologist Fritz Vollrath and doctoral student Henrik Rasmussen at Oxford University; and two University of Utah undergraduate lab workers: Claire Cerling, who is Cerling’s daughter, and Todd Robinson.

How Isotopes in Elephant Tail Hair Reveal Climate and Diet

Isotopes are different weights or forms an element. Stable isotopes are those that do not decay radioactively. Because environmental factors affects the proportions of various isotopes of hydrogen, oxygen, carbon and nitrogen in animals, plants, soil and air, stable isotope analysis has been used as a way to learn how ecosystems work.

In recent years, University of Utah biologist James Ehleringer pioneered analysis of stable isotopes to study “the ecology of terrorism,” using the method to determine where drugs were grown or processed, where counterfeit currency was produced, where explosives were manufactured and even where bacteria similar to anthrax were cultured.

Cerling, meanwhile, has used the method to learn about prehistoric climates and environments. He has estimated how carbon dioxide levels in Earth’s atmosphere varied over time millions of years ago by analyzing the proportions of different carbon and oxygen isotopes in prehistoric soils and animal teeth.

In the new study, Cerling and colleagues analyzed hair in the tails of African elephants in Samburu National Reserve in Kenya. The foot-long hairs were collected when the elephants were briefly immobilized with drug-laden dart guns so they could be fitted with GPS radio-tracking collars or new batteries for the collars.

Save the Elephants has placed 80 GPS collars in elephants in the past decade to identify elephant habitats and their travel corridors. Goals include preserving habitats, protecting corridors and minimizing conflicts with humans.

— Ratios of rare nitrogen-15 to common nitrogen-14 in tail hair revealed information about diet and environment. Plants in dry areas like Samburu have high ratios, while plants in wetter areas – such as forests on Mount Kenya – have lower ratios.

The Findings: You (Elephants) Are What You Eat

Isotopes in the tail hair of six elephants had high ratios of nitrogen-15 to nitrogen-14, indicating they spent their time in the arid lowlands of Samburu. Most of the time, they had low ratios of carbon-13 to carbon-12, indicating they ate trees and shrubs. But during the rainy season – as indicated by satellite photos – they had higher ratios of carbon-13 to carbon-12 because they ate grasses that flourished in the wet weather.

“When it gets green, they begin to eat grass,” Cerling says. “When it’s not, they eat trees and shrubs.”

The seventh elephant – the bull named Lewis – was different. Cerling had isotope data from Lewis’ tail hair from 2000 through February 2002, when the hair was removed at the same time a GPS radio collar was placed on Lewis. The collar tracked Lewis from February to July 2002, when it failed. An assumption was made that Lewis’s behavior when GPS tracked him was similar to when he was “tracked” by his tail hair chemistry.

The collar showed that Lewis spent rainy seasons in lowland Samburu, but then trekked 25 miles cross country to the Imenti Forest, some 6,500 feet in elevation on Mount Kenya. While in the forest, he made nighttime raids into subsistence farms.

The collar showed Lewis made three trips between mountain forest and arid lowlands between February and July 2002, with each 25-mile trek taking only 15 hours.

Such behavior is called “streaking” because the elephants “are essentially going as fast as they can,” Cerling says. “They spend their time in one area, and suddenly make this dash across the country and spend a long time in another area. Fewer and fewer elephants do this because the distance between safe areas is getting greater and there are more fences, more guns and more people.”

Lewis’ tail hairs showed he had higher nitrogen-15-to-nitrogen-14 ratios during times he was in the arid Samburu preserve, which produces the “dry” nitrogen isotope signature even during the rainy season. Lewis also had higher ratios of carbon-13 to carbon-12, indicating he went to Samburu during rainy times to eat grass.

At other times, the nitrogen isotope ratio was lower in Lewis’ tail hair, indicating he spent the dry season in the mountains, where he normally ate trees and shrubs. But elevated carbon isotope ratios from mid-June to mid-August 2001 showed Lewis was eating C4 plants too – probably maize during nighttime crop raids.

Cerling says it is “important to quantify how much of elephants’ diet comes from crops. It’s going to help resolve elephant-human conflict by quantifying the crop damage done by elephants. … Areas open to elephants are getting smaller and smaller, so we need to know how important different foods are to their diets in different areas.”

Douglas-Hamilton says that when elephants move, it is for “sustenance, security or sex.” Lewis’ motivation was not security since he crossed dangerous human-occupied territory. But by “streaking” to the mountains during the dry season, Lewis was able to eat corn while the Samburu elephants browsed on trees and shrubs.

“Diet is very important for bull elephants,” says Douglas-Hamilton. “If they are to succeed in sexual contests for females, they need high-quality food to build up their strength, hence the reason for high-risk crop raiding.”

Douglas-Hamilton says the study shows that “tracking stable isotopes in an elephant’s diet – when combined with actual tracking of movements using high-tech remote sensing – provides a powerful new tool for conservationists. It allows us to understand possible elephant motivation and, from this, to see how management plans can be focused on understanding their basic needs for space.”