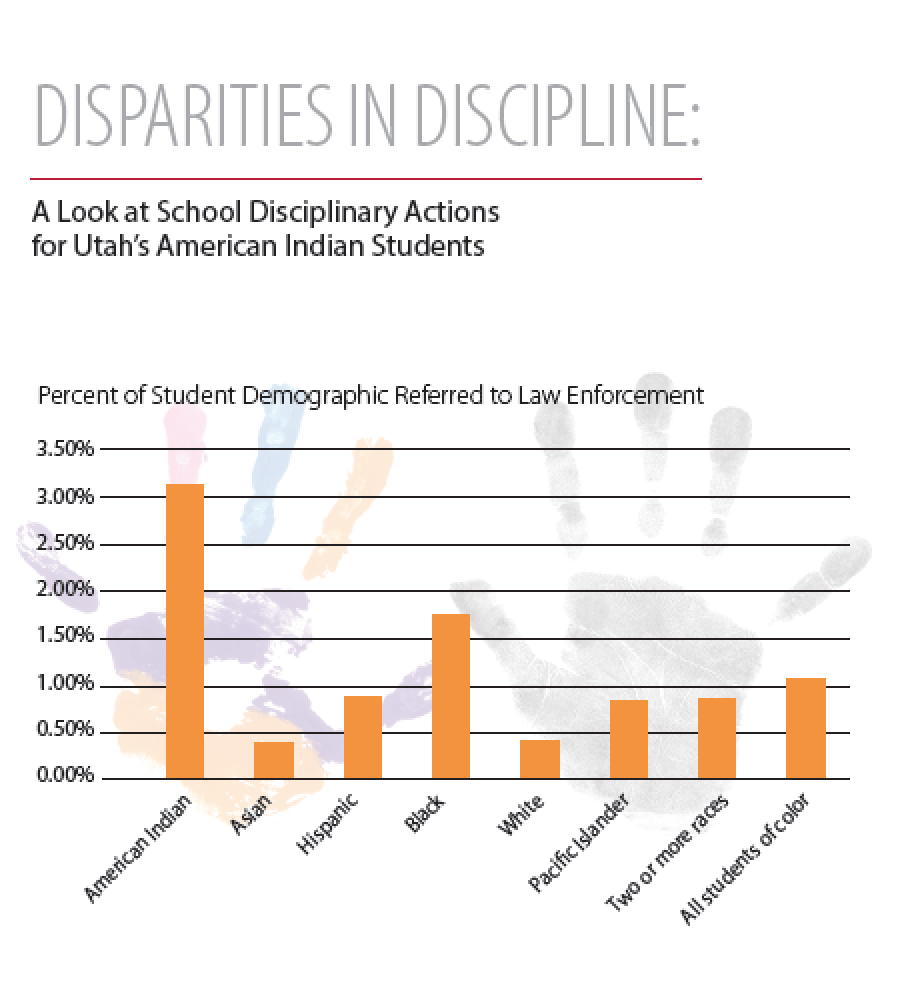 Researcher and law student Vanessa Walsh found that although American Indian students comprise the smallest student demographic in Utah, they have the largest percentage of students referred to law enforcement and arrested at school.  The rates for disciplinary actions taken against American Indian students are much higher than for white students. Studies show that suspension and expulsion rates are closely correlated with dropout and delinquency rates, and have tremendous economic costs. Referrals to law enforcement and arrests at school are the harshest forms of school disciplinary action and expose students directly to the juvenile justice system, said Walsh. Such students often become part of the “School-to-Prison Pipeline,” or STPP, which are practices by schools and law enforcementthat steer schoolchildren out of the classroom and into the juvenile justice system, she added.

In the new report from the Public Policy Clinic, titled “Disparities in Discipline:  A Look at School Disciplinary Actions for Utah’s American Indian Students,” Walsh used U.S. Department of Education data to analyze disciplinary actions taken against all American Indians students in public schools in Utah in 2011, the most recent year for which data was available. That year, there were 7,853 American Indians enrolled in Utah public schools, compared to 460,340 white students. Walsh found:

—American Indian students are seven and a half times more likely to be expelled compared to white students.

—American Indian students are the most likely student population in Utah to be referred to law enforcement. They are three times more likely to receive this action than all other students of color and almost eight times more likely than white students.

—American Indian students are the single most likely student population in Utah to be arrested at school. They are almost four times more likely to receive this action than all other students of color and more than six times more likely than white students.

—Thirty percent of American Indians with a disability under IDEA or Section 504 received a disciplinary action.

“These findings indicate that instead of providing additional resources to a population already very vulnerable to low graduation rates, we are pushing them out of the school system and directly exposing them to the juvenile justice system,” Walsh said.

The research builds on an earlier report by the law school’s Public Policy Clinic in which law students examined school discipline rates in Utah on a broad level. That report, titled “From Fingerpaints to Fingerprints: The School-to-Prison Pipeline in Utah,” also found that U.S. Department of Education data revealed higher discipline rates for Utah’s students of color and students with disabilities, which makes them less likely to graduate high school and succeed later in life.

Walsh’s findings about the American Indian population reaffirm the clinic’s prior research, which suggests reforms are needed to help children find more success in school. Poverty, drug use and other socioeconomic factors are sometimes issues in addition to American Indians being targeted for school disciplinary actions, said Emily Chiang, the clinic’s director and an associate professor of law at the U. Nationally, 22 percent of all American Indian students receive disciplinary action at school, compared to 14.1 percent of all white students.

“Given these special challenges, and the history of what the federal government has done to American Indians, this population probably needs extra help in school —rather than being pushed out of school,” said Chiang,

“If anything, we should be devoting more resources as a state to making sure these kids stay in school.”